The Community and Popular Mass in Solidarity with Nicaragua, officiated by Pastor Luis Barrios Sept. 26, was a resounding success. Hundreds of participants filled Holyrood Church/Iglesia Santa Cruz to hear H.E. Mr. Denis Moncada, Minister of Foreign Affairs of Nicaragua. They came in an organized fashion to show their support and were warmly welcomed. 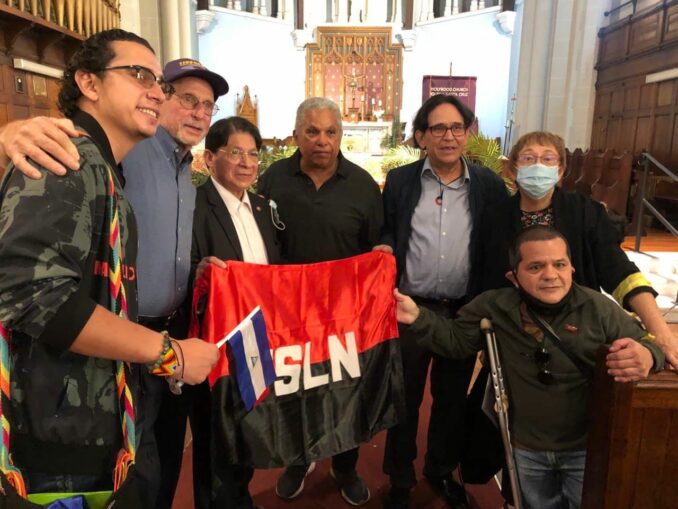 Minister of Foreign Affairs of Nicaragua Denis Ronaldo Moncada Colindres (third from left) and Nicaragua’s Ambassador to the United Nations Jaime Hermida-Castillo (fifth from left), at Holyrood Iglesia Santa Cruz Church. Next to the Ambassador is Venezuelan activist William Camacaro of the Bolivarian Circle.

The entry was secured by numerous community groups who heard that the meeting was threatened. As part of the religious service, both Pastor Barrios and Minister Moncada raised the importance of peace, security and sovereignty for Nicaragua and for all people.

Moncada raised the current situation in Nicaragua in light of the November presidential elections, the Sandinista strategy to protect the country’s sovereignty in the face of sanctions imposed by the U.S. and its allies, and the importance of international solidarity at the current juncture.

The barrage of threats from the Nicaraguan extreme right and their promise to block or disrupt and break up the gathering with hundreds of provocateurs failed miserably. Their grand mobilization was a paltry showing of nine people across the street, shouting and screaming and two people inside the church who held a flag during the mass.

After the Community Mass and Blessing by Barrios, Moncada invited all to stay for an informal dialogue. The handful of opposition forces who had been screaming across the street entered and were given the floor, but they failed to raise even a coherent question or statement. Nevertheless, the minister answered calmly and warmly with full explanations of the accomplishments in health, education and infrastructure of the Sandinista government and the significance of the upcoming democratic election. His confidence showed that he did not fear hostile questions or absurd charges. The dialogue ended with a standing ovation, flags and photos.

Afterwards the frustrated opponents stayed in the church, attempting to continue a confrontation. Members of Holyrood Iglesia Santa Cruz firmly invited them to leave.

Holyrood Iglesia Santa Cruz in Washington Heights, the heart of the Dominican community, is a historic Sanctuary church. The congregation is overwhelmingly migrants from Central and South America and the Caribbean. They have painful experiences with past U.S. wars, sanctions, raids and regime-change operations. The church hosts numerous social and community programs.