Salon workers walk out on Walmart

Workers at the Walmart SmartStyle Salon in Allegany, N.Y., forced management to shut the doors, when all of them quit en masse. They had reached their breaking point after struggling for nine months to get the bosses to listen to their concerns.

Staff member Dana Roth said the issue was not related to COVID or mask mandates, but to matters such as unrelieved heavy work loads. Roth thanked their clients and said that leaving was not an easy decision for any of the staff. A “Closed” sign on the salon door had the message “We Love Our People” and listed where the stylists found new jobs. (Popular Resistance, Sept. 16)

Health care workers across the country

According to the Cornell Labor Action Tracker, there have been 52 strikes by health care workers across the U.S. since September 2020 and 106 labor actions since March 2020. Workers in eight of the strikes were fighting for a first contract.

The other strikes stemmed from issues related to COVID protocols (33 strikes), safety (24 strikes) and staffing (24 strikes). Duration of the strikes ranged from one day to six months. The latter worker action is the ongoing heroic effort of the St. Vincent Hospital nurses in Massachusetts, who are battling for safe staffing for patients. (striketracker.ilr.cornell.edu) 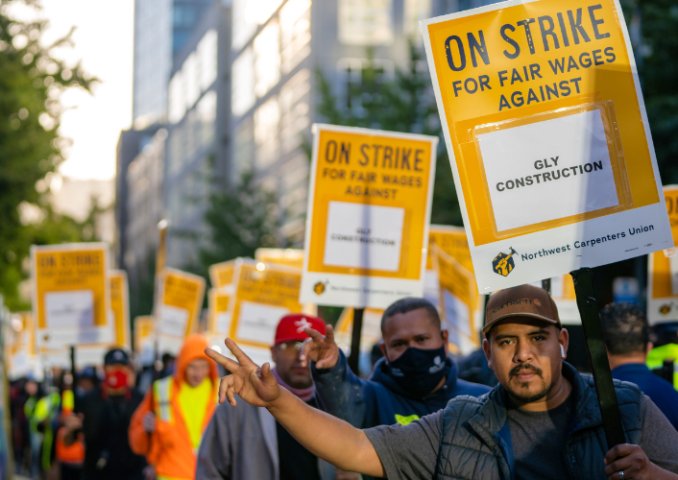 In Washington state, 2,000 carpenters represented by the Northwest Carpenters Union went on strike Sept. 15, halting construction on multimillion-dollar building projects for tech industry giants Facebook, Microsoft and Google. The carpenters, most of whom live in the Seattle area, are demanding a $15-an-hour wage increase over the next three years. The high cost of living in Seattle makes that a reasonable sum.

According to the MIT Living Wage calculator, a single adult with three children living in the Seattle area should make $58.29 per hour. Compensation for parking is also a demand, considering most workers must drive and park at their job sites in downtown areas. Parking fees can range from $20 to $40 a day.

The carpenters have already rejected four tentative agreements from the Association of General Contractors bargaining team. Striking carpenter Jason Bartos has a message for union negotiators: “We can shut this whole city down, but leadership won’t let us [so as] to stay in the good graces of contractors. These guys [on the picket line] are who [the union] works for — not AGC. So you need to start listening to us.” (Labor Notes, Sept. 17)

Rank-and-file members opposing the contracts have organized using a Facebook group named for Peter J. McGuire, the socialist founder of the United Brotherhood of Carpenters and Joiners. McGuire was convinced that reformist measures were futile. He urged workers to abolish the wage system and institute a universal system of cooperative production and distribution. Under his leadership, a national strike in 1890 resulted in 23,000 carpenters in 36 cities gaining the eight-hour day and 32,000 in 234 cities gaining a nine-hour day.

McGuire said of the struggle: “We must elevate the craft, protect its interests, advance wages, reduce the hours of labor, spread correct economic doctrines and cultivate a spirit of fraternity among the working people, regardless of creed, color, nationality or politics.”