Workers World Party salutes the inspiring bravery of the Haitian People — in Del Rio, Texas, and in Haiti, now and for over two centuries.

The racist brutality of the United States is on worldwide display, with pictures of their border guards using whips — which the Border Patrol calls long reins — to stop Haitians trying to bring food and water back to their families in Del Rio. The Haitians duck and dodge but don’t drop their packages. 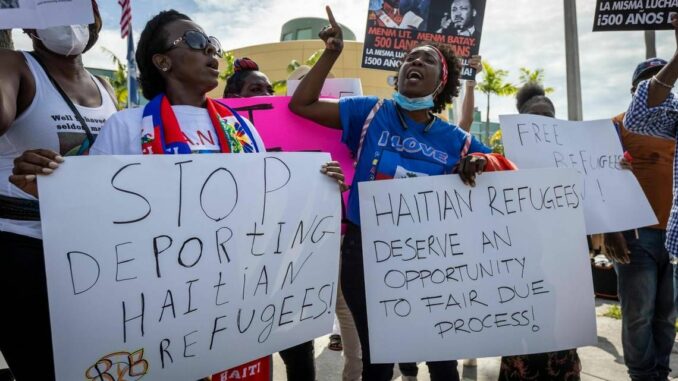 Lying to the refugees and saying that they were just moving them to a reception center with more facilities, the U.S. brought one planeload of people back to Port-au-Prince. Now these expulsions — illegal under international law — meet with more resistance. On at least one bus bringing refugees to the Del Rio airport, refugees managed to gain control of the bus and flee.

When the planes reach Port-au-Prince, people struggle to remain on the plane or to get back on it. Their belongings are thrown in a jumble on the tarmac, and often their passports and their children’s passports are not returned. To thwart their heroic resistance, Haitian people are put on the planes in shackles, returned in chains much like their ancestors were brought to Haiti.

Haitians are not leaving because of the current political instability. The people at Del Rio left Haiti long before the July 7 assassination of President Jovenel Moïse. Long before the regime of Michel Martelly (2011-2016), during the decades of Duvalierist terror, people were fleeing the economic and political devastation caused by the U.S.

The U.S. has been sabotaging Haitian development since Haiti committed its original “sin”— eradicating its enslavers through revolution — and emerged in 1804 as a free, Black country.

We demand immediate steps from President Joe Biden: Stop the deportations of Haitians and other asylum seekers, and stop the racist terror now!  Reparations for the Haitian people!