This article is an interview with Workers World contributor, archaeologist Paddy Colligan, from a series on the Arctic, from The Worker, Danish Workers Party publication, Sept. 6, 2021, translated by Workers World. 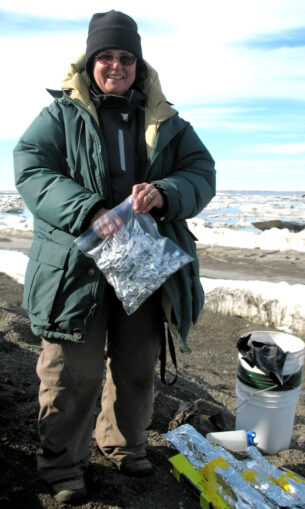 Paddy Colligan on the Chukchi Sea section of the Arctic Ocean on an early July day in 2008.

I say to Washington: “Hands off the area!” Any conflict over resources in the Arctic has a serious impact on the lives of the Indigenous peoples who live there. The antiwar movement should be aware of that and take into account the interests of Indigenous peoples, she told The Worker.

Paddy Eileen Colligan is a member of the communist Workers World Party in the U.S. and writes regularly for the party’s web journal workers.org. She has written about the Arctic, which is divided between Greenland, Norway, Sweden, Iceland, the U.S., Canada and Russia.

Dr. Colligan is an archaeologist specializing in the Arctic. She has conducted field research as well as research in several museums in Alaska, Canada, Greenland and Denmark.

Her research has included how people have lived for thousands of years in the North American Arctic. In 2008, she was part of a team of archaeologists and Inupiaq people who excavated a Thule cemetery, dating from 800-1400, on a rapidly eroding spit of land on the Arctic Ocean near Utqiaġvik, Alaska.

The field work was conducted under the protection of armed Inupiaq bear guards, who kept an eye out for the polar bears that occasionally approached the archaeological site where they were working. Besides working at this site, Dr. Colligan’s research has taken her to Nome and Fairbanks near the Arctic Circle, as well as small communities along the west coast of Greenland.

As the ice melts, the U.S. shifts focus

The archaeologist is highly critical of the U.S. government, which wants more control in the region where Russia and China are aiming to expand the Northern Sea Route as the ice melts. The climate crisis and the warming of the Arctic Ocean have suddenly made the Arctic valuable, not just strategically but as a source of raw materials, including energy resources, Paddy Colligan told The Worker.

She pointed out that while Canada and Russia control most of the Arctic’s territory, Norway and Greenland also have long borders with the Arctic Ocean. The U.S. has direct access only through its state of Alaska. U.S. strategists want to ensure they can compete successfully.

Aiming for that success, the U.S. Army has launched the “Reclaim U.S. Dominance in the Arctic” strategy, she said. Dr. Colligan adds that in the controversial report, the U.S. Army acknowledges that the excessive attention the U.S. has paid to waging desert war in recent decades has caused its efforts in the Arctic to pale.

“So now they are shifting focus and increasing military exercises in the region,” said Dr. Colligan, adding that as recently as last year she spoke with Army soldiers who were involved in training exercises in Alaska.

In the foreword to the report, Army Chief [of Staff General] James C. McConville says: “To protect our nation and keep the peace, the Army must train, equip and organize to win in the Arctic, which is an arena for competition — a line of attack rife with conflict — as well as an important area rich in natural resources — and thus it is a platform for global power projection.” McConville concludes, “The Army is committed to defending our Arctic interests,” and the goal is to “regain the Arctic dominance of the U.S. Army.”

Responsibilities of the peace movement

Dr. Colligan has little sympathy for this or for aggressive statements by U.S. President Joe Biden and NATO regarding the role of Russia and China in the Arctic.

Russia has the greatest access to the Arctic. U.S. strategists, on the other hand, plan to dominate in all areas. They already made this clear in a 1992 strategic document. If the Arctic becomes open to exploitation because the ice has melted, U.S. imperialism naturally wants to determine who gets the biggest share, she told The Worker.

Her research was funded in part by the American Scandinavian Foundation and the City University of New York Graduate Center, where she has also participated in a long-standing research collaboration in the North Atlantic with an interdisciplinary team of researchers from the U.S., Britain, Canada, Iceland, Greenland, Denmark, Norway and Scotland.

The Worker: Dr. Colligan, what can ordinary people do to stop the Arctic becoming a military battleground and being plundered by the great power of the U.S.?

Paddy Colligan: We should make the antiwar movement aware of the competition in the Arctic, so that we are not caught off guard if conflict breaks out there. But a conflict could also break out in Ukraine, Taiwan, Korea, Iran or in Africa. We need to demonstrate that NATO countries are and will remain exploitative predator nations and that they are all part of an imperialist alliance led by the U.S., whether in the Arctic or in Africa.

This is fourth in a series of articles on the Arctic, an area that has become a current focus for major powers, as the ice melts and rich raw material resources have appeared beneath the ice. Read all articles [in Danish] at arbejderen.dk/udland.