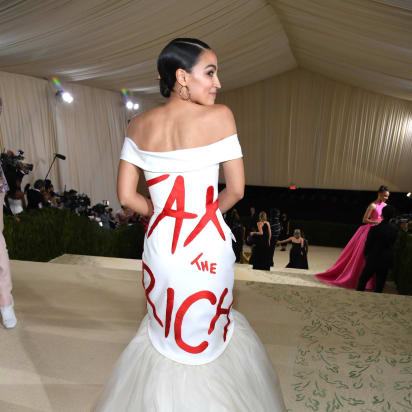 U.S. Representative Alexandria Ocasio-Cortez (D-N.Y.) was the center of a large social media debate when she appeared at this year’s Met Gala event wearing a dress with “Tax the Rich” boldly embroidered on the back. The fundraising event is attended by many wealthy individuals and celebrities.

Much of the debate placed Alexandria Ocasio-Cortez herself under the microscope, dissecting her personal motives and scrutinizing her background. Largely missing from the debate — the most important aspect — was the slogan itself: “Tax the Rich.” To examine this slogan, we need a systemic understanding of the exploitation working-class people face under capitalism.

Class nature of the problem

Wealth inequality is one of the most obvious contradictions of the capitalist system. Beyond the amount of wealth people have, there is the even deeper contradiction that allows the huge income gap between the rich and the poor to exist in the first place.

Out of all the contradictions within capitalism, the primary contradiction shaping our experience is that contradiction of property ownership — between those who own and those who do not. The capitalist class owns the means of production — the property central to wealth creation. They therefore claim the “right” to all the products the workers they employ produce. The rest of us, the working class, own nothing that we can use to produce but our own labor power.

Some workers may own a house or even a car. However we do not own the land, tools, factories and other means to create our own products, and we are forced to work for those who do, for a rate much less than the amount of value we actually produce. The capitalist class keeps all the wealth accumulated for themselves, reinvesting some back into the production cycle. They kick down scraps for the workers, just enough for us to survive and return to work day-after-day.

Workers produce all the wealth in society only to have it expropriated by the bosses. This is barefaced exploitation, yet without it capitalism could not exist.

The phrase “Tax the Rich” is a relatively progressive slogan, especially to raise in the midst of those wealthy event-goers who paid roughly $30,000 per Met Gala ticket. The slogan highlights the corrupt nature of the capitalist system, under which the rich pay a disproportionately small amount of taxes (if any at all) compared to working-class people. But it stops there and falls short of explaining the true root of the problem.

It does not raise questions about the existence of private property itself, nor the fact that working-class and oppressed people have neither any ownership or control over any of the wealth they produce in society, nor little ability to exercise any control over their workplace.

Private property relations are not changed when the tax rate on the rich is raised. When higher taxes on the rich have been implemented, the slogan reveals itself as insufficient, because simply raising the rate of taxation on the rich does nothing to address this power dynamic between the ruling capitalist class and the exploited working class, who are deprived of the ownership of the means of production. When made to pay higher taxes, the capitalists can pass on the expense by lowering workers’ wages or raising consumer prices.

The only way for workers and oppressed people to change our relationship to the means of production, to empower ourselves in a meaningful way — is to organize for socialist revolution and overturn private property relations.

If we are to demand the rich pay their “fair share,” that means taking back their wealth and private property and returning it to the workers who collectively produced it.