Throughout 2021 Argentinians have been in the streets, opposing everything from unemployment to fracking to the Zionist occupation of Palestine. A Sept. 4 march, in memory of those lost to COVID, protested the government’s policies related to the pandemic. 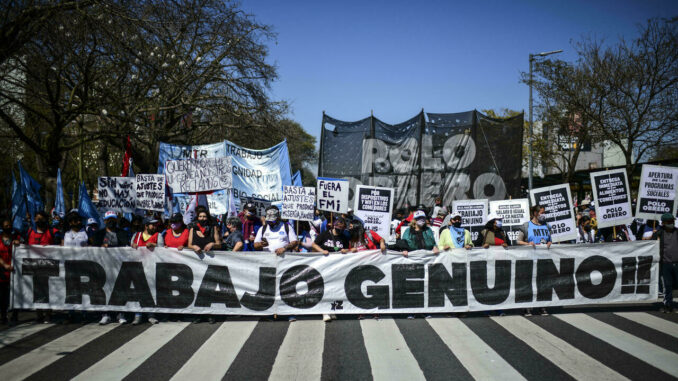 Right-wing Brazilian President Bolsonaro — in Trump-like fashion — has wildly exaggerated his popularity. He predicted as many as 2 million people would turn out to demonstrate support for him on Brazilian Independence Day Sept. 7. He even called on his backers to attack the Supreme Federal Court and the Chinese Embassy.

There were nowhere near 2 million Bolsonaristas in the streets Sept 7. On the contrary, “Cry of the Excluded” was the theme of anti-Bolsonaro demonstrations held in 64 cities. “There is no sign of recovery from unemployment of more than 14% of the country, to which is added a much larger number of people living on the edge in precarious situations,” Resumen Latinoamericano reported Sept. 9. “The social crisis only tends to worsen all the social indicators.”

In Ecuador, demonstrations Sept. 15 continued the ongoing protests against President Guillermo Lasso. Demands included calls for a freeze on fuel prices and an end to privatization. The Unitary Workers Front, the Confederation of Indigenous Nationalities of Ecuador and the National Union of Educators were among the organizations protesting. The demonstration drew rice growers, milk producers, banana workers and taxi drivers.

That same day Salvadorans demonstrated against President Nayib Bukele’s legal maneuvers that would let him seek another term in the 2024 election — moves protesters say represent a consolidation of dictatorial powers. The action, uniting unions, students, Indigenous groups and members of the LGBT+ community, opposed Bukele’s decision to make the cryptocurrency bitcoin the national currency along with the U.S. dollar.

A number of bitcoin ATMs have recently been vandalized or destroyed. Bitcoin, a mandatory currency for transactions between businesses with the technical capacity for it, is a magnet for capitalist speculators and gamblers due to its wild and rapid fluctuations in value.

A third Sept. 15 action was a general strike of Uruguayan workers called by the Inter-Union Plenary of Workers-National Convention of Workers (PIT-CNT). Issues included education, housing, food and land distribution to small farmers. The PIT-CNT invited a cross section of Uruguay’s population to converge on the capital Montevideo. 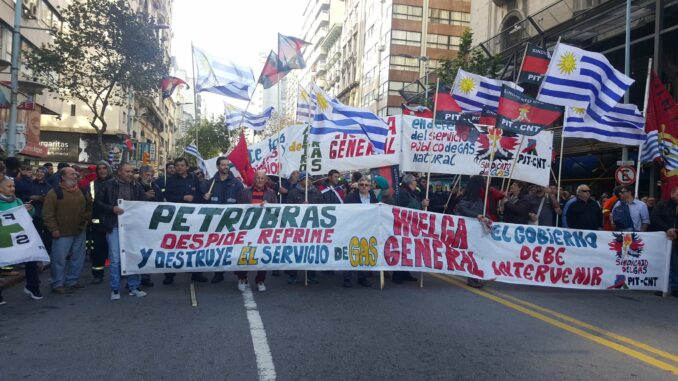 “The PIT-CNT and the entire popular camp are trying to raise their level of initiative and mobilization. The radical adjustment policy being applied by the government against the population’s rights and income will bring more protests,” stated PIT-CNT Secretary-General Marcelo Abdala. (TeleSUR English, Sept. 15)

The people’s movement in Honduras celebrated a victory the evening of Sept. 17, after learning that charges were dropped against Edwin Espinal and Raul Alvarez who had faced 15-30 years in prison. They were arrested along with180 others over bogus charges stemming from 2017 protests against massive electoral fraud that gave right-wing President Juan Orlando Hernandez another term in office. Espinal and Alvarez had been jailed for 19 months under horrific conditions.

Other events this month included the commemorations of 200 years of Mexican independence Sept. 16 and the bloody CIA coup 48 years ago that overthrew socialist Chilean President Salvador Allende Sept. 11.

Each of these countries’ struggles are nails in the coffins of the Monroe Doctrine and President Theodore Roosevelt’s “Big Stick” policy in Latin America, whereby the U.S. ruling class claimed the whole Western Hemisphere for itself. To quote a popular Chilean song: “The people united will never be defeated.”