The author is a member of the Workers Voice Socialist Movement of New Orleans. Here she describes the ravages of Ida, the failure of government aid and her ideas on how working class organizations should react to the crisis. 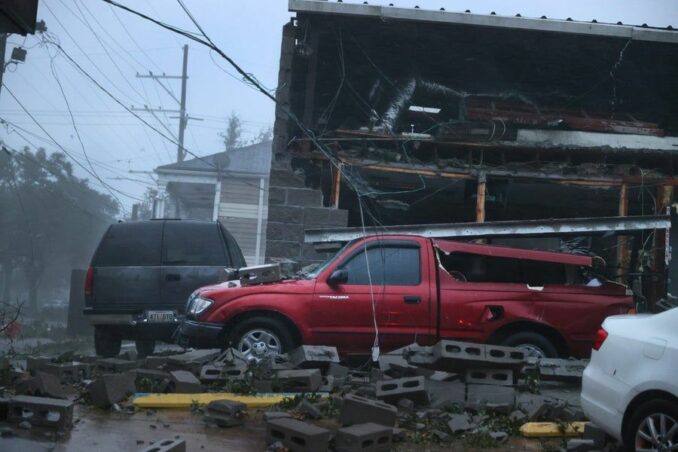 Sept. 12 — Sitting in my “living room,” piled with belongings from other rooms where water came in from a damaged roof, I fume at news coverage of all the help we’re allegedly getting. But reality on the ground for workers, especially the low paid, is completely different. Despite hundreds of millions of dollars for Ida recovery, little goes to those who need it now. Most recovery money goes to institutions, not the people directly. And more storms are coming fast.

The $500 FEMA cash is delayed, if ever coming. As if $500 is anywhere enough. So many do not have bank accounts. Hours are spent on the phone waiting for FEMA, only to be denied. You’re denied if you stayed in a non-designated major hotel. Denied if you have insurance. FEMA is done online, and at least a third of New Orleans has no access to the internet. And Sept. 19 is now the deadline for filing.

Whole towns in the bayou parishes, Terrebonne and Jefferson especially, have been declared uninhabitable. Indigenous nations in these parishes are devastated too. Workers have no jobs, no money, no homes; 13,000 are dead from COVID; testing is hard to find, but hey the Saints are playing.

Insurance is all about collecting money from us, not paying it to us. If you even have insurance, there is often a hurricane deductible of thousands of dollars. Louisiana is an economic rock bottom for workers, yet has the highest home and car insurance costs in the U.S. Who has thousands to deal with emergencies — only well-to-do people.

Licensed contractors can’t be found; and if you do, they rip you off and double their prices. But urgent repairs like leaks, sheetrock needing to be torn down or whole house demolition cannot wait months to get some amount that insurance decides from their thrones, even if their adjusters report damage accurately.

What is needed right now is money

Money is needed now to get repairs done, to live somewhere else, to get a car, a job or pay your rent. Bills are coming in to the mailbox, and Entergy is asking for a 38% rate hike. The working class, especially communities of color and lower-paid white workers, is being ground down. We are joining the global ranks of climate-change refugees.

This disaster has revealed its workers who are important. Bankers, real estate developers are unnecessary. Sanitation, electrical, sewage and water, hospital and retail workers are who really keep us going. Trash is piling up in mountains throughout the city, but sanitation workers need triple the wages, and the city needs to hire hundreds more.

The city announced construction projects are starting again, so they can continue their relentless gentrification, making New Orleans look like Johannesburg under Apartheid. The white capitalist ruling class is the hidden hand of all this, authorized by the upper middle-class Black politicians with the support of legions of nonprofits.

Militarism and war profiteering not a policy; it is capitalism. Since Sept. 11, 2001, $21 trillion has been looted from the treasury for wars that workers have no interest in. The money goes for profits to the military industries, who hold sway over the politics of the White House and Congress, Republican and Democrat. This is an amount that is so large, it could cover all our needs here and globally.

We cannot continue to fight small fights, each issue separated while the ultraright gains strength. We need to unite the left and bring issues together in a massive movement directed to involve the workers. Working together, we can take the hard but necessary road for a mass militant movement that unites the needs of the people with anti-militarism.

We don’t need endless webinars with great facts; we need to go to the workers. Simply and selflessly.

It is the power of a movement united that can inspire and stimulate the broad working-class masses that is the urgency. Capitalism must go, but we must look inward first to our own forces, to reorient, organize with class consciousness and simply, and have political transitional demands, and not rely on politicians like Biden.

Capitalism is at the root of all misery and needs to be uprooted completely. Only the working class, with all its nationalities, can accomplish that, end imperialist wars and deal decisively with saving the planet, the people and all species.