The fourth annual Running Down the Walls (RDTW) event took place at FDR Park in south Philadelphia Sept. 12, starting with a yoga warm-up followed by a revolutionary 5K walk/run. The day of solidarity amplified the voices of comrades behind bars, lifting them up in their struggles and maintaining material support. Over 200 people participated. 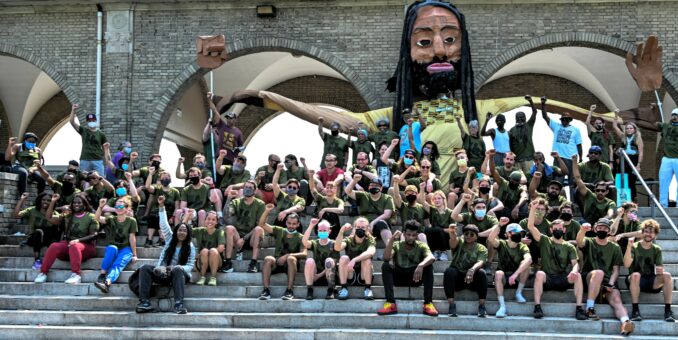 This year’s event honored political prisoner and long-term Black liberation activist Mumia Abu-Jamal. This year marks the 40th year that Mumia has been behind bars as a voice for the voiceless. Due to multiple health issues from medical neglect, he needs our support now more than ever. We freed the MOVE 9 after 40 years — let’s do the same for Mumia! A mammoth puppet of Mumia was on hand for the event.

Participants and speakers at the event included many former political prisoners and exonerated juvenile incarcerates. Former Black Panther Albert Woodfox, freed after 43 plus years, mostly in solitary confinement at Angola, Louisiana’s notorious state penitentiary, was on hand for the event.

Many speakers called out the historic 50th anniversary of the Attica prison uprising and urged participants to make 2021 the year to free all political prisoners. RDTW events have been held across the U.S. since 1999 to raise funds for numerous political prisoners. Each year, incarcerated comrades participate by running inside prison walls.