Several hundred workers at auto parts supplier ZF struck the company in Marysville, Mich., Sept. 9. They are demanding union recognition and charging ZF with reneging on a “neutrality agreement.” Management had previously agreed to recognize the United Auto Workers if a majority of workers in the plant signed union authorization cards. 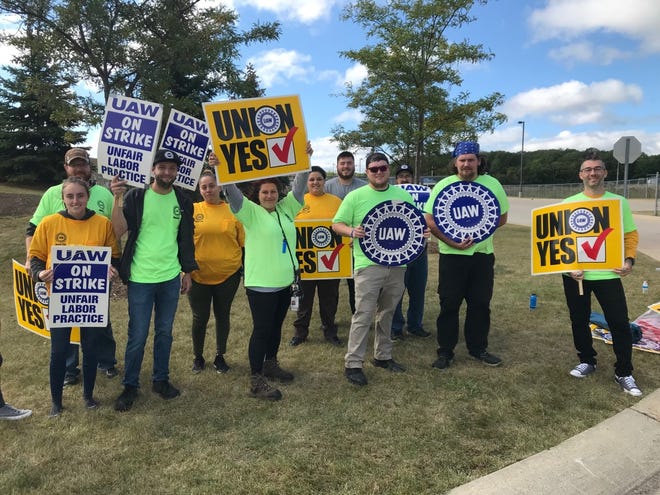 The Marysville plant makes axles for Stellantis, which was formed earlier this year by the merger of French auto company PSA and Fiat Chrysler Automobiles. It was jointly operated by ZF and FCA, but under the 2019 contract with the UAW and FCA, FCA workers are transferring to other FCA plants while they are gradually replaced by new hires employed by ZF. The pay scale is lower for these nonunion ZF workers than for FCA workers, who themselves are making less in the axle plant than in other FCA facilities.

The plant was opened to replace Chrysler’s Detroit Axle plant, closed as part of the 2009 bankruptcy and federal government bailout deal. The new plant, with state of the art technology, produces more axles with fewer workers.

From the closing of Detroit Axle to the 2015 contract that created a separate pay tier at Marysville, to the latest agreement turning the plant over to ZF, the UAW leadership sold these concessions to the membership as necessary to keep FCA profitable and competitive.

But ZF management, following the examples of Nissan and Volkswagen bosses at their U.S. plants, aims to keep the union out! The striking workers understand that even a weak union is far better than no union at all, even as they watch their Stellantis co-workers walk past their picket line to go to work — because, the UAW leadership explains, the Stellantis contract has a “no-strike clause.”

Will the UAW strike John Deere?

UAW members in nine locals at John Deere agricultural equipment plants in Illinois, Iowa and Kansas voted Sept. 12 to authorize a strike. Taking a strike vote is often a routine process during contract negotiations; while a yes vote gives a union leverage at the bargaining table, in most cases no strike takes place.

But this time around, the workers have been vocal about being ready to hit Deere with a strike. They are tired of stagnant wages, tiered pay scales — where newer workers make less than those with higher seniority — and frequent layoffs. The last six-year contract in 2015 was nearly voted down, and it failed at two out of nine plants because the small pay raise was eaten up by higher health insurance costs.

In addition, grievances are piling up over the company’s refusal to pay a contractual bonus for making production quotas — even though workers are not supposed to be penalized for situations outside their control, such as frequent parts shortages because COVID disrupted suppliers’ production.

Workers believe they are in a strong position to wield the strike weapon, as the company is having a hard time finding workers to fill open positions. This is not so much due to a “labor shortage” per se as to a shortage of workers willing to take a physically demanding job that starts at $15.14 an hour and where there is no job security.

In 1981, then-President Ronald Reagan broke the Professional Air Traffic Controllers Organization, ushering in an era of widespread contract concessions and union busting that has lasted four decades. For UAW members this pattern of givebacks began even earlier with demands made on the union during the 1979 federal government bailout of Chrysler.

Concessions have not saved jobs; the UAW membership has fallen precipitously since 1979. Instead concessions have made companies richer. The only way to reverse this trend is through class struggle.