Prison abolitionists from all across the country came together in the New York cities of Attica and Buffalo on Sept. 9 to commemorate the 50th anniversary of the uprising at Attica prison, where prisoners stood up in 1971 to demand political rights and better conditions for living and working. The Attica Uprising ended with many prisoners and even guards being slaughtered by the state, under orders of then-Gov. Nelson Rockefeller.

These recent events paid respects to those who had been killed and the families who survive them. They amplified the calls for the abolition of prisons, police and ICE. Both events were in solidarity with the organization Jailhouse Lawyers Speak, a collective of radical incarcerated activists who made a call to action for nationwide prison abolition demonstrations on Aug. 21 and Sept. 9.

The first event was a demonstration outside Attica prison. About 30 people gathered to read the original demands made by the Attica prisoners 50 years ago. They used a loudspeaker for those inside the facility to hear. After the demands were read, demonstrators took turns reading the names of those who had been killed. Demonstrators held a banner reading: “Attica is all of us! Abolish ICE and prisons!”

An event later in the evening took place at MLK Park, on the east side of Buffalo. Attended by about 75 people, it featured speakers from many organizations across the country, other longtime activists and family members of those who had been involved in the Attica Uprising. 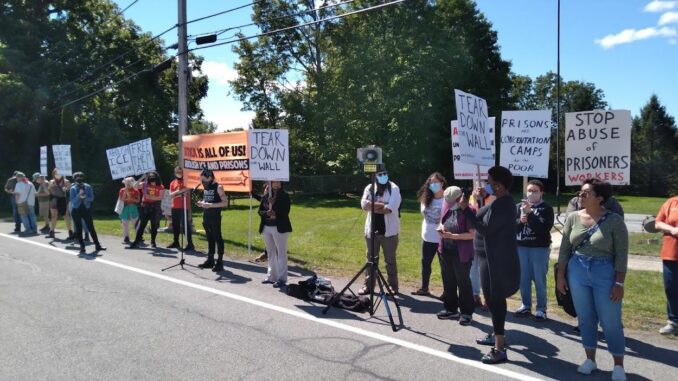 Demonstrators outside Attica prison hold banner reading “Attica is all of us! Abolish ICE and prisons!” (Photo: Lydian Standeford)

Speakers included: Lion Blyden, son of Herbert Blyden, chief negotiator for the Attica prisoners during the uprising; Good Leaf, brother of Dacajeweiah/John Hill, a leader in the Attica Uprising and member of the American Indian Movement; Ramadan Abdullah, former Black Panther and former resident chaplain in Attica prison; BaBa Eng, restorative justice advocate and director of programs for Prisoners Are People Too.

Also Chuck Culhane, former death-row prisoner and member of the Western New York Peace Center; Solomon Brown, activist and organizer with Buffalo Democratic Socialists of America; Chrissy Stonebraker- Martínez, co-coordinator of InterReligious Task Force on Central America and Colombia; Marsha Goldberg, member of the Prisoners Solidarity Committee of Workers World Party, who had been outside Attica demonstrating support during the uprising; Mirinda Crisssman of the PSC, and and many others.

Out of the variety of speakers and organizations present, the message that ran through every speech was the need for working-class and oppressed people to unite and organize against the prison-industrial complex.

It is clear that the issues which plagued Attica prison will continue to persist in every prison and jail across the U.S., as long as capitalism continues to exist. With prisoners making up a fundamental part of the working class, it is crucial that the movement for prison abolition and the newly revived labor movement merge.

Workers World Party today still echoes our calls made at Attica 50 years ago: “Prisons are concentration camps for the poor! Free them ALL!”