Mexico’s Supreme Court voted unanimously 10-0 to decriminalize abortion on Sept. 7, a major victory for women and others who have the ability to become pregnant. The 11th judge was absent during the vote. Abortions have been legal in Mexico City since 2007. 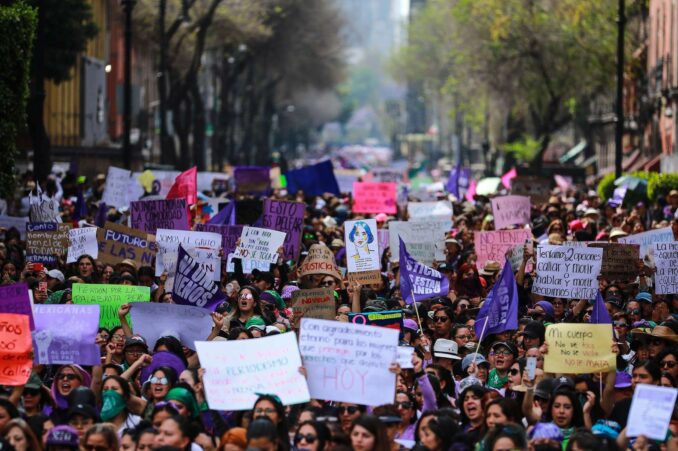 The 10 judges made the decision when they ruled a law unconstitutional in Mexico’s northern Coahuila state that imposed up to three years of prison time for women who underwent illegal abortions and the people who aided them. It is estimated that hundreds of Mexican women have faced false criminal charges of homicide for the “crime” of seeking an abortion from 2007 to 2016.

Paula Avila-Guillen, executive director of the New York-based Women’s Equality Center, states, “Abortion has been effectively decriminalized in Mexico. And every woman currently imprisoned in the country for abortion can use this precedent to be freed.” (Washington Post, Sept. 7)

This overturned law is very similar to the Texas anti-abortion law, which the U.S. Supreme Court upheld, that criminalizes anyone who gets an abortion beyond the first six-week term of pregnancy. The law lets anyone sue for a “bounty” of $10,000 against those who “aid and abet” pregnant people to get an abortion after that time period, although not the pregnant person, who would not face a lawsuit or a financial penalty.

These reactionary laws are likened to the Fugitive Slave Act of 1850 that placed bounties on enslaved Black people, who dared to escape north to freedom, and on the abolitionists who helped them.

While the Sept. 7 ruling does not automatically legalize abortions throughout Mexico, it does lay the legal basis for those who have been imprisoned for either having abortions or aiding others in getting the procedures to be released in all 32 federal entities that make up Mexico.

Only Oaxaca, Hidalgo and Veracruz have taken Mexico City’s lead for the past two years in decriminilizing abortions. Medical services for abortions in those three states have been limited due to the religious influence of the Catholic Church.

Mexico may very soon join Argentina, Cuba, Guyana and Uruguay as the fifth country in Latin America and the Caribbean to legalize abortion. This will be a historic development, since Mexico has the second largest population of Catholic followers in the region after Brazil.

Melissa Ayala, speaking on behalf of the Mexican feminist organization GIRE, commented on the ruling, “This will not only have an impact in Mexico; it will set the agenda for the entire Latin American region.” (Washington Post, Sept. 7)

The ruling which decriminalizes abortion is rooted in the growing women’s movement throughout Mexico, which also leads the struggle against gender-based violence. An average of 10 women a day are murdered in Mexico; 2,000 women were murdered during the first seven months of this year.

On March 8, 2020, International Working Women’s Day, the country’s National Palace in Mexico City was stormed by tens of thousands of people, the majority of them women. They were armed with bats, blowtorches and hammers, demanding the government end gender-based violence, known as femicide. Thousands of women followed up on that demand the following day, by carrying out a one-day national strike.

The right to have an abortion and the right to live free from male-dominated violence are very much tied to women’s and other peoples’ right to control their own bodies.

While the Mexico ruling is a big step forward in making abortions legal, the Texas abortion law is one big step backwards and an effort to overturn the Roe v. Wade decision that legalized abortions for women in 1973.

Activists in Texas, which is stolen Mexico, will no doubt take part in the Oct. 2 demonstrations, which will be organized in every U.S. state and Washington, D.C., to demand abortion access for all. The victory in Mexico will no doubt be a big inspiration!