Workers of the Sisotrokraft Union at the Mondelez factory in the city of Barquisimeto in Venezuela sent a solidarity message Aug. 28 to striking Nabisco workers in the U.S. Both the U.S. and the Venezuelan workers are employed by Mondelez International, Inc. 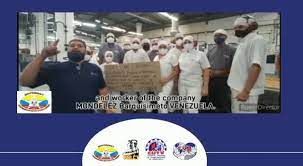 Venezuelan workers employed by the same multinational company sent a message of solidarity to U.S. Nabisco workers on strike, Aug. 28.

Usually referred to as Mondelēz, the U.S. multinational confectionery, food, beverage and snack food company, based in Chicago, has an annual revenue of about $26 billion and operates in 160 countries.

The message was delivered by Victor Gutierrez, president of the Sisotrokraft Union, from the factory floor. A large group of white-jacketed, COVID-masked workers stood with him — some working in the background on an active assembly line — and others held a sign with a solidarity motto: “Fight and Victory!”

Gutierrez emphatically affirmed: “From here, together with the workers, we stand in solidarity with the workers at the Mondelēz company in the United States, in the cities of Oregon, Illinois, Virginia, Colorado, and Atlanta, where they started a strike for 20 days to demand their rights and labor benefits that this employer has taken away from them. This employer’s association has a worldwide policy of reducing jobs and reducing the benefits and labor rights of the working class. So the call is to unite our struggle to achieve our goals.”