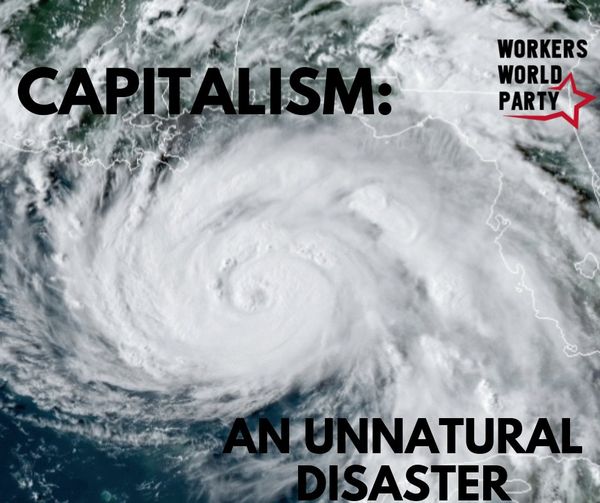 As Hurricane Ida slams into Louisiana and assaults the entire Central Gulf Coast, we must remember that when disasters occur, capitalism does not respond with aid but instead accelerates misery.

Today, along with Ida’s landfall in southern Louisiana, is the 16th anniversary of the devastating Hurricane Katrina, which similarly hit southern Louisiana and killed 1,800 people, with damages totaling over $1 billion. The city of New Orleans is still not fully rebuilt from that catastrophe. FEMA and the Red Cross heavily mismanaged all “aid” that they provided, and many were left to die, with even more left to fend for themselves. Additionally, police and the National Guard, arms of the capitalist state, were sent into the city to terrorize the residents who were trying to survive during and after the hurricane.

In a similar fashion, the city of New Orleans neglected to issue a mandatory evacuation, citing that “they didn’t have enough time.” Now with floods, tornadoes and nonstop lightning battering the Gulf Coast, it is obvious that working-class people, especially Black and Brown working-class people, are once again left to fend for themselves.

In socialist Cuba, there is an entire rapid response program for hurricanes, regardless of category, that ensures a minimal amount of damage for the 11 million people on the island.

In the U.S., the government and billionaires have no issue sacrificing thousands of working and oppressed persons and would sooner do that than invest in our survival against climate change, another major, critical result of capitalism-imperialism’s plundering of the planet.

It is critical that we educate the masses of the dangers of climate change and why climate change is occurring; we must organize and mobilize the masses, the workers and oppressed persons, against the destruction of our planet, which is treated as being disposable by billionaires all over the world. We must mobilize and organize to demand a rapid response program for the Gulf Coast, as hurricanes continue to happen and intensify year by year, with the lives of millions of workers and oppressed persons being impacted more and more.