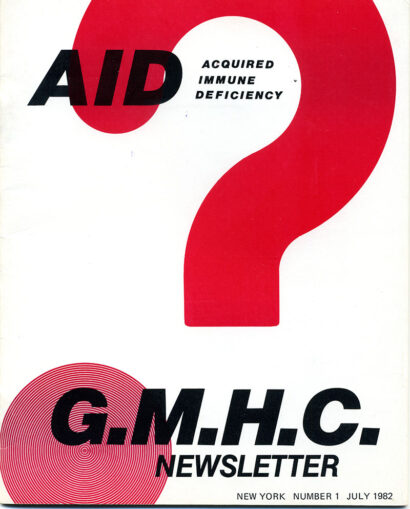 On July 3, 1981, the New York Times published an article with an ominous headline, “Rare cancer seen in 41 homosexuals.” Buried on page 20, the story noted two simultaneous and similar outbreaks of a cancer, Kaposi’s sarcoma, among homosexual men in New York City and San Francisco, with some of the cases dating back 30 months to January 1979. A doctor quoted in the article describes the outbreak as “rather devastating.” (nyti.ms/2UgfINQ)

“Rather devastating” was an understatement as to what was to come. People infected with HIV who develop AIDS frequently contract Kaposi’s sarcoma. By 1987, just six years after that headline, at least 5 million people worldwide were living with HIV/AIDS, at least 45,000 in the U.S. (bit.ly/3rK8IF8) There had been at least 40,000 deaths. (bit.ly/3xaaL6l)

The year 1987 would prove to be a watershed moment in HIV/AIDS history. ACT UP (AIDS Coalition to Unleash Power) was founded in New York City in 1987 and began a string of direct actions to force the U.S. government to not only acknowledge the plague, but to begin to take steps to treat people and find a cure. President Ronald Reagan had refused to comment publicly on HIV/AIDS, until the resistance of masses of people forced him to speak that year.

Today it can be a common view that ACT UP was the first group in the U.S. organized to deal with the HIV/AIDS crisis. While ACT UP did coordinate and execute fabulous direct actions against bourgeois scientists, government officials and those who claimed AIDS was God’s punishment for being gay, fightback and resistance to the epidemic began almost immediately in 1981 when the disease appeared.

In August 1981, The Sentinel, a LGBTQ+ newspaper serving San Francisco, reported: “Just a few weeks ago, the government dropped millions of dollars into research to determine the cause of Legionnaires’ disease, which affected relatively few people. No such outpouring of funds has yet been forthcoming to research the how’s and why’s of KS [Kaposi’s sarcoma], a rapidly fatal form of cancer that has claimed far more victims in a very short time than did Legionnaires’ disease.”

(Randy Shiltz, “And the Band Played On: Politics, People and the AIDS Epidemic,” p. 90)

The Sentinel’s comment foretold the grim future to come for those suffering from HIV/AIDS, as lack of response from the U.S. government allowed thousands and thousands to die.

On the other side of the country in August 1981, future ACT UP founder Larry Kramer held a meeting at his New York City apartment with at least 75 gay men. They listened to Dr. Alvin Friedman-Kien report that virtually nothing was known about the new disease, but that he needed money to research it. This led to what was perhaps the first-ever fundraiser for HIV/AIDS research and the foundation of Gay Men’s Health Crisis. Over Labor Day weekend on the legendary gay beach Fire Island, Kramer’s group raised $6,635 — equivalent to $19,530 in 2021.  (Randy Shilts, “And the Band Played On,”)

National Institutes of Health did harm during an epidemic

At the time, the U.S. had advanced medical and health equipment and technology, which was primarily in the hands of capitalist profiteers, but this expertise was not put to use to stop the epidemic.

On Sept. 15, 1981, the National Institutes of Health’s department, the National Cancer Institute, held a conference on Kaposi’s sarcoma and opportunistic infections. These diseases, such as Pneumocystis Carinii Pneumonia (PCP) are usually only seen in people with weakened immune systems, typically due to cancer treatments.

Clinicians, many of whom had been treating patients with KS, traveled from all over the country to Maryland to attend this conference, hoping it would serve as a springboard to research and contain this mysterious disease.

The clinicians attending this conference likely expected the NIH/NCI to flex its muscle. At this time, its annual budget was $1 billion. Because of inflation, this figure would be significantly increased today–between 2 and 3 times higher in 2021 dollars. (Randy Shilts, “And the Band Played On”)

Instead, what attendees got was a lackluster, apathetic presentation on KS in Africa, where the disease was also spreading rapidly. They were told that the disease should simply be treated with radiation or aggressive chemotherapy.

Names for the “mysterious gay cancer” changed over years of diagnosis, treatment and struggle — with most terms inciting not only more anti-gay discimination but anti-Black, anti-disabled and anti-addict discrimination as well. Though designated as HIV/AIDS today, in 1982 the disease was called “GRID” or “Gay-Related Immune Deficiency,” inciting even more discrimination against the LGBTQ+ community. (nyti.ms/37vNYrg)

This label fueled the right-wing camp that had spent years platforming against LGBTQ+ issues, under the guise of “saving children” and “keeping American values.” Although GRID only stuck for roughly four months, its stigma has carried on.

Just as odious was the lesser-known but still-used term, also coined by the CDC: the “4H Disease.” This bigoted name was invented when it was erroneously believed that only four groups of people were at serious risk of infection: Haitians, heroin users, homosexuals and hemophiliacs.

After the origin of HIV/AIDS in the colonized Belgian Congo in the 1920s, Haiti is regarded as the first nation outside of Africa to see an HIV/AIDS epidemic, generally dated from 1966. Paul Farmer, in “AIDS and Accusation: Haiti and the Geography of Blame,” notes that  HIV/AIDS came to Haiti through North American tourists. (“A Marxist history of HIV/AIDS – Part 2: The origins of HIV/AIDS,” Workers World,  July 9, 2021)

Heroin users and hemophiliacs were looped into the blame because of the higher rates of infection among users and those stricken with hemophilia, due to needle-sharing and blood transfusions.

And then there were “the homosexuals” — who were blamed from the start.

As early as June 1982, it was known that heterosexual people, cisgender women and other “low-risk groups” could and did contract HIV/AIDS. Another group initially considered “low-risk” was infants and children; in the early months of  1982, it was believed by medical professionals that HIV/AIDS could not spread to infants or children.

However, in a July 2021 interview conducted by this writer, Workers World Party Philadelphia member Marie Kelly, a retired pediatric nurse, spoke of working in a Philadelphia hospital in a predominantly Black, working-class part of town in the early 1980s and treating children who were dying from AIDS, as a result of either being born with it or contracting HIV through blood transfusions to fight their hemophilia. People who had injected drugs who were pregnant and given birth had unknowingly contracted HIV that way.

In December 1982 the CDC finally published reports of AIDS in babies and children. (tinyurl.com/24yp8atf)

Despite this, even with knowledge from medical professionals in hospitals and even top scientists themselves, the focus on HIV/AIDS centered around LGBTQ+ people as the cause and thus allowed anti-LGBTQ+ discrimination and prejudice to intensify.Though ‘GRID’ was officially renamed ‘AIDS’ in September 1982, the damage had been done.

Ellen Catalinotto, who contributed to this article, worked for nearly 30 years as a midwife in New York City hospitals, where she participated in research that led to the first breakthrough in preventing mother-to-child transmission of the AIDS virus.  Devin Cole is the president of Strive (Socialist Trans Initiative), a transgender advocacy organization in northwest Florida, and a member of the Workers World Party – Central Gulf Coast (Alabama, Florida and Mississippi) branch.

‘A Marxist History of HIV/AIDS,” Parts 1 and 2, are available on workers.org.

Next: ‘Fighting for our lives’ against AIDS in San Francisco.