The bloody final week of the U.S. occupation of Afghanistan is replaying Washington’s crimes of the past 20 years. A war whose pretext was combating “terror” is ending, amid terror that U.S. mass murders have generated.

Blame for the carnage, during the last 20 years, was first covered by lies. In the accelerated timeline of the impending U.S. departure, some truth was exposed.

A suicide attack at the Kabul Airport left nearly 200 dead, including 150 Afghan civilians, 30 Taliban and 13 U.S. troops. In the midst of mourning for the victims — and wondering how one 25-pound explosive produced so many victims — we learned that many of them were killed by U.S. troops firing automatic rifles.

Joe Biden, in Rambo mode, promised quick revenge for the bomb attack. The U.S. military soon declared that one drone strike had killed leaders of the ISIS-K group, which had taken responsibility for the bombing. Another drone strike blew up a car, showing how the Pentagon “pinpoints” terror targets. 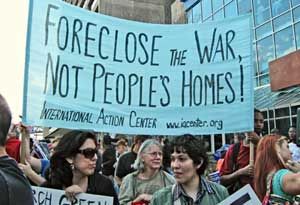 In 2009, people all over the world marched against the continued U.S. war on Afghanistan and Iraq, here in Atlanta. WW Photo: Monica Moorehead

Then we learned that the real victims of the drone strikes were Afghan civilians, including seven children. Under five years old.

This is exactly how U.S. imperialism waged a war against the Afghan people for 20 years: Every drone and rocket attack, every night raid into Afghan homes, produced civilian victims. It created enemies, who, having limited choice, decided that even the Taliban was preferable to the Yanks.

As the Aug. 31 deadline for U.S. withdrawal approached, last week’s lies were exposed quickly. They are but the latest lies of U.S. aggression and occupation built on lies. And not only from the Biden administration, which has the unenviable task of closing shop.

Republican and Democratic Party politicians and Pentagon officials lied consistently during the 20-year occupation, and they lied last week. They lied to cover up the pillage, waste and corruption they all took part in — along with the armaments industry and military contractors. And they lied to cover up Washington’s motives for seizing Afghanistan.

They are all responsible for the 20 years of horror inflicted on the Afghan people. They have shattered Afghan society and aroused such fury against U.S. crimes that some Afghans are willing to strap suicide bombs to themselves if the explosions kill U.S. troops or their collaborators.

This is neither a Republican war nor a Democratic war. It is a criminal war that both big capitalist parties own. George W. Bush ordered the invasion. Barack Obama expanded the U.S. military troop deployment and the drone war. Donald Trump dropped a nonnuclear superbomb on Afghanistan.

Biden’s handling of the exit grows out of U.S. military strategy during the 20-year occupation. The crime of the Afghan war is not that one or another of the U.S. presidents was incompetent or a fool — that would be a minor crime compared to what was committed against the Afghan people.

The crime of each successive administration is that they represent the military, economic and diplomatic domination of world imperialism — with the U.S. its center — and they inflict, expand and defend the exploitation of workers and toiling people around the world, for the profits of a handful of billionaires and bankers. There is no way they can do that except through crimes and lies.

The task of anti-imperialist forces in the United States is to expose the lies and prevent the U.S. from bringing more harm to the Afghan people.

No more war, no more occupation, no more sanctions!