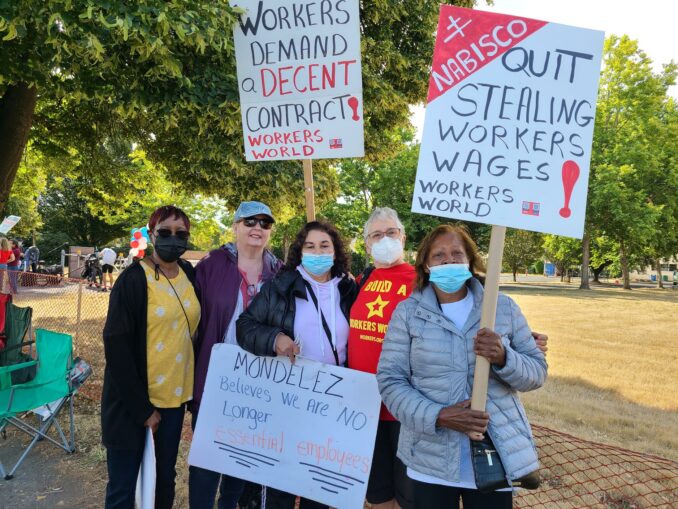 Nearly all of the entire multinational workforce of over 200 at Portland’s Nabisco factory went on strike Aug. 10, shutting down the bakery lines. They have been without a decent contract for five years and are fighting to keep the benefits they have earned.

Portland’s striking workers, represented by Bakery, Confectionery, Tobacco Workers and Grain Millers (BCTGM) Local 364, have the backing of workers in four other unions at the plant, who are honoring the picket lines. They are getting tremendous support from the community, organizations, unions and other striking workers in Portland. Rallies were held in front of the plant Aug. 14 and 21.

Nabisco’s parent company, Mondelēz International, is trying to take away workers’ pensions, increase their health care deductible to $4,000, stop paying time and a half for weekend work and outsource workers’ jobs. Workers say these cutbacks would cost them tens of thousands of dollars a year in wages.

For over a year during the pandemic snack boom, Nabisco employees continued to work as “essential workers.” They often worked 12- to 16-hour shifts, sometimes up to 60 or 70 days straight.

Profits the workers generated for Mondelēz in 2020 nearly doubled from the first to the second quarter of 2021. (marketwatch.com) Mondelēz has seen its growth rate steadily climb since the first quarter of 2020, and it made $26.6 billion in revenue in 2020. (statista.com)

Over 2,000 workers across the country have joined Portland in striking Mondelēz. The sales distribution center in Aurora, Colo., went out Aug. 12. Baking stopped in Nabisco factories in Richmond, Va., where 400 workers went out Aug. 16, and in Chicago Aug. 20.

Frito-Lay workers from Kansas, who recently ended their strike, sent pizza to the picket lines. Workers from Portland’s iconic Voodoo Donuts, currently on strike, sent boxes of donuts. (More on those strikes at workers.org)

With the Richmond workers on strike, a message of Southern worker solidarity came from Alabama. Haeden Wright, president of United Mine Worker Auxiliary Locals 2368 and 2245, tweeted Aug. 21: “Every U.S. #Nabisco bakery is now #onstrike! Sending love and #solidarity to each location as they strike together to demand fair compensation and working conditions. The Auxiliary at #WarriorMet stands with you!” For five months, the striking Alabama coal miners have walked the picket line against Warrior Met Coal to fight against unfair wages, unsafe conditions and inadequate medical benefits.

Local 364 Vice President Mike told Labor Radio on KBOO that Mondelēz International has the time, money and lawyers and has been intransigent since 2016. He said they threaten “if we don’t take what they want, they will shut down bakeries and send it to Mexico.” (tinyurl.com/pmnszc2s) Mondelēz sent 600 jobs from Chicago to Mexico in 2016 and closed New Jersey and Georgia production lines earlier this year.

Workers at Mexican Mondelēz plants make 97 cents an hour and have to be bussed in long distances to work 12-hour shifts. Local 364 members said management tells them the benefits they receive in the U.S. are only possible because Mexican workers are paid so little. One worker at the Portland rally said workers reject that logic: “Nobody here is asking for Mexican workers to be exploited.” Mexican workers want a union too.

Burlingham said Mondelēz offered Nabisco workers a one-year contract at the beginning of the COVID pandemic. The contract was passed nationally, but the Portland union rejected it, because it allows for a constant turnover, a revolving door of workers. In reference to the rejected contract terms, he explained: “Temp workers have no benefits and make less of a wage.” Burlingham emphasized that Mondelēz will be exploiting workers here, just like they are exploiting Mexican workers. “Not once do we say workers in Mexico don’t deserve a job; but when their work is being exploited for profit of a company like this, that’s not OK.”

The workers say they plan to strike until the company agrees to negotiate a new contract. One worker speaking at the Aug. 21 rally said, “We didn’t know there were so many union groups. Thanks for all the support. We will be there for you when your turn comes.”

Nabisco exploits workers just like Amazon, and we should show support any way we can.