What Secretary of Homeland Security Alejandro Mayorkas said and did in a brief trip to Miami Aug. 19 reflects and exemplifies 200 years of U.S. assaults on Haiti.

In 1805, a year after its hard-won independence, President Thomas Jefferson imposed an embargo on Haiti that lasted until 1862. The U.S. invaded Haiti in 1915, after stealing its gold reserves, and stayed until 1934. From 1957-86 the U.S. supported the hated Duvalier dynasty. It then came back in 2004 to remove President Jean-Bertrand Aristide and is still there under the guise of various U.N. programs.

Mayorkas met with representatives of the Cuban community  in Miami to announce new sanctions against three Cuban officials. And he met with representatives of the Haitian community to announce that the Biden administration would not be extending Temporary Protected Status for Haitians, even after the devastating 7.2 earthquake Aug. 14 — made even more devastating when Tropical Storm Grace drenched Haiti Aug. 16.

Holders of TPS can work in the U.S. legally. Members of the Haitian diaspora in the U.S. sent over $3.8 billion to Haiti in 2020, so this decision on TPS is going to have a major financial impact on Haiti, where remittances make up about one-third of its economy.

The Department of Homeland Security sent two planes filled with deportees to Haiti — after the August earthquake. Because TPS has been limited, more deportations are expected. It’s not clear how this decision on TPS will affect the 10-15,000 Haitians seeking asylum, who are waiting on the Mexican border to enter the U.S.

Relief efforts and conditions in Haiti 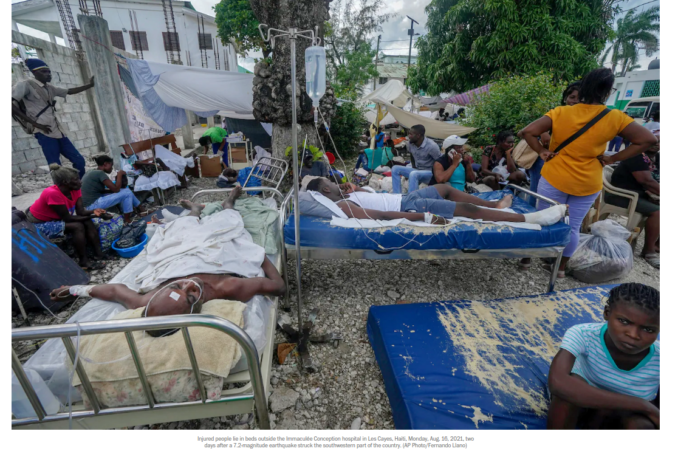 Even though the Aug. 14 earthquake was stronger and shallower than the one in 2010, it occurred in a less populated area. The Haitian government is reporting 2,200 deaths with over 300 people still missing, but this may be an undercount. At least 12,000 people suffered serious injuries. Many small villages are cut off by mudslides and collapsed bridges, so this is a very preliminary figure. The government is estimating 500,000 people lost their homes, with residences destroyed or so damaged as to be unusable.

A road between Jérémie and Les Cayes, the two largest towns on the Triburon peninsula, was only passable by motorcycle for days after the earthquake. In some spots, the motorcyclists had to take their bags off, push their bikes by hand through the mudslide, then go back for their bags. (tinyurl.com/3vdyn88t)

There are reports that subsistence farmers have lost fields and crops due to mudslides. 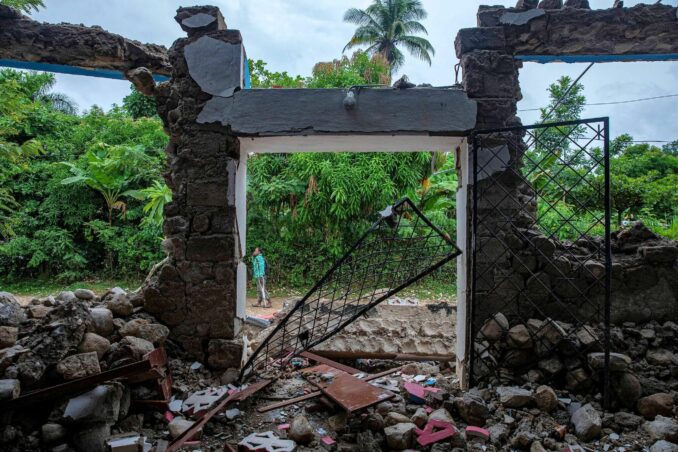 The U.N. World Food Program was already planning on initiating a food supplement program in the three departments — Grand’Anse, Sud and Nippes — that were most affected by the earthquake and Tropical Storm Grace, before these two disasters occurred. According to U.N. survey data, 25% of the people living in these departments suffered from “acute food insecurity,” that is, they frequently did not get the food they needed for their normal activities, even before the earthquake.

Food is getting through to the main towns, but isolated communities have only themselves to rely on. Some towns have so much devastation that helicopters can’t safely land.

Cuba, Mexico, Chile and the Dominican Republic have all sent teams of doctors or rescue workers to the earthquake-stricken areas. Cuban medical workers were already on the scene as part of Cuba’s aid to Haiti.

What has distinguished the U.S. response is that in place of sending the two hospital ships which it has on the East Coast, the U.S. sent the USS Arlington, an amphibious transport dock with 400 sailors and 220 Marines.

Some Haitians on twitter, along with commenters on some conservative websites, have expressed support for the presence of U.S. troops. Others have expressed opposition, seeing the U.S. “humanitarian mission” as a military pretext. Haïti-Liberté feels that “the Haitian people must now confront the arrogance and repressive desires of the army of the imperialist power dominating the region.” (tinyurl.com/tcr47jw7)

Beyond the pain, suffering and deaths caused by the earthquake and tropical storm lies the threat of COVID-19. Less than 0.1% of Haitians have been vaccinated as of Aug. 1; inoculations only began the last week of July. Buying masks and soap for hand washing is financially out of reach for most Haitians, who live on less than $2 a day.