After two baristas were fired by Starbucks for organizing co-workers against unfair management, they took their grievances to the National Labor Relations Board and won.

The NLRB ruled Starbucks had engaged in union-busting tactics and should reinstate the two employees with back-pay compensation. Starbucks filed an appeal and doesn’t need to take any action until the appeal process, which could take months, is complete. This is a move to frustrate organizing attempts and delay justice for the fired workers.

However, T.J. Bussiere and Echo Nowakowska are not defeated, and the way they won a favorable NLRB ruling can teach organizers how to fight corporate giants like Starbucks. In the Aug. 12 Philadelphia Inquirer, Bussiere and Nowakowska were interviewed by Juliana Feliciano Reyes. The two organizers suggest tactics they hope will aid other grassroots union activists. (tinyurl.com/md3h6js)

Go public: Protests at the store, handing out leaflets describing illegal practices by Starbucks and posting on social media created a case, pushing NLRB lawyers to argue that the workers had engaged in a concerted, protected activity to improve working conditions. This is perfectly legal and within workers’ rights. Firing workers for union organizing is a violation of the National Labor Relations Act. 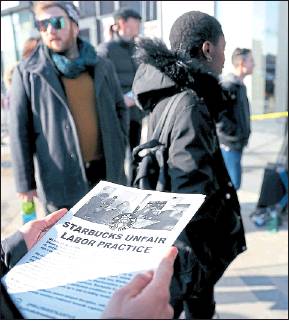 A 2019 protest outside Starbucks, Philadelphia.

Posting to social media doesn’t have to go viral; posting is a public record of your efforts and therefore is evidence, according to the NLRB. In the case of the Starbuck baristas, the posts showed that management was monitoring the workers’ accounts.

Know your legal rights: You are allowed to complain about unfair management and even call for a supervisor to be terminated. You are allowed to demonstrate against poor working conditions at your place of employment without fear of retaliation.

Bussiere says the success really came from organizing their co-workers. It is about engaging in conversations, listening to workers’ experiences and uniting against corporate exploitation. Organized workers have the power to defeat the capitalist ruling class.