Berkeley, Calif. — A crowd of 90 people marched through downtown here on Aug. 12 chanting “Housing is a human right.” They demanded that the city call a halt to police sweeps of unhoused people and the tearing down of homeless encampments. 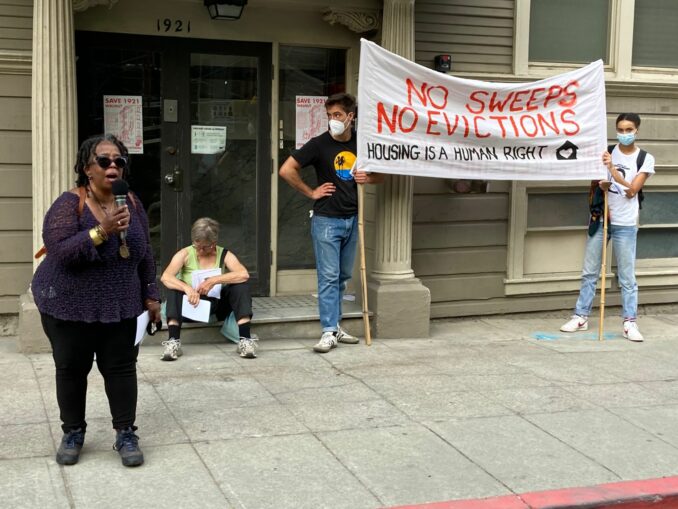 “With the unhoused community reeling from an eviction at SeaBreeze Encampment, and far too many ‘sweeps’ on the horizon, we need to mobilize for the human rights of our unhoused and housed neighbors at risk of eviction,” said a statement from a coalition that includes Berkeley Copwatch, Homeless Action Center and other groups.

“Families live in fear of losing their homes at any moment as both the eviction moratorium and unemployment funds come to an end. The city is already moving to displace.

“We are not trash, stop sweeping us!”

Former City Council member Cheryl Davila said the University of California “wants to kick out people from the university-owned building at 1921 Walnut who are living in rent-controlled units.” She said real estate speculators “want to see nothing but ‘market-rate’ units,” with the result that many poor and working people won’t be able to live in the city any more.

But it doesn’t have to be this way. One speaker, citing Rent Board figures, said the city of Berkeley had 3,700 known vacant units. “That’s housing for 10,000 people!”

Osha Neumann, an attorney with the East Bay Community Law Center as well as a painter and muralist, said: “Many of the people living on the streets value their autonomy, their ability to make their own lives and community. But the authorities can’t understand that because they don’t know how to stop and talk to people.” He said the newly rebuilt downtown plaza “is designed to be uncomfortable for the homeless,” adding, “What happened to the benches that people used to sit on?”

A speaker from Poor Magazine exclaimed: “No matter how many times you sweep me, incarcerate me, study me … our fight will go on, till housing is an established human right for everyone.”