Translated by Walter Lippmann for CubaNews and edited by Workers World. 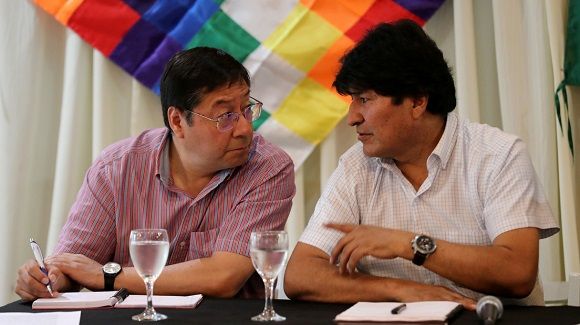 “Once again, the coup plotters announce antidemocratic mobilizations against the legitimate, legal and constitutional government of our brother President Luis Arce (@LuchoXBolivia). They defend paramilitaries and call them ‘activists.’ The people will not fall for provocations and will defend democracy,” Morales wrote on Twitter.

The Indigenous leader referred to the demonstrations promoted by right-wing parties and other organizations in the coming days as steps to exert pressure on the government to force it to reopen the judicial investigation known as the Electoral Fraud case.

The aforementioned case investigated alleged fraud in the vote-counting of the 2019 general elections, in which Morales was reelected in the first round.

The observer mission of the Organization of American States had issued a report based on incomplete data on irregularities in the automated counting system and suggested that the objective was to benefit Morales. The document served as an excuse for the right to start the coup that ended with the resignation of Morales and the establishment of an unconstitutional government headed by Jeanine Áñez.

Later studies concluded that although there were irregularities in the process, they did not carry enough weight to change the voting trend, which at all times favored Morales. Thus the conclusion rejected the fraud narrative and validated the thesis that a coup deposed Morales in 2019.

The most recent analysis on the subject, officially commissioned by the government of Bolivia to a group of investigations of the University of Salamanca, Spain, reached the same conclusion; as a result, the Prosecutor’s Office closed the case.

However, the right-wing and related organizations insist on continuing with the investigation. To achieve this goal, they announced demonstrations and roadblocks in different parts of the country for the next few days.

This Aug. 4, when speaking at the MAS congress, where the directions of the ruling party are defined for the next few years, Morales insisted on the unity of the militants in the face of threats that come both from the right and the U.S. regime, which “does not want to let the MAS continue.”

The congress takes place in Lauca Ñ, a town in the tropical region of the department of Cochabamba, the main political bastion of the organization in which President Arce is also a member.

Morales highlighted the importance for Bolivia of the MAS, which he considered the largest political party in the country’s history. The MAS returned to government after 11 months of an interim administration that emerged from a coup.

“Brothers and sisters, united we are invincible. Again the right is threatening; now we are better prepared, and here we are going to prepare better, with discipline to continue defeating the right,” he said.

“The strategy of the right in 2019 was to kill the Movement to Socialism (. . .) but we are alive,” said Bolivian President Luis Arce, who preceded Morales before an audience of hundreds of representatives of social organizations from workers, peasants and Indigenous people.