Despite attacks and repression of their Party by the government, the Communist Party of Kenya held its first-ever Women’s League Convention July 31. The convention began with a hoisting of the Party’s flag, the singing of The Internationale and other revolutionary songs being performed. 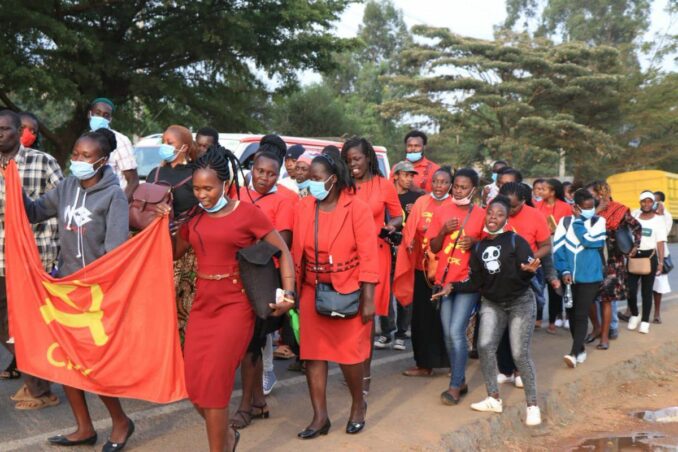 Over 340 women marched after the inaugural Women’s League Convention of the Communist Party of Kenya, Aug. 1.

The Party’s women cadre spent the day debating and discussing the conditions of women in Kenya. They rededicated themselves to the struggle for socialism and maintained that the full liberation of women would never come under capitalism. They resolved to condemn bourgeois feminism as an indicator that the experience of all women in Kenya is not monolithic.

The keynote speaker for the convention was Comrade Sefu Sani, an organizer and Kenyan Communist who spoke of the necessity of class analysis when handling the women’s equation in class struggle. She spoke of and condemned the bourgeois women of Kenya, who consistently collaborate with the corrupt regime to throw working-class women under the bus. She ended her speech by emphasizing that the central role of the women’s cadre must be to immediately begin building the Party.

Comrade Sani said: “We have to understand that as revolutionaries, we must always struggle for the liberation of our society from the exploitation and oppression of women by men. This must start from our own homes: in our relationships with our mothers, our sisters, our girlfriends, our wives and our daughters, we must struggle to liberate ourselves from abusing, using and exploiting women. We must struggle to cure the disease of male chauvinism within ourselves that we have inherited from our negative traditional cultures that today blossom with the blessing of capitalism and imperialism.” (bit.ly/3yq4XqK)

Congratulations to the women comrades of the Communist Party of Kenya for this historic advance!