Aug. 4 — While travelling on the winding, two-lane road leading into Brookwood, one gets a sense of what a community battle the Warrior Met Coal strike represents. Signs declaring “We Are One” or “No contract, No coal” and displaying the United Mine Workers of America logo are planted in yards of homes or attached to poles and fences.

Closer to the ballpark where the rally is about to be held, there is the Warrior Met Coal office, surrounded by barricades and a line of buses used to take the scabs back and forth to work. The picket line-crossers’ cars are parked in the building’s lot, partially obscured by a tarp enclosure.

This writer, along with union and community members — many of them, like myself, United Auto Workers (UAW) retirees — came to Brookwood from Atlanta on two buses and a 15-passenger van. 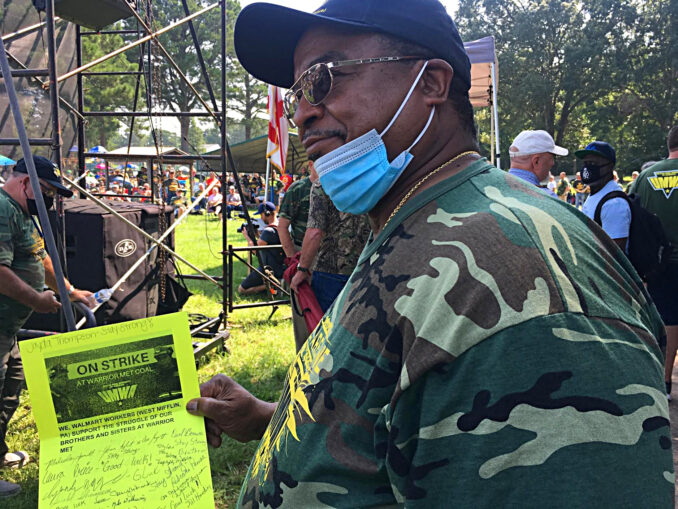 The park’s green grass was occupied by hundreds upon hundreds of miners and their families, seated in lawn chairs, some under tents and pavilions, others right in front of the stage. Nearly 40 buses brought these miners from Pennsylvania, Ohio, New York, Indiana, Illinois, West Virginia, Virginia and Kentucky. Some travelled as long as 13 hours to show their solidarity with the Warrior Met Coal strikers, now in their fifth month of 24-hour-a-day picketing.

The unity with the strikers, who have faced the often dangerous conditions of the mining industry and won hard-fought victories against the bosses, is palpable. Most are wearing a camouflage UMWA T-shirt, signifying the “war” miners have fought for over 100 years and are fighting now — for the rights to decent pay, health benefits, safety on the job and their union.

For three hours, union delegations came to the microphone, one after another, to offer their support, many bringing financial contributions of hundreds and thousands of dollars to help sustain the strikers’ families. International presidents of unions, leaders of state labor councils and representatives of union locals all called for active solidarity, denounced the aggressive and greedy tactics of Warrior Met and praised the determination of the Brookwood strikers.

Here is just a short list illustrating the impressive display of union solidarity that could be seen: American Federation of State, County and Municipal Employees (AFSCME), American Federation of Teachers (AFT), Communications Workers of America (CWA), International Longshoremen’s Association (ILA) and UAW. Flight attendants, steelworkers, transportation workers and so many more voiced anger at the treatment of the workers and confidence in their victory. “One day longer, one day stronger” was chanted repeatedly.

Showing the degree of local community support, a card on bright green paper was brought to the stage. It was turned in at the “How to Support the Strike” table and was signed by several dozen workers at the local Walmart who had donated money to the strikers.

Labor reporter Kim Kelly tweeted on Aug. 5: “At yesterday’s UMWA rally, one of the most pointed messages came from @ILAUnion, who hinted at the idea of blocking Warrior Met coal exports. If you control the docks, you control everything—and dockworkers’ unions have a long history of flexing their power for righteous causes.” International Longshoremen’s Association Local 1410 is the dockworkers’ union at the Alabama port of Mobile, where Warrior Met coal is shipped out to global customers.

A particular target of many of the speakers was Warrior Met’s largest stockholder and the world’s largest asset manager, BlackRock. Warrior Met was formed by Wall Street financiers who grabbed up the longtime Brookwood mining company, Jim Walters Energy, when it faced bankruptcy in 2015. With the assistance of a bankruptcy judge, Warrior Met forced a concessionary contract on the unionized Mine Workers, under threat of losing their jobs as well as their union. 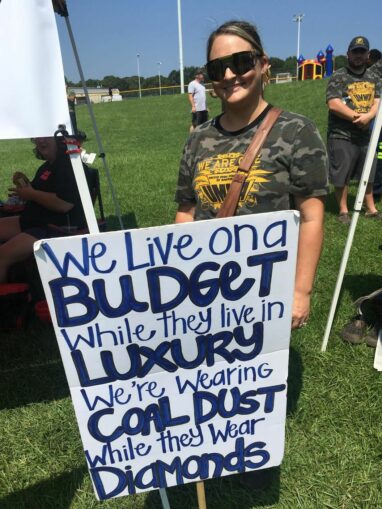 At the time, Warrior Met promised that with the return to profitability, the concessions would be rescinded in the 2021 contract and the miners’ wages and benefits restored. Well, as speakers repeatedly said, “they lied.”

Before the strike, Warrior Met CEO Walt Scheller stated the company was doing well: “Despite the ongoing impact of COVID-19 on [steel-producing] met coal demand and pricing worldwide, we were pleased to be cash-flow positive again in the fourth quarter and nearly break-even for the year.” (businesswire.com)

After an insulting contract was turned down overwhelmingly by the Mine Workers just two weeks into the strike, Warrior Met has stonewalled negotiations, brought in scabs and used state and local police to threaten and arrest strikers and their supporters. The strike has had an impact; the company admits that it had $7 million in strike-related losses, and coal production fell by over 40% in the second quarter of 2021. (tinyurl.com/3v6xx2m8)

The Brookwood mines produce a highly sought after type of coal used in steel production. It is exported around the world and is financing Warrior Met executives’ multimillion-dollar salaries and substantial profits to its stockholders.

The Alabama shafts are some of the deepest in the U.S., a mile down where only the light from the miner’s helmet breaks the darkness. They work 10- to 12-hour days, six and seven days a week. Miners complain bitterly about the company’s refusal to give them federal holidays off, like Memorial Day or the 4th of July, much less vacation time to spend with their families.

There are multiple ways to offer material support to help the Brookwood Mine Workers win this strike. See the UMWA website (umwa.org) and Facebook page for more information.