Cops assaulted a peaceful protest and barbecue on July 27 outside Philadelphia Mayor Jim Kenney’s condominium. The fifth “Tuesdays at Kenney’s” protest since May 25 had been organized to demand more action to reduce homelessness in the city.

Organizers were grilling hamburgers and setting food and drinks on tables at curbside, when Civil Affairs Sergeant Eric Reiser walked past them onto condominium property and announced people had to move. The four or five participants on private property, including this Workers World reporter, immediately began moving to the public sidewalk. 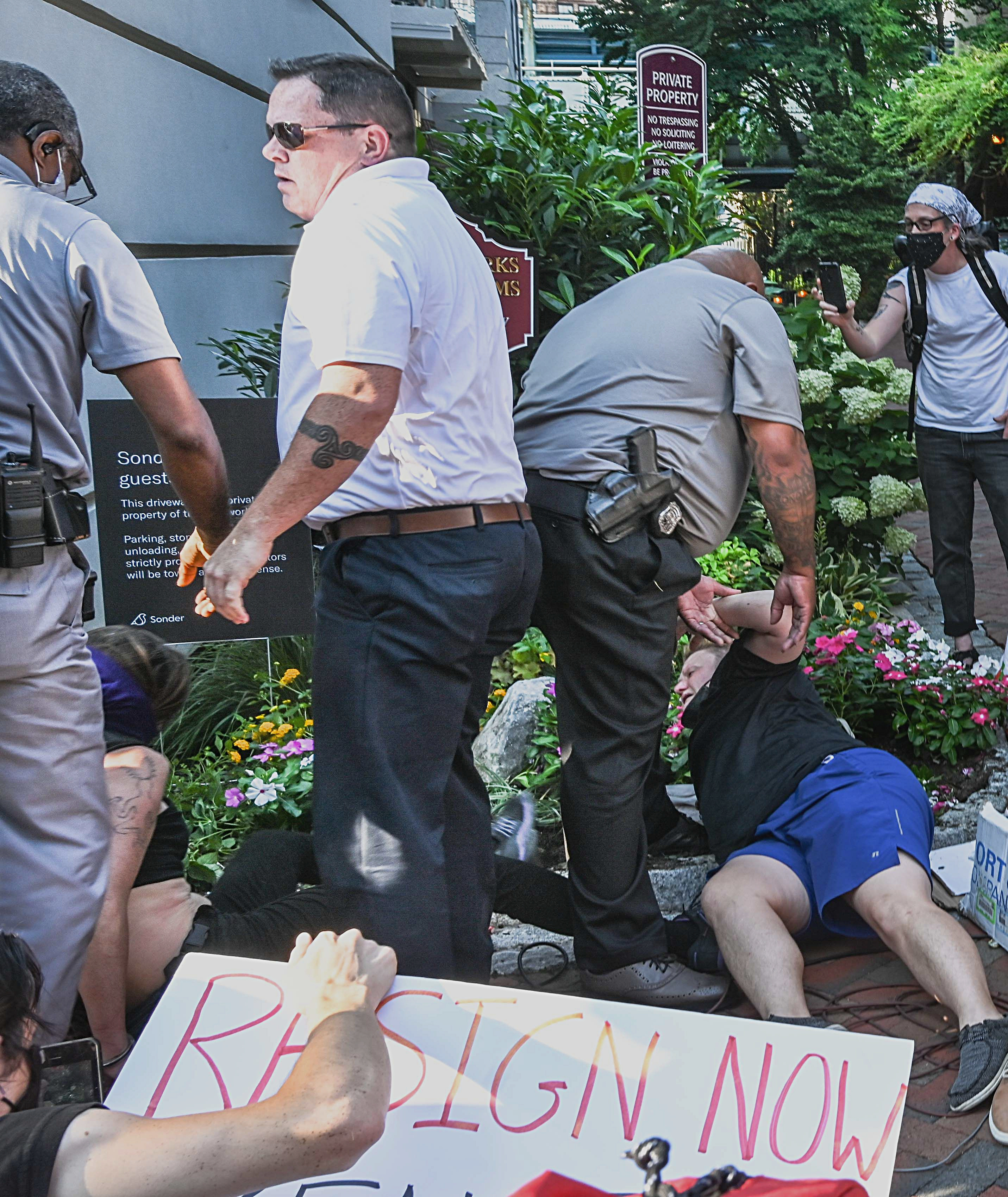 One of the participants didn’t walk fast enough in the eyes of the cop, and he violently pushed her. She would have fallen to the ground, if I hadn’t prevented her fall with my right arm.

The cop, a Civil Affairs sergeant, further escalated the confrontation by threatening to arrest the victim of his assault. He announced organizers had 10 minutes to remove tables and leave; but minutes later he ordered cops from the Civil Affairs, Traffic and Narcotics Strike Force units to rush in, causing a melee.

ACT UP spokesperson Max Ray-Riek later told public radio/television WHYY: “The Philadelphia Police Department forcibly removed us and refused us our First Amendment right to protest. Officers shoved people and stepped on or kicked people, grabbed people by their throats and dragged them.” (July 28)

ACT UP Philadelphia stated on Facebook: “Two members were forcibly removed by law enforcement; a total of four members are now getting medical attention as a result of police violence, and we are standing by to support.

“Our BBQ was going to be a peaceful speakout against Mayor Kenney’s policies that keep people homeless. We had spent several days talking to folks who are unhoused and directly impacted by these policies and inviting them to enjoy a BBQ with us and speak out for their rights. Instead, Mayor Kenney had his police use violence against protestors once again.” (facebook.com/actupphilly, July 27)

A spokesperson for Kenney told WHYY, the mayor “learned of the incident after it was over and was not on-site during the protest activity.” That statement doesn’t deny that he ordered the police to remove the demonstration.  The two people arrested were charged with assaulting an officer and other offenses.  They were then released on their own recognizance.

ACT UP has been demanding that “the city place a moratorium on all evictions; establish an oversight board comprised of unhoused individuals and those using OHS services to review OHS policies, practices and personnel; reopen COVID hotels until everyone has access to housing; institute housing-first, trauma-informed programs that swiftly place people in permanent housing; remove Office of Homeless Services Director Liz Hersh and all OHS upper management from office; and evaluate every contractor to confirm they are providing true, shelter-informed, housing-first care.” (June 29)

ACT UP Organizer Jamaal Henderson said they will continue to hold protests. “We’re not going to let Philadelphia PD bully us into not exercising our constitutional right to protest,” he said. (Philadelphia Inquirer, July 28)