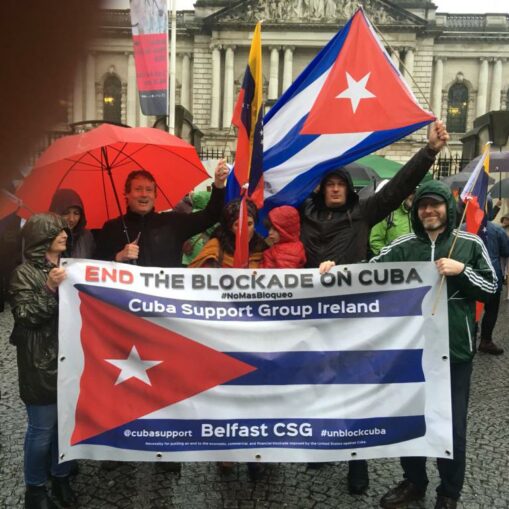 The following lightly edited article first appeared in Resumen English July 29, 2021, one day before U.S. President Joe Biden took measures adding additional sanctions on Cubans, while openly assisting Cuban dissidents living in Miami.  Many of the countries providing aid to Cuba must do so using military ships and planes in order to circumvent the U.S. embargo. A red salute to all those who continue to find ways to support revolutionary Cuba.

Those who encouraged the riots in Cuba on July 11 were left empty-handed. The violent events that took place that day have been forgotten, and now Cuba is trending for more moving reasons. In just two weeks, the island has received thousands of expressions of solidarity and tons of real humanitarian aid destined to help us face the economic and health crisis in the country.

Russian Ambassador to the island Andrei Guskov assured that the shipment “is a token of the respect and affection my country feels for Cuba, that land of freedom suffocated by the U.S. blockade.”

The Bolivian government confirmed the shipment of 2.5 tons of syringes, 16.5 tons of food and 1 ton of medical and biosecurity material. “From the Plurinational State of Bolivia, we raise our voices of dignity, sovereignty, resistance and solidarity with the Cuban revolution,” President Luis Arce said upon releasing the news.

“Solidarity is not giving our leftovers, but sharing the little we have,” Arce added and assured that he is discussing with Bolivian social and trade union organizations other forms of support to the Caribbean island.

In his latest morning conference, AMLO recalled that almost all the countries worldwide oppose the blockade, “that medieval and inhumane policy” that the U.S. insists on maintaining.

“Those nations that vote each year in the United Nations General Assembly against this interference policy should turn their support for Cuba into action. The island needs it today more than ever,” he warned; and [he] recalled that in the last voting held in June, 184 nations were in favor of eliminating the blockade, three abstained and two (the U.S. and Israel) voted in favor of maintaining it.

The diaspora has also mobilized to support its people. Cubans in Japan are collecting medical supplies for Cuban families.

The Cuban Embassy in that Asian country has already received 60 isolation gowns, 1,000 surgical masks and 120 face masks, which will arrive in Cuba in the coming weeks with the Olympic delegation taking part in the Tokyo 2020 games.

And in the U.S. itself, solidarity activists and caring people of good will have mobilized funds to buy 6 million syringes for the island; 1.7 million of them have already arrived prompting President Diaz Canel to comment on his twitter, “we will not tire of saying thanks to the noble American people.”

One might think that this gesture of human kindness would break into the mainstream media, but news from there on Cuba is pretty much reserved for those who put forth lies and hate or call for intervention and the destruction of the gains of the Revolution.

Something interesting has also happened inside the island since the July 11 riots. From social networks, youth, student and union movements have created campaigns to collect supplies for Matanzas, which experienced an upsurge in the number of COVID-19 cases in the last few weeks.

Local companies even made cars, bicycles and motorcycles available to transport and pick up the products. Cuba has moved forward together.

Where were the people who demanded “humanitarian aid” when the U.S. banned the entrance of a Chinese ship carrying supplies for COVID-19 for Cuba? Where were they when Trump prevented U.S. citizens from sending remittances to their families on the island?

Today they are not present either. Before these demonstrations of love and solidarity, silence prevails from the promoters of the SOSCUBA campaign — which circulated in the networks days before the riots seeking a social uprising in Cuba. They expected bombs to hit the island, instead of food and medicines. They expected hatred among Cubans would grow. Instead, they were left emptyhanded.