Bulletin, Aug. 3: Tonight the CDC announced that the eviction moratorium would be extended another 60 days in parts of the country with “substantial and high levels of community transmission” – about 90% of the U.S. This face-saving concession from President Joe Biden and the Democrats was only granted after there were protests around the country, including on the steps of the Capitol.

Having a roof over one’s head is a fundamental human right.

The 1948 U.N. Universal Declaration on Human Rights, supplemented by subsequent international conventions, recognizes the right to “adequate food, clothing and housing.” Member countries are supposed to uphold the charter. Yet even in developed capitalist countries like the U.S., millions are houseless.

The ranks of the houseless are about to swell due to the end of the federal eviction moratorium July 31. Put into effect by the Centers for Disease Control and Prevention in September and extended several times, the moratorium kept millions of households sheltered. 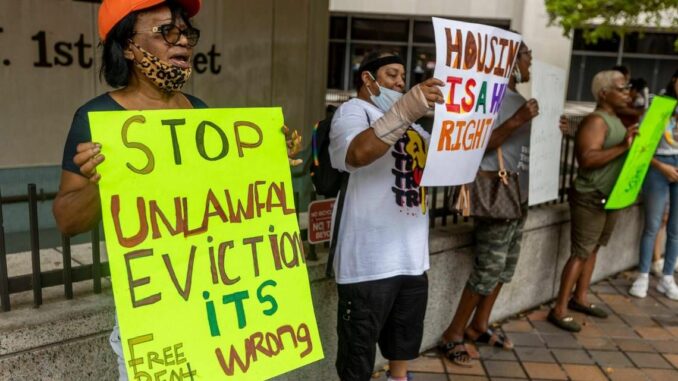 Now some 3.6 million think it likely they will be put out of their living quarters in the next two months, according to the Census Bureau’s Household Pulse Survey, which tracks the pandemic’s impact. Over twice that number reported falling behind in their rent. Evictions would create a public health emergency, with people forced to live in crowded shelters — especially with COVID cases rising again as the delta variant spreads.

“The moratorium has shielded struggling renters from eviction whether they lived in public or private housing, as long as they could prove they had lost income during the pandemic, attempted to obtain rental assistance and made an effort to pay as much rent as possible,” the July 31 New York Times explained. “For many renters and advocates, the expiration has a particularly painful sting because only a small fraction of the rent assistance approved by Congress has been distributed.”

Of the $47 billion in rental assistance approved by Congress, only $3 billion has been distributed. Many who qualified for rental assistance due to pandemic-related economic distress, but were not able to access the aid, now owe back rent they cannot pay. Yet President Joe Biden declined on July 29 to extend the moratorium. 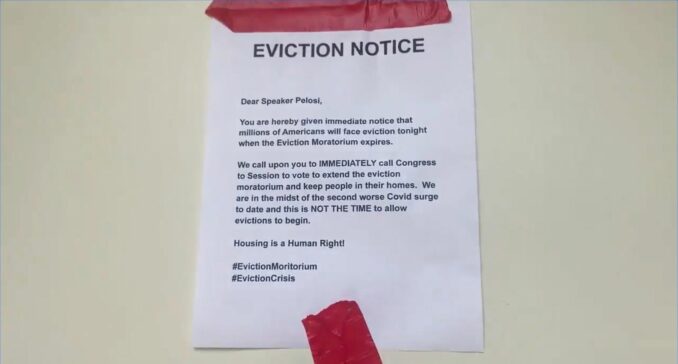 As the moratorium expired, Congressional Reps. Cori Bush, Ilhan Omar and Ayanna Pressley slept outside on the steps of the Capitol overnight to draw attention to the problem. They condemned Congresspersons, including Democrats, who went on summer recess rather than stick around long enough to extend the stay on evictions.

Not everyone wants to see the moratorium on evictions continued. Powerful big landlords and organizations such as the National Association of Realtors filed lawsuits and lobbied to try to end the moratorium before July 31. Republican Senators Pat Toomey and Mike Crapo took $183,000 and $281,000, respectively, from real estate groups; both spoke in Congress against the moratorium last December.

Billionaires like Jeff Bezos are raking in obscene record profits; the stock market is booming, and the gross domestic product is approaching pre-pandemic levels. But 9.5 million people, according to the Bureau of Labor Statistics, are still officially unemployed. Many more are underemployed, underpaid, forced by the COVID crisis to stay at home or have given up looking for work.

Getting the COVID pandemic under control will not by itself resolve the housing crisis. According to the National Low Income Housing Coalition, full-time workers being paid the federal minimum wage cannot afford a two-bedroom apartment anywhere in the U.S. and can only afford a one-bedroom in 7% of U.S. counties.

Low wage workers have to work more than one job just to afford shelter.

This is criminal. But it’s par for the course under capitalism, because human needs and human rights take a back seat to corporate profit-taking.

There must be a moratorium on evictions and foreclosures — one with no limiting conditions and no expiration date. The temporary supplements to regular unemployment benefits must be reinstated immediately. Minimum wage must be a living wage — even $15 an hour is not enough!

These are righteous demands, but the capitalist class will not grant them without a fight.

Friedrich Engels wrote a series of articles from 1872-73 on “The Housing Question.” His words are relevant today: “Only by the solution of the social question, that is, by the abolition of the capitalist mode of production, is the solution of the housing question made possible.”