An incarcerated person must be very sick before the prison administration will allow them to go to an outside hospital. Such was the case for political prisoner Mumia Abu-Jamal, who contracted COVID-19 as a result of his incarceration in a Pennsylvania prison. Mumia also suffers from congestive heart failure, a debilitating disease in which the heart muscle has weakened and cannot pump well, so fluid surrounds it, making it difficult to breathe, and therefore to walk or run. 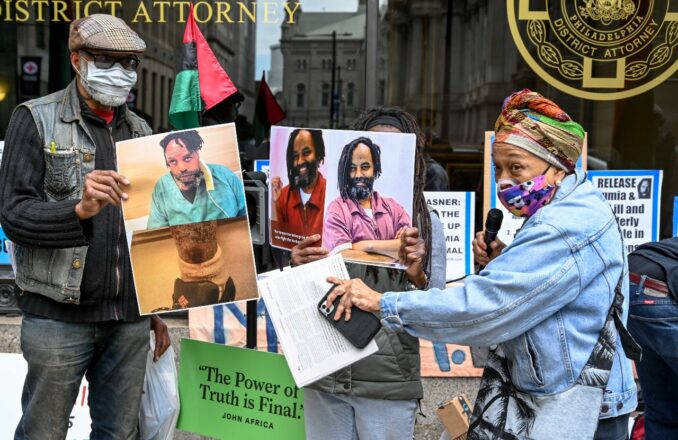 In addition, Mumia has hepatitis C, cirrhosis of the liver, hypertension and a severe skin condition. Despite this, Mumia lay shackled to a hospital bed for four days in February and again in April. There is no way he could have attempted to escape. A restraining cuff was placed on his ankle, worsening the skin condition. It became raw, sore and painful.

These are clearly deliberate acts of torture, meant to harm and dehumanize Mumia. Also, an armed guard is stationed with an incarcerated person 24 hours a day, and another guard can be located outside on the grounds of the facility.

At a virtual press conference April 15, Dr. Johanna Fernandez of the Campaign to Bring Mumia Home said, “Mumia is shackled to a hospital bed right now. Loud and clear are the echoes of chattel slavery in the Americas, that developed handcuffs, shackles and fetters to control the enslaved population. This practice is now common in prisons throughout the U.S. Pennsylvania Department of Corrections administrator John Wetzel publicly denounced white supremacy, but his prisons are practicing a system of racist barbarity.” (Workers World, April 22)

A team of U.N. human rights experts issued a statement April 20 saying: “The use of shackles during his hospital stays is deplorable and causes Mr. Abu-Jamal additional and unnecessary suffering. International standards on the treatment of prisoners clearly stipulate that instruments of restraint are to be imposed only when no lesser form of control would be effective to address the risks posed by unrestricted movement.” (tinyurl.com/8we77djp)

Shackling of elderly or chronically ill prisoners has many negative impacts: risk of falls and deep venous thrombosis, damage to skin integrity, increased pain from poor mobility and positioning, and difficulty by health care workers to properly assess a patient’s condition. “The number of inmates over the age of 55 has increased 400% from 1993 to 2013, stated the U.S. Department of Justice. As of October 2018, more than 18% of prison inmates are over 50 years of age. In general, seniors need more medication and medical attention.” (tinyurl.com/2h65czr9)

When an incarcerated person is shackled, this usually means one wrist and one ankle are clamped with a metal cuff and secured by a chain to the bed. The excuse is the individual may try to escape. After being taken to a hospital from a prison in Cook County, Ill., after testing positive for COVID-19, Jeffrey Pendleton, 59, died a week later, chained to the hospital bed. Pendleton was fighting for his life. His brothers filed a lawsuit stating that the shackling violated his constitutional rights.  The prison had a 24-hour armed guard watch him.

The United Nations, Amnesty International and other prisoner-advocate groups condemn the practice of shackling during childbirth. The American Nurses Association and American College of Obstetricians and Gynecologists oppose the practice, citing the risk of harm to both the pregnant woman and fetus. 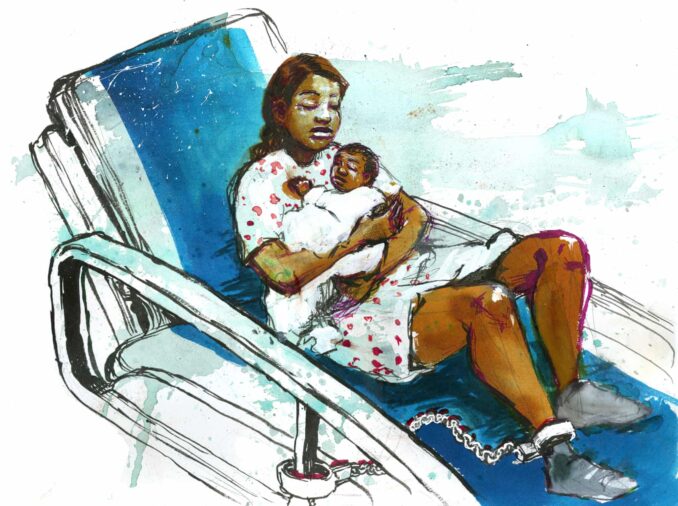 The American Psychological Association emphasizes that shackling during childbirth is disproportionately used against women of color. The APA opposes the practice because of the emotional trauma it causes, especially since many incarcerated women are survivors of sexual abuse and/or physical violence and trauma. Many of them have mental health and substance abuse problems.

Being shackled during medical appointments and labor and delivery increases depression, mental distress, anguish and PTSD. Instead of providing comprehensive health care for people with mental health problems, the capitalist system throws thousands of people into prisons where they are neglected, beaten and tortured.

Generally, shackling makes a person physically unstable, increasing the likelihood of falls and an inability to break the falls. For pregnant prisoners, this means the fetus is put at risk, and the possibility of miscarriage increases. Shackles used during labor and delivery can cause excruciating pain and complications, because the pregnant person cannot freely change positions to help alleviate it. Also,  shackles can cause severe cuts when a person struggles to change position. The APA says the practice can cause life-threatening complications.  (tinyurl.com/2y7ub356)

The APA says doctors have reported the inability to administer epidurals because of restraints. “In one documented case, a person restrained during labor experienced a hip dislocation that caused permanent deformities and pain, stomach muscle tears and an umbilical hernia.”

An ACLU briefing paper on the shackling of imprisoned women and girls states:  “During the final stages of labor, it is important for the physician to act quickly in order to avoid potentially life-threatening emergencies for both the mother and the unborn child. Shackles severely limit this and as such pose a threat to the survival of the fetus. . . . In instances necessitating an emergency C-section, a delay of as little as five minutes is enough to cause permanent brain damage to the child.”

Exploding the myth that women in labor are a threat, thereby giving prison administrations an excuse to abuse them, the ACLU says, “Among the states that have restricted shackling of pregnant prisoners, none have documented instances of women in labor escaping or causing harm to themselves, the public, security guards or medical staff.” (tinyurl.com/2fv9baea)

After delivery, shackles interfere with the bonding process between mother and child. The mother has a hard time safely handling her baby and breastfeeding. The ultimate cruelty is that after the hospital stay, the baby and mother are separated until the prison sentence is over.

In 2018, the First Step Act was enacted. One provision banned shackling of imprisoned individuals during labor and childbirth in federal prisons. However, the law allows for exceptions for flight risk or risk of harm to oneself or others. The law does not apply to state or county prisons, in which 85% of incarcerated women are held throughout the country. As of 2020, 23 states still did not ban shackling of pregnant prisoners. Only in Rhode Island is there legal recourse and the possibility of monetary compensation for people who were shackled during childbirth.

Shackling patients during childbirth should be banned unconditionally at all levels of the carceral system. Anything less than a total ban will allow this dehumanizing practice to continue.

Rules for safe use of restraints

The Nursing Home Reform Act of 1987 set federal guidelines for safe physical and mental care of the elderly on issues such as pressure ulcers, urinary catheters and physical restraints. As a result, the Centers for Medicare and Medicaid Services led an effort to adopt specific regulations around the safe use of physical restraints. The Joint Commission of Accreditation of Hospitals surveys institutions about following industry and governmental standards.

Physical restraint of the elderly is a traumatic experience and thus poses an ethical question for any health care professional. When does the use of physical restraint in caring for a patient supersede the negative outcome of such a practice? Patients describe feeling a loss of dignity and self-respect, anxiety, aggression and social isolation with depression. Health care professionals must carefully weigh the effect of restraining on the overall well-being of the patient.

It is important for caregivers to reflect on personal biases and how those biases may be influencing practice decisions. This is particularly true for caregivers of the incarcerated patient. Attitudes regarding race, homelessness, poverty, drug addiction and gender oppression should be considered when health care institutions educate their staff on the proper care and treatment of incarcerated hospital patients.

The Journal of Medical Ethics published the work of C. Gastmans and K. Milisen, faculty members at The Center for Biomedical Ethics and Law at Catholic University in Leuven, Belgium, in March 2006. The authors describe four values  health care professionals must espouse when caring for the elderly. These values listed below can be expanded to include guidance for the ethical treatment of incarcerated hospital patients:

1) Human Dignity cannot be relinquished so caregivers must make this a priority: “As a first value, we could state that every senior citizen should be treated as a person. Human dignity cannot be relinquished, not even through illness, handicap or approaching death. This value gives rise to the ethical norm that caregivers must give priority to respect for the dignity of older persons.” This first value must encompass the human dignity of the incarcerated. Given the history of the carceral state, caregivers should consider the incarcerated patient may indeed be a victim of state violence and injustice.

2) Freedom of choice and consent: “The ability of human beings to make choices must always be respected in the context of physical restraint. From this derives the ethical norm that caregivers, when physical restraint is being considered, should inform competent older persons and their relatives as fully as possible about the various options. They should provide information — as objectively as possible and in a way that is understandable.”

3) Social and psychological well-being should be taken into account: “Respect for overall well-being is the third value that must be protected. From the choice of overall well-being as a priority value, we can derive the norm that, when making decisions about physical restraint, not only older persons’ physical well-being should be taken into account, but also the social (possibility for contact), psychological (experience of themselves and their relatives) and moral (respect for autonomy, informed consent) dimensions of their well-being.”

The incarcerated patient is coming from a toxic, punitive prison environment. This patient should be considered traumatized, both emotionally and physically. It is essential that caregivers respect and foster the incarcerated patient’s social and psychological well-being to insure the best possible outcome for their hospital stay.

4) Respect for autonomy: “The fourth ethical value gives priority to optimal support for older persons’ ability to do things independently (self-reliance).” The caregiver must be unbiased and recognize the autonomy of the incarcerated patient.

Shackling in the hospital setting should be considered detrimental to recovery. The health care team should have significant input in any decision to physically restrain a hospitalized prisoner. A plan that is individualized will include measures to monitor physical health status and personal needs, along with protection of privacy and psychosocial comfort. (tinyurl.com/2w3bdab2)

Marie Kelly is a registered nurse, and Phebe Eckfeldt is a licensed practical nurse.