The biggest news coming out of the Tokyo 2020 Olympics is not about the pandemic excluding large numbers of crowds at venues and not about unfulfilled expectation of gold medals won by U.S. athletes compared to other countries. 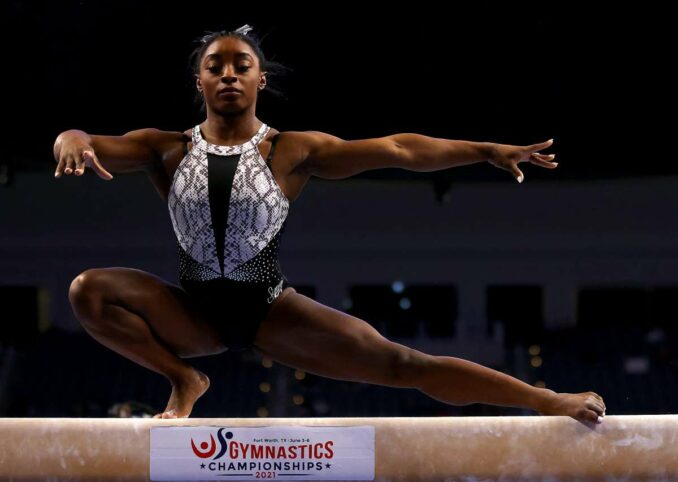 By far, the biggest news during the first Olympic week was that 24-year-old Simone Biles, recognized as the greatest gymnast of all time regardless of gender, withdrew from the Olympics on the first day of the women’s team competition July 27.

The four-time gold-medal-winning African American gymnast was expected to win even more gold medals for team all-around, individual all-around and various apparatus competitions over the two-week span of the Olympics. Biles became legendary when she outshined her competition during the 2016 Rio Olympics in Brazil. Since 2013 she has won seven U.S. all-around national titles and 19 world championships leading up to Tokyo.

Biles is known for her almost unbelievable power in all gymnastic forms, especially vault and floor exercises. Mainstream media had already crowned her a multiple gold medal winner before the games even began.

That changed dramatically during the finals of the gymnastics women’s team event. Biles attempted an Amanar vault — a roundoff back handspring onto the vaulting table, followed by 2 1/2 twists in the air. Biles only did a 1 1/2 twist, looking lost in the air and eventually landing awkwardly with her knees deeply bent. It first appeared that she was physically injured.

Following the vault, she walked out of the arena with her coach. Minutes later, she reappeared to announce that she was bowing out for the rest of the team competition and then hugged her teammates. The U.S. team eventually came in second, taking the silver medal.

During her press conference, Biles explained that her mental health had to take precedence over her competing. “I was second-guessing myself and thought, ‘Best to let the girls do it.’ And they stepped up to the plate. I didn’t want to go out there and do something dumb and get hurt. It’s not worth it. We’re not just athletes; we’re people.”

She went on to say, “It sucks when you’re fighting with your own head. When you think, what is everybody going to think; the internet . . . You just feel that weight of the world. I pushed through that. At the end of the day, we want to walk out of here. I wasn’t in the right mental space.” (Wall Street Journal, July 27)

Solidarity from other gymnasts

All athletes feel pressure to perform to the best of their ability, especially in competitive sports. But the pressure that gymnasts, especially young women, feel is very unique and highly specialized to their sport. Gymnasts are expected to perform incredible twists and multiple flips in the air. That requires them to be constantly mentally aware of their orientation in space in order to land on their feet, safely in control. Any mental distraction can cause disorientation in their spatial memory. This can result in serious injury, including neck injuries that could cause temporary or permanent paralysis. This kind of disorientation for gymnasts is known as the “twisties.”

Christina Myers, a former gymnast and now a gymnastics coach in Birmingham, Ala., told BBC News: “Imagine skydiving, and your parachute won’t open. Your body starts adding extra twists and flips to the skill you’re supposed to be doing. That can affect even skills that feel as routine as walking to an elite gymnast. Your brain wants nothing more than to perform the intended skill correctly, but your body feels like it suddenly has a mind of its own. Because the twisties are mainly psychological, the harder you try to push through, the harder the twisties push back.” (July 28)

Many other gymnasts, current and retired, have expressed support for Biles’ decision to withdraw, citing the pressures they felt to win at all costs. These include members of the “Magnificent Seven,” U.S. gymnasts who won the gold medal as a team at the 1996 Atlanta Olympics.

One of them, Kerri Shrug, felt immense pressure from her coach, the now-disgraced abuser Béla Károlyi, to perform injured — when he forced her to vault on a broken ankle!

Another member of the Seven, Dominique Moceanu, tweeted, “I was 14 [years old with a] tibial stress fracture, left alone with no cervical spine exam after a fall. I competed in the Olympic floor final, minutes later. Simone Biles’s decision demonstrates that we have a say in our own health — a ‘say’ I NEVER felt I had as an Olympian.”

Dominique Dawes, the first Black woman to win a gold medal in the individual all-around gymnastics competition, commented on CNBC in response to Biles: “I felt that [pressure] leading into the 1996 Olympic games in Atlanta, Ga. We were expected to win gold, to make history, to be the first-ever women’s team to do that; and I knew, as one of the leaders of that team, that my scores really did matter, so I feel what she’s feeling. But I hope she knows that we’re behind her every step of the way; and no matter what the outcome is, we love her, and she’s a positive force for the sport of gymnastics.” (July 28)

A survivor of sexual abuse

Biles has said she felt a weight on her shoulders to win gold medals especially over the past year. She is the only woman still in Olympic competition who lived through and survived the sexual abuse of Dr. Larry Nassar, former team doctor for the U.S. women’s national gymnastics team. Nassar assaulted hundreds of young girls and women under the pretext of medical treatment.

In an NBC interview before the Olympics, Biles disclosed she felt compelled to represent all the gymnasts who were molested for many years by Nassar. Biles said, “I feel like, with everything that happened, I had to come back to the sport to be a voice, to have change happen. Because I feel like if there weren’t a remaining survivor in the sport, they would’ve just brushed [the abuse] to the side.

“But since I’m still here, and I have quite a social media presence and platform, they have to do something. So I feel like, coming back, gymnastics wasn’t the only purpose I was supposed to do.” (April 14)

Even though Nassar will be spending the rest of his life in prison after being convicted in 2018, to this day U.S.A. Gymnastics and the United States Olympic and Paralympic Committee have not been held accountable for covering up Nassar’s abuse.

Biles stated in the April 4, 2019, tweet: “The more I learn, the more I hurt. USAG failed us. USOC failed us. Many failed us. And they continue to fail us. Real and actual change isn’t easy, but it’s clear there’s a lot more work that needs to be done.”

Aly Raisman, Biles’ teammate at the 2016 Olympics, echoed the widespread support for her action saying, “I think sometimes people forget that Olympic athletes are human, and the mental health of athletes really matters. When I was training, there really weren’t resources for us to talk about our mental health or even ways to understand it. So I’m not even sure if there are resources out there in Tokyo for Simone. . . .

“We need to be asking the organizations like USA Gymnastics and the United States Olympic Committee: What are you doing to support your athletes, and how can we prevent athletes feeling like they are struggling so much that they can’t finish the competition? What can we learn from this?” (ESPN, July 27)

Recently four-time Grand Slam tennis champion Naomi Osaka withdrew from both the French Open and Wimbledon, citing mental health issues. She also decided not to participate in post-match press conferences — an action which can result in thousands of dollars in fines.

Though Osaka was criticized for taking this stance, she was also praised. Biles credited Osaka for inspiring her to speak about her own mental health issues.

The pandemic since February 2020 has impacted millions of lives on a global scale. Recent reports show that life expectancy inside the U.S. dropped by more than a year since COVID-19 hit. Within that year, millions of people were out in the streets protesting police brutality — a massive outpouring ignited by the murder of George Floyd in May 2020.

Both Biles and Osaka — prominent women of color athletes, unprecedented in their skills and popularity — have been steadfastly outspoken against racism.

Given all the societal issues that Simone Biles and Naomi Osaka face — such as racism, gender inequality, pressure to perform on the highest level and a global pandemic — their decision to put their mental health first is truly heroic and inspiring to others going through similar trauma.