The following statement in solidarity with the Cuban Revolution was initiated by Chilean and Argentine communists and signed by scores of organizations, including Workers World Party. Translation by John Catalinotto, WW managing editor. 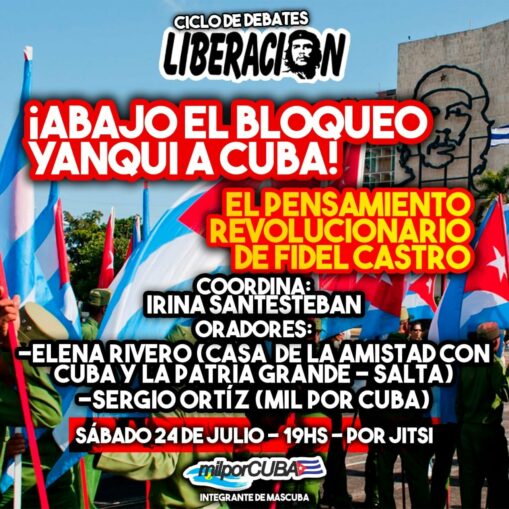 We, the undersigned working-class political parties and anti-imperialist organizations from various countries of the world, raise our voices to express our solidarity with the Cuban people and government, led by President Miguel Díaz-Canel, which are confronting the U.S. blockade and the campaign of aggression against socialist Cuba.

The greatest threat is the U.S. blockade, established in February 1962 and maintained until today, with both Democratic and Republican presidents occupying the White House. The neo-Nazi Donald Trump aggravated it with 243 measures between 2017 and 2021, and Joe Biden keeps them in place, refusing to lift those economic and financial measures, not even the infamous decision to place Cuba on the list of “sponsors of terrorism.”

That continuity of the blockade shows that the U.S. political system is no democracy, as its leaders claim, but a plutocracy, or government of the rich.

The overwhelming majority of countries repudiate that blockade. Votes in the United Nations General Assembly since 1992 have shown this. There have been 29 votes in favor of Cuba, the last one on June 23, with a total of 184 countries against two (the U.S. and Israel).

Notwithstanding this repudiation of the blockade, which the U.N. qualifies as criminal and an act of genocide, Yankee imperialism maintains it.

The U.S. objective is to use hunger and disease to force the surrender of the noble people who opted for the Cuban road to socialism, with its roots in José Martí and the leadership of Fidel Castro, continued with Raúl Castro and now with new generations of leaders, its Communist Party, its mass organizations and the Revolutionary Armed Forces.

As the Assistant Secretary of the U.S. State Department, Lester Mallory, said in 1960, the aim of the blockade is to “provoke hunger, desperation and the overthrow of the government.” So far the blockade has failed in its main objective of overthrowing socialism. It has been relatively successful in generating hunger and desperation in some sectors of the population, due to the shortages derived from the blockade.

Cuba is prevented from trading freely, accessing foreign currency, buying medicines and medical supplies, receiving charter flights and tourist cruises from the U.S., etc. Notwithstanding the international repudiation of the blockade, which it qualifies as criminal and an act of genocide, Yankee imperialism maintains it.

They punish shipping companies that transport oil to Cuba in order to cut off fuel, trade, transportation and electricity generation; they sanction banks that operate with the island, they block money transfers from Cuban relatives abroad, etc.

The Cuban Foreign Minister to the U.N. quantified the direct economic damages between April 2019 and March 2020 at $5.57 billion, which increase to $9.16 billion if computed until December 2020.

These are not just numbers. They translate into many things that the Díaz-Canel government cannot do due to lack of resources. As if that were not enough, the island’s economy suffered the impact of the COVID pandemic and the cessation of tourism, so its gross product fell almost 11 points in 2020. Despite this, the people remained firmly committed to the option of socialism and the party held its VIII Communist Party Congress in April 2021.

At the same time, the Cuban government made remarkable efforts against the pandemic, within its country and in solidarity at the international level. Within Cuba, its scientific and biochemical branch developed five vaccine candidates, two of which have already become vaccines: Abdala and Soberana 02. And Cuba has shown solidarity with many countries through 56 missions of the International Medical Brigade “Henry Reeve,” sending 2,500 doctors and health personnel.

Cuba’s path is not paved with rose petals. There are many thorns that stick and hurt, as well as maneuvers by the “bad neighbor” and the Miami counterrevolutionaries, who with propaganda, networks and dollars, help the counterrevolutionaries from within, as in the case of the San Isidro “cultural” movement, Rosa María Payá’s NGO and others dependent on orders and money transfers from the State Department and USAID.

On July 11, several hundred Cubans gathered in a protest, pained by their unsatisfied basic needs, but driven by mercenaries who carried the baton under the pseudo-humanitarian label of #SOSCuba. With much opportunism, they took advantage of a peak moment of food shortages, fuel and power outages, along with days of increased contagions and deaths from COVID-19. They took to the streets in seven or eight cities, which the imperialist news agencies multiplied to 50. They were hundreds, in total some thousands, but those agencies multiplied them to “multitudes.”

While raising demands against hunger, the gusano leaders and agencies made it clear that their objectives were “freedom” and the “end of communist tyranny.” In other words, political objectives in line with those advocated by Biden, his Secretary of State Antony Blinken, Senators Bob Menendez and Marco Rubio, and other counterrevolutionaries from the Miami sewer.

The Cuban president was in the streets leading the defense of the Cuban Revolution and also to dialogue with the confused but honest part of the protesting people. He was very coherent and very Fidelista in calling on the revolutionaries to win the streets to defend the revolution, and to put himself in the front row in San Antonio de los Baños.

Díaz-Canel made it clear that he knows of several real reasons for the popular complaints, but 95 percent or more of the causes of these shortcomings are to be found in the prolonged Yankee blockade and only 5 percent in government errors, delays, bureaucracy or disorganization.  Let us emphasize: the fundamental cause of the shortages is the genocidal blockade maintained for 60 years by Washington!

It is in the hands of the Cuban government to analyze its part to correct and improve, even under the crossfire of the empire and its vassals. It is necessary to separate the confused or misguided people from the mercenaries who want to return to the semi-colony, the gambling den and the brothel of Batista’s times.

All data must be put in context. It is true that COVID cases have increased, but Cuba’s results are much better than those of the U.S., Brazil and Argentina. The U.S. has 138 times more infections than Cuba and 384 times more deaths. The empire has so far refused to release the use of vaccine patents, as requested by the World Health Organization. And it dares to criticize Cuba in the health field?

For all these reasons, the undersigned parties and organizations ratify our solidarity with Cuba, we defend it from the blockade and the Yankee-Gusano [counterrevolutionary worms] maneuvers, and we are part of its Martí and Fidelista cause, we defend its embassies and consulates attacked in many countries, etc.

We demand the immediate end of the Yankee blockade and we ask that the Nobel Peace Prize be awarded to the Cuban International Medical Brigades “Henry Reeve.”

We demand that the U.S. return the usurped Guantanamo area and nullify the Platt Amendment, and grant freedom for political prisoner Ana Belén Montes, in a U.S. jail for almost 20 years for helping Cuba.

We demand that the U.N. amend its Charter to make a motion voted by two-thirds of the General Assembly binding on the Security Council and the entire entity.

We demand that the central banks of China, Russia and the European Central Bank give a zero-rate credit to Cuba for the damage caused by the blockade between 2019 and 2020, amounting to $9,157,000. Once the blockade is lifted, José Martí’s homeland would be able to return that capital, without interest, in annual installments.