Anti-communist forces — led by the U.S. government — are mounting a no-holds-barred attack on revolutionary Cuba. That country continues to advance with determination on its own road to socialism, begun Jan. 1, 1959, when forces led by Fidel Castro and Ernesto “Ché” Guevara overturned the U.S.-backed government of dictator Fulgencio Batista. 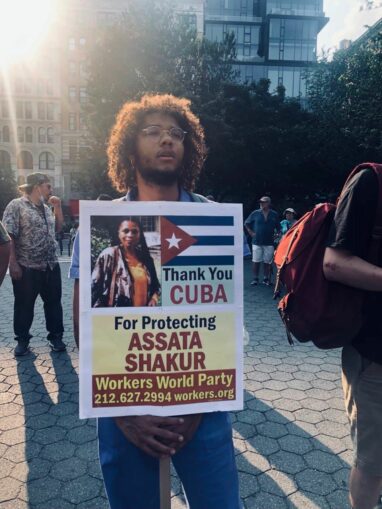 The current assault on Cuba was launched full-scale on social media at the beginning of July. But the U.S. first declared ideological and economic war on Cuba in 1960 by placing a brutal economic and social blockade on the country that remains in place.

Since then the U.S. has tried every tactic to break the Revolution — from direct military might in the 1961 Bay of Pigs (Playa Giron) invasion to creating a secret “Cuban Twitter” to stir unrest and organize “smart mobs” for a “Cuban spring” to overturn the government. (The Guardian, April 3, 2014)

The most recent campaign against Cuba includes thousands of boilerplate anti-Cuba twitter accounts linked to an automated system that rapidly retweets.

Disinformation expert Julián Macías Tovar told Newsweek that 100,000 tweets using an anti-Cuba hashtag were sent July 9, with 500,000 the following day and 1.5 million by July 11. Tovar added: “If there are accounts with few followers who make many tweets or retweets, newly created accounts with a fake profile picture . . . that’s always suspicious.”

Reuters has stated categorically that posts of protests in Cuba — shared in the millions — were falsely mislabeled as anti-Cuban government protests. Some of the photos were in fact pictures of a 2011 protest in Egypt — and some actually of a large crowd gathered in support of Cuba’s 2018 May Day march celebrating its workers revolution! (tinyurl.com/dbh5y7sf)

Disinformation has included cultural intervention, like the promotion of an anti-communist reggaeton song coming from the Miami Cuban community, that has its origin in the wealthy white landowners who fled Cuba when the Revolution triumphed. Over the decades, many physical and psychological operations against Cuba have originated in Miami.

The disinformation campaign launched as some protests were taking place inside Cuba. The country has been hit recently by shortages in food and pandemic-related medical supplies like syringes, to which the U.S. blocks easy access.

Revolutionary Cuba is celebrated for its innovative, comprehensive and free medical care, with medical teams travelling in solidarity to other countries, especially during the pandemic. A recent U.S. political cartoon mocked this achievement, falsely showing a bleeding protester hauled away by grim police boasting of free medical care.

But during the pandemic, Cuba — still classified in the world economy as an “underdeveloped” country — has managed with its socialist planned system to limit COVID-19 deaths to 214 per million people. U.S. profit-oriented health care has lost 1,882 people per million, had over three times more cases per million than Cuba and leads the world in total deaths — now over 625,000. (worldometers.info/coronavirus/#countries, July 21)

Many of the achievements of the Cuban Revolution are unknown to people in the U.S. — though not to the rest of the world — because of the ongoing U.S. campaign against communism. In place since the 19th century, virulent during the 1950s McCarthy era, this anti-communist campaign by the U.S. ruling-class strategists became focused in the 1960s on trying to break the socialist revolution taking place only 90 miles off U.S. shores.

Right-wing Christianity backed capitalism through literature funneled into churches on how to oppose Cuba, China, the USSR and other Communist Party-led or “Communist-leaning” countries. In 1962 the National Governor’s Conference created a committee to coordinate anti-communist high school curricula.

By 1963 U.S. corporations were spending about $25 million a year on anti-communist literature distributed to customers and workers on the job. (Sara Diamond, “Roads to Dominion: Right-Wing Movements and Political Power in the United States,” Guilford Publications, 1995, pp. 50-52)

Big Lie with a vengeance

This is the “War Is Peace” Big Lie with a vengeance! As socialists we know the real legacy of Marxism — based on solidarity in the struggles against injustice and inequality — shines in the beacon of revolutionary Cuba.

Anti-Cuba propaganda is the order of the day for the U.S. government, because Cuba has been so successful in forging ahead in its revolutionary vision, despite the vicious attacks and blockades placed in its way.

Led by its Communist Party over the decades, Cuba has created campaigns, initiatives and formal government agencies to significantly address material inequalities and cultural insensitivities. Government officials have frankly admitted mistakes rooted in the past, and with an electoral system built on full representation of all sectors of the country, have specifically addressed issues facing women, LGBTQ+ people, Afro-Cubans, Indigenous peoples and others with special oppressions.

The current anti-Cuba campaign is tied inextricably to the U.S. war on a socialist future. And no wonder! In a survey from June 11-15, Axios/Momentive found capitalism rapidly losing its popularity with young people in the U.S., with 18-34 year olds now almost evenly split between those who view capitalism negatively and those who view it positively. (tinyurl.com/xrpce8v4)

In a 2020 Gallup poll about elections — a far from radical source — 45% of U.S. people indicated they would vote for a socialist for president. (tinyurl.com/m36u4u2u)

We place the campaign against Cuba in the context of the long U.S.war against communism — and we are alert to how this poison still spreads, virulently alive, through every aspect of life in the U.S.

We are in the midst of a battle of ideas that will determine our future — the future of a socialist Cuba and our own future building a path to socialism.

As Fidel Castro said in his historic remarks on the battle between capitalism and socialism: “A revolution can only be born from culture and ideas. No people become revolutionary by force. Those who sow ideas have no need to suppress the people ever. Weapons in the hands of those same people are used to fight those abroad who try to take away their achievements.”

From inside the capitalist beast, we must continue resolutely to fight in the battle of ideas. Defend Cuba! Defend socialism!