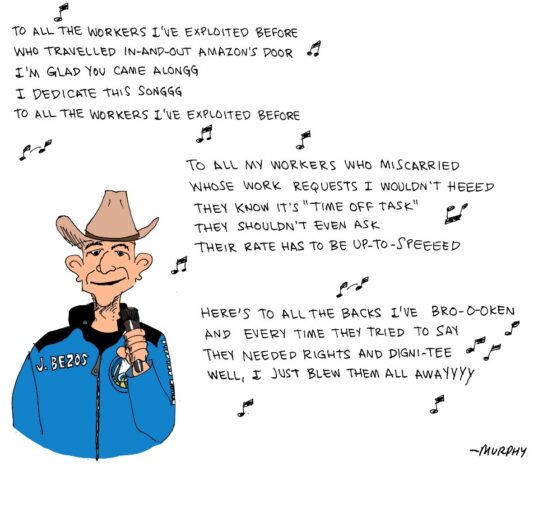 One thing is clear: None of these billionaires did any of the work that got them into space. All the labor to build their capsules, rocket launchers, launchpads and more was done by workers, whose labor these billionaires exploited.

These same billionaires’ earthly fortunes came from superexploiting workers in their factories, sweatshops and warehouses. They managed to pay little to no taxes to support public services. Nothing of benefit to humankind will come from this.

On the contrary, the success of these personal space launches threatens to send vast amounts of waste into space, increase the potential for mining on the moon and open the door for greater militarization of space. And these launches generate increased pollution during a time of severe climate crisis.

Only the very rich could afford seats on these flights. Bezos raised millions in a lottery where 7,600 people participated to win a seat in his capsule. The winner paid $28 million. The lottery gives Bezos a list of prospective customers for future flights. His company, Blue Origin, has already amassed $100 million in private sales for more trips.

Branson, whose Virgin Galactic spacecraft beat Bezos by nine days to be the first civilian space launch, charged less at $200,000 per seat. Yet none of the wealth generated by these projects will benefit their workers through increased wages or benefits.

In a move that angered millions of people, Bezos bluntly told the truth at a news conference after his multimillion-dollar joyride: “I want to thank every Amazon employee and every Amazon customer, because you guys paid for all this.”

Already aware of how Bezos has enriched himself by exploiting their labor, many of Bezos’ employees at Amazon have recently been organizing for a union. They know they are paid much less than the value they produce. And the work is harmful.

A recent investigation by the Strategic Organizing Center found Amazon’s serious injury rate was twice the warehouse industry average. (cbsnews.com, June 2) Pregnant workers have miscarried after being refused leave by the company. Many struggle to get workers’ compensation when injured. (Reveal News, Sept. 29, 2020)

Stuart Appelbaum, president of the Retail, Wholesale and Department Store Union that tried to unionize Amazon’s warehouse in Bessemer, Ala., responded to Bezos’ comments: “These are people who put their lives on the line during the pandemic and did not receive adequate support from Jeff Bezos. In the middle of the pandemic, he even cut people’s wages, when he didn’t need to. People are being forced to work in conditions where their health and safety is not being adequately protected. There is so much more Jeff Bezos should be doing for his employees.” (Democracy Now!, July 22)

Many question how someone who gained tens of billions of dollars in personal wealth during the pandemic, who lied to prevent his workers from unionizing, could joke about exploiting his workers to pay for private space trips for billionaires. Their advantage arises because by promoting “space tourism,” these billionaires are counting on access to military contracts — public money — to fund their future initiatives.

Corporations pay lobbyists and back politicians who pitch the falsehood that private companies run public agencies better than the government can. This argument has virtually shut down NASA and nearly dismantled the U.S. Postal Service — the oldest public entity in the U.S. Many privately owned utility systems, transportation services and former public schools have failed to deliver better products or services — but they have made many capitalists richer at public expense.

Like Musk’s SpaceX, which won a $149 million contract from the Pentagon to build missile-tracking systems, these private companies rely heavily on public funding. Many have billions in contracts from NASA, the military and telecommunications. The contracts let SpaceX and Bezos’ Blue Origin control the infrastructure of space. (Democracy Now!, July 22)

China is the target

U.S. corporations and politicians alike worry that China’s technological innovations will give it the competitive edge in space. China’s new Tiangong space station received its first three astronauts June 17 — a major milestone in the country’s rapid scientific and technological development. By contrast, the International Space Station, launched in 1998, will be decommissioned in the coming years, likely making Tiangong humanity’s only permanent outpost in space.

U.S. corporate management aims to overcome Chinese gains by using militarization to win funding and space-related contracts. Space privatization through companies like SpaceX and Blue Origin, heavily reliant on public contracts and built with billions of public dollars, may appear to be the solution. Clearly the billionaire owners of these companies are aware of this.