Coal miners on strike in Brookwood, Ala., are staying stalwart midway through their fourth month on the picket line — 24 hours a day, seven days a week — continuing a 100-year-old tradition of labor resistance in central Alabama.

The miners of United Mine Workers Local 2245 say big hedge funds that provide financial backing to Warrior Met are blocking progress toward a fair contract. The coal company is “the leading dedicated U.S.-based producer and exporter of high quality metallurgical (‘met’) coal for the global steel industry.” (Business Wire, Feb. 24) 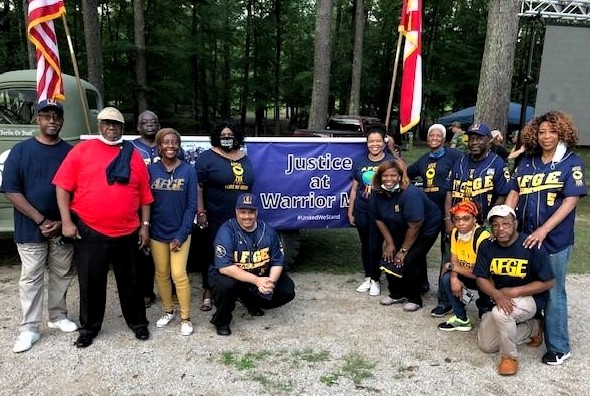 On July 28 the miners and their families plan to return to New York to protest again at BlackRock. They are asking supporters to join them from 9 a.m. to 12 p.m. EDT.

The 1,100 UMWA miners overwhelmingly voted down an unjust contract offered by Warrior Met Coal and walked out on April 1.

In 2016 the miners accepted a drastic $6-an-hour cut and sacrificed health benefits to bring the company out of bankruptcy. Management promised the cuts would be restored once the business was solvent. In a 2020 end-of-year statement, Walt Scheller, CEO of Warrior, said the business was back in good shape — but the company has offered the miners a contract with only a $1.50 an hour increase and kept in place unfair disciplinary and firing policies.

The miners labor in one of the world’s most life-threatening workplaces. The Brookwood mines are sunk 1,400 to 2,100 feet underground — some of the deepest vertical-shaft coal mines in North America. In 2001 methane gas explosions and a cave-in at one of the mines killed 13 workers, including a former high school classmate of this writer.

Meanwhile, Larry Fink, CEO of BlackRock, said this on July 14 about the chances of working people to stop work and retire: “People are going to have to, unfortunately, whether they like it or not, they may have to work longer because they’re not earning the same returns on their savings.” (CNBC, cnb.cx/3rhIklS)

At Warrior Met mines, backed by predatory BlackRock, the idea of savings surely must seem like a capitalist pipe dream to the workers. Alabama miners are just trying to survive with their lives, limbs and maybe a little breathing room every month. As for “planning” for retirement, savings are hardly possible on their diminished wages, unless the miners work underground 60 hours a week at deadly risk.

UMWA Local 2245 workers are asking all supporters of working people to come to an Aug. 4 support rally in Alabama. Planned with labor leaders and members coming from across the country, the aim is for the rally to be one of the largest labor rallies Alabama has seen in quite some time.

For information on how to support the strike materially, go to Twitter @UMWAStrikePantry. For details on support rallies and protests, go to @LaborReporters, Valley Labor Report, Alabama’s only union radio show.