Hundreds die from heat exhaustion in the U.S. Northwest and British Columbia. Unprecedented heat waves hit northern Norway and Siberia. Now, unheard of flooding in Western Europe has killed hundreds of people in Germany and Belgium. This led even the New York Times to publish a lead news article in the July 18 edition with the headline: “Climate change comes for the wealthy [read imperialist] nations.” The following spot-on article by anti-imperialist publisher Michel Collon exposes the insidious role of 21st-century capitalism in the climate crisis faced by humanity. (see Investigaction.net) 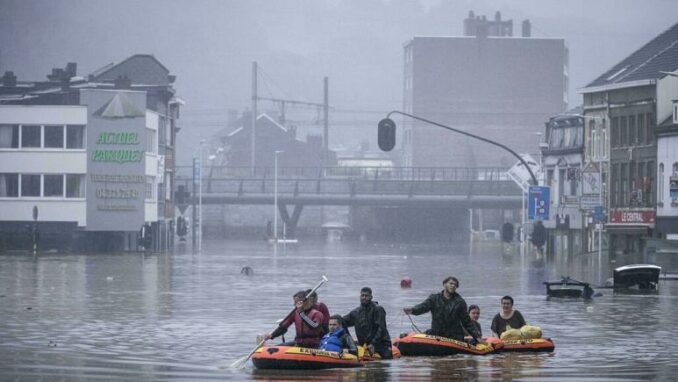 People use rubber rafts in floodwaters after the Meuse River broke its banks during heavy flooding in Liege, Belgium

I was in Liege, Belgium, where I spent three days near my daughter. Fortunately, she lives in the hills, but many of her friends and colleagues live near the now-flooded Meuse River. Those three days were filled with intense emotions, as we anxiously followed messages and networks offering comfort and a helping hand.

“Unpredictable fate,” say our officials. Wrong. As early as 1990, the U.N. International Panel on Climate Change announced a quadrupling of heat waves and “extreme precipitation.” What has been done since to prepare for this?

Baby steps are taken to curb corporate pollution. Precious forests continue to be cut down. We continue to expand trucking, instead of promoting rail and river transportation. Nothing is done to create protective flood zones — nothing to reinforce the absorption of rain by the soil.

The north of the country has solemnly proclaimed a “concrete stop,” but never has so much been built, including on agricultural land. It is instead a “concrete flop.” And very few protective measures are taken in the areas we knew were at risk.

“We have plenty of time.” Really? Let our officials dare go and tell the victims. Worse: the Belgian government has dismantled the Civil Protection responsible for disaster relief. Belgium once had six barracks; only two are left, and the staff has been reduced. These heroic rescuers have saved lives, but the lack of human resources, and sometimes of equipment, has not allowed more to be saved.

Belgium’s Deputy Prime Minister Jan Jambon, who imposed this reform, and former Prime Minister Charles Michel, now President of the European Council, have literally killed people. Last year, the same neoliberal rage against public services cost the lives of many patients. Their COVID could not be treated because our various governments had cut tens of thousands of hospital beds. (France and Belgium lost 110,000 beds under former presidents Charles Michel, Nicholas Sarkozy, François Hollande and Emmanuel Macron.)

“This is not the time for controversy,” wrote the daily Le Soir on July 18. But of course it’s time to ask the essential question: “Could we have greatly reduced the number of victims?” It is indeed the moment to reiterate that, faced with COVID, some countries have done a hundred times better than us in terms of victims, thanks to a set of radical and energetic measures placing the protection of lives at the center of their agendas from the first day of the alert.

Among these measures, social teams went from house to house to train in protective measures, to detect cases, to assist the most fragile and thus limit the spread. During the recent floods, such teams could have saved many lives by going from house to house as soon as the alert was given July 14, to identify the most vulnerable people and protect or evacuate them! Is one of the richest countries in the world incapable of providing a real social protection service to its elderly and disabled?

It is also a time to reflect on the remarkable French book, “Quand le dernier arbre aura été abattu, nous mangerons notre argent.” [“When the last tree has been felled, we will eat our money.”] Ludo De Witte demonstrates how the capitalist system, through its thirst for profit, leads to waste, to the plundering of resources, to the destruction of Nature and of our living conditions. Floods, viruses or other catastrophes: it is not Nature that is violent but this society that puts money above everything.

However, in this flood of suffering, a great ray of hope appeared: The admirable solidarity among the stricken inhabitants and in the whole region. The risky rescues, the donations of food, clothing and equipment, the offers of housing, the help in clearing the mud, the messages of sympathy. As in the first wave of COVID, the solidarity of ordinary citizens was magnificent and moving.

And so the people below deserve better leaders and, above all, a better economic system, where health and life prevail over the profits of a minority. Let’s not wait for the next catastrophe to impose change.