It is shocking to me that a 39-year-old woman cannot take out her own IUD if she so wishes. Or get in a car with her boyfriend. Or even choose the color of her kitchen cabinets!

This — while she makes millions of dollars in the entertainment business.

This is the case of Britney Spears, a well-known and popular performer who has been under a conservatorship (also known as guardianship) since 2008. 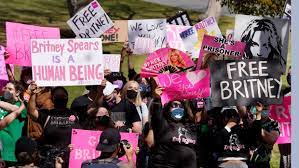 There is much support for Britney Spears from her fans.

While migrants are unjustly detained, while Black people continue to be killed by police, and when “essential workers” continue to be exploited in a pandemic, it is hard to be concerned about a wealthy white entertainer.

But that would be wrong.

The case of Britney Spears should be viewed as an opening on three fronts.

First, this case shows that men can still control women’s bodies. It can therefore be used as an opportunity to widen the struggle for cis and trans-women liberation.

Second, conservatorships are an archaic, unjust institution that repeatedly abuse the absolute right to dignity and power for many, including those who are disabled, the elderly and neurodivergent people.

Last, Spears’ case exposes that art under capitalism is a commodity, preventing the masses from enjoying the right to entertainment free or at low-cost. It also creates the conditions for abuse of those with a lot of talent.

Art is a human right, not a commodity.

In 2008, after Britney Spears had several perceived public meltdowns, her family, particularly her father, imposed a conservatorship, a control that has dictated her life for the past 13 years.

What does this mean?

As Ronan Farrow and Jia Tolentino detailed in the July 2 New Yorker magazine, a conservatorship is “a legal structure in which a person’s personal, economic and legal decision-making power is ceded to others. Called a guardianship in most states, the arrangement is intended for people who [allegedly] cannot take care of themselves.”

The article continues: “Since [her] . . . conservatorship, she has released four albums, headlined a global tour that grossed $131 million and performed for four years in a hit Las Vegas residency. Yet her conservators, who include her father Jamie Spears, have controlled her spending, communications and personal decisions.”

Why should we care about this woman whose net worth is valued at $60 million?  What does it matter to nurses so fatigued from the pandemic or to a mother who worries about how to put food on the table?

Spears comes from the working class. Britney’s family, originally from Louisiana, and particularly her father Jamie saw her potential to entertain, starting when she was around 4 years old. Her entire life since then has been manipulated to make money.

No one can fault a poor family for trying to uplift their lives like the Spears family did. But when the child is primarily treated as an ATM, when her rights to independence are taken away, it must be challenged.

Britney Spears, at 39 years old, has been completely infantilized. And that should make every woman very angry.

The situation is not just about kitchen cabinets. Spears has two children whom she is allowed to have with her only when the conservatorship lets her. She is not allowed to have a cell phone or have access to her social media.

As Elie Mystal, a Black journalist, pointed out: “California [has] many narcissistic male stars who have battled substance abuse, acted like rank fools . . . and exuded the mental stability of a nuclear fuel rod deprived of water. . . . I don’t see how Spears’s behavior . . . was any worse than what a lot of men in Hollywood do.” (The Nation, June 25)

In June, Britney Spears finally appealed to the courts to end the control over her life.

As reported in The Hill, this was the outcome: “Spears’s dad requested the conservatorship after a series of incidents in the wake of her separation from Kevin Federline. . . . Yet it remains unknown what conditions could possibly be so serious to compel the State of California to keep Britney in a conservatorship 13 years later. As recently as June 23 of this year, a judge rejected her plea . . . and sealed from public scrutiny the full court records that might shed light on the rationale for her ongoing legal subordination.” (July 8)

Under capitalism, art is a commodity, not a human right

Everyone should ask themselves why does an entertainer get paid so much money? Why is that work more valuable than, say, the important work of a teacher?

Goldman Sachs reports that the total value of the recording industry in 2020 was a whopping $21.6 billion! (Market Industry, June 14)

In some ways, Spears — worth $60 million — is poor compared to Andrew Lloyd Webber, composer and musical impresario, whose net worth is $1.28 billion!

When art can be sold to line the coffers of the bankers and money vultures, then it becomes not a talent appreciated by the masses, but a commodity, a product that can be bought and sold, like cell phones.

In socialist Cuba, art is not a commodity. The country’s world-renowned ballet dancers and singers are enjoyed by the people free of charge or for a few cents.

Jamie Spears turned his daughter into a commodity. But he is only a small cog in a lucrative industry, one that produces absurdities like paparazzi.

According to Celebuzz, a picture of Britney Spears was sold for $500,000. No wonder desperate photographers swarm around her like vultures. Years of this scrutiny led to what were deemed as “unstable” actions, including chopping all her hair off, which became a factor leading to the conservatorship.

If every young adult was put under conservatorship for rebelling, there would be too many to count.

All the while that Jamie Spears controlled her visits to her children, her work was bankrolling his lavish lifestyle. At one point, in a rage, as reported by a family friend, her father declared “I am Britney Spears!” Every time a housekeeper was protective and caring toward Britney, he fired them, according to Farrow and Tolentino.

In fact, Jamie Spears used over $2 million of Britney’s money to defend himself in the conservatorship. (People Magazine, July 9)

What Britney’s father has done to his daughter is thoroughly patriarchal.

But what the state has done in continuing to approve this conservatorship is far worse. This case, which became public because of activists, especially LGBTQ people who launched the #FreeBritney Movement, had much more at stake than the rights of Britney Spears.

Fight for the rights of neurodivergent people

The U.S. has a long, sordid and sinister history of legal, forced sterilization, especially of people of color. Women who have Down’s syndrome have often been denied the right to reproduce, which smacks of eugenics and fascism.

The government also abuses the rights of neurodivergent people. It does not prioritize the provision of mental health care, but prefers the masses to be mentally unhealthy, as a form of exercising state control. Capitalism causes stress, yet offers no help.

Spears’ conservatorship opens up the conversation about those who have lost control over their lives over the slightest whim of those who are allowed to control them.

The ACLU issued a statement June 25, in which authors Zoe Brennan-Krohn and Rebecca McCray wrote: “Spears’ experience is part of a long history of people with disabilities. . . . Thanks to Spears’ large platform . . . her demands to be freed . . . have been heard. But there are untold thousands of people living under this same type of restrictive structure, who have lost their rights to reproductive freedom, often permanently.”

Britney Spears’ case is an opportunity to open a wider discussion about the lack of rights for the oppressed. Let us hope that other entertainers will arise and come to #FreeBritney to help widen this discussion.

In 2017, Britney Spears called for the passage of the Dream Act (Deferred Action for Childhood Arrivals). In response to the COVID crisis last year, she somewhat called for the redistribution of wealth and for a strike. (Jacobin, March 25, 2020)

As a result, many memes developed showing pictures of her with Karl Marx. Maybe that was the final straw for her conservators.