The struggle for the bourgeois democratic right to one person, one vote still continues in the U.S., the most powerful imperialist country. That struggle began once the last enslaved person was freed in Galveston, Texas, June 19, 1865, known as Juneteenth.

During the next 10 years that defined Black Reconstruction, thousands of Black men gained the right to vote, resulting in their political representation for the first time in Southern state legislatures, especially in Louisiana, South Carolina and Mississippi, under the guardianship of the armed federal troops.

This right and other important gains during this radical period were tragically short-lived when federal troops were withdrawn under the Rutherford B. Hayes presidency. This allowed the former Confederacy to regroup in the form of the Ku Klux Klan and White Citizens Councils, accompanied by the passage of oppressive semislavery laws used to terrorize the Black population.

Women, excluding many women of color, won the official right to vote in 1920, due to the efforts of the suffragist movement.

From the late 1880s until the mid-1960s, apartheid-like Jim Crow ruled the Deep South, until the massive Civil Rights Movement, through blood, sweat and tears, forced the Lyndon B. Johnson administration to pass the Voting Rights Act in 1965 — 150 years after the struggle to vote was first launched. 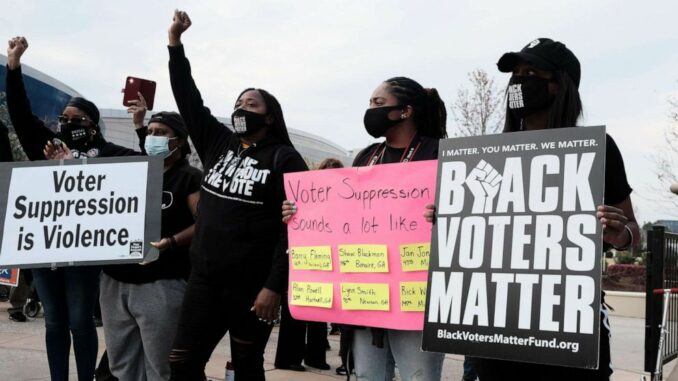 Today, in 2021, this Act is being weakened in 43 states with more than 250 bills introduced by Republicans in state houses to limit mail-in, early in-person and Election Day voting. Other constraints include stricter ID requirements, limited hours and narrower eligibility to vote absentee. Georgia has already passed a bill prohibiting mail voting altogether. These bills take vengeful, racist aim at mainly Black people whose votes were decisive in the defeat of Trump during the 2020 elections.

There has been an internal struggle within the Texas Legislature between right-wing Republicans and mainly African American and Latinx Democrats over these repressive measures. In fact, a delegation of these Democrats left Texas in an effort to stall the vote. They plan to hold a weeklong virtual press conference beginning July 19 with support from the Service Employees International Union and Mi Familia Vota, which promotes Latinx voting rights.

Republicans have threatened to have their Democratic counterparts arrested upon their return to the state.

These repressive bills are now being debated in 43 out of 50 states in the U.S. That begs this question: Why haven’t the Democrats called for a national demonstration to defend the right to vote, since their main social base is Black, Latinx and other disenfranchised sectors of society?

Even with the pandemic still a factor, the unions — upon which the Democrats rely for votes — could still mobilize thousands of workers to come to Washington, D.C., to occupy the capital if need be. This could push back every one of the repressive bills, which are a real threat to the 1965 federal act being overturned.

What organized worker and even many of those unorganized would not want to take action to either defend or fight for this right? The Rochester Labor Council passed a resolution Oct. 8, 2020, supporting a general strike if Trump had refused to leave office; other labor councils followed suit. Why not revisit the need for labor to organize general strikes to defend voting rights, not just for Black people but for migrants, the incarcerated, those with disabilities, and youth?

The fact that such actions encouraging direct intervention from the workers, especially the most oppressed, haven’t been called yet exposes once again the anti-worker, pro-bourgeois character of the Democratic Party, which seeks to keep the masses under its thumb and rendered powerless.

This is another example why workers assemblies can be an important organizing tool — to help empower workers to become independent from the Democratic Party and to help pave the way for complete liberation from the profit-driven capitalist system and their parties.