The United States began its military occupation of Haiti over a century ago, sending an armed force ashore on July 28, 1915, just south of Port-au-Prince. Somewhat earlier, a raiding party of U.S. Marines stole Haiti’s gold reserve of about $500,000 and turned it over to First National City Bank in New York — now Citibank. 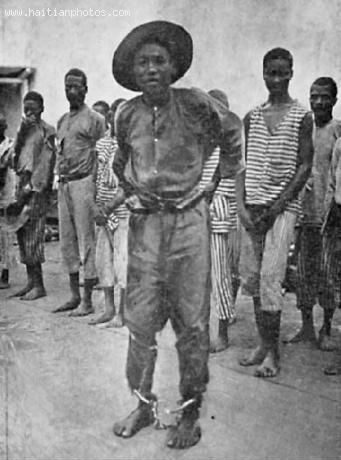 One of the cacos, armed peasant guerillas who revolted against U.S. occupation of Haiti from 1915 through 1921.

Haitians — on the island and in its diaspora — have been fighting for over 200 years to resist forces of colonizing enslavement, imperialist racism and capitalist exploitation.

Historical background to the occupation

Haiti was the second country in the Western Hemisphere to gain its independence. After a hard-fought, 12-year-long struggle against France ended in 1804, slavery was eradicated and the slave owners expelled from the country.

The U.S. had sent its first foreign aid ever — $750,000 worth of food and arms — to the slave owners in Haiti to put down the revolt. At that time, $750,000 was big money. The U.S. Constitution enshrined slavery, and U.S. leaders held up Greece and Rome, whose economies and societies depended on slavery, as models for the state they were building.

In the 19th century, U.S. owners of enslaved people were extremely worried that Haiti’s example might be contagious. And 10,000 white owners and families fled from Haiti to the U.S. where enslavement was still legal; mainstream coverage of the revolution was extensive.

The U.S. didn’t recognize Haiti as an independent country for 60 years, actively working to keep Haiti diplomatically and economically isolated.

Haiti’s “original sin,” in the opinion of many Haitian historians and activists, was becoming the only country to have had a successful slave revolution.

Opposition in both Haiti and U.S.

Justifications for the 1915 U.S. occupation, which lasted until 1934, were filled with lies and outright falsehoods. President Woodrow Wilson openly declared its purpose was to “establish peace and good order” and “has nothing to do with any diplomatic negotiations.” But his orders to the admiral running the military operation involved changing Haitian law to protect U.S. and other foreign interests.

The U.S. invoked the Monroe Doctrine [the foreign policy that the Western Hemisphere “belonged” to the U.S.], to justify its violation of Haitian sovereignty and forced the Haitian Parliament to agree to a 10-year treaty that made Haiti a U.S. political and financial protectorate.

The occupying Marine forces came from the U.S. South, where anti-Haitian sentiment and racism were at high levels. The Marines forced Haitian peasants, the vast majority of the population at that time, into work gangs to build roads, bridges and dams.

Their treatment was so rotten that it provided the impetus for a revolt of the cacos, armed peasant guerrillas, under the leadership of Charlemagne Péralte and Benoît Battraville. This revolt lasted, even after the execution of Péralte and Battraville, until 1921. After the end of the armed resistance, popular opposition, sparked by nationalist students and by the formation of the Haitian Communist Party under Jacques Roumain, intensified until the U.S. finally withdrew its troops in 1934.

The first opposition to the U.S. invasion came from the Black community in the U.S. and was part of the NAACP’s international work. According to Mary Renda’s book “Taking Haiti,” the U.S. Communist Party, mainly working through allied groups, played a prominent part in organizing this opposition. The occupation of Haiti and of the Dominican Republic were issues in the U.S. presidential campaigns of the 1920s.

The withdrawal of the U.S. Marines didn’t really end U.S. control over Haiti. The National Guard, which became the Haitian army, was formed and trained by the Pentagon. It supported the reign of the oppressive Presidents Duvalier, father and son [François and Jean-Claude, respectively], from 1957 to 1986. It then sponsored, maneuvered and supported various military regimes until the elections that brought Jean-Bertrand Aristide into the presidency in 1991. [Aristide, a proponent of liberation theology, was Haiti’s first democratically elected president.] The U.S. supported and helped organize two coups that finally forced him from office in 2004, through kidnapping and exile.

From 2004 [to 2017], a United Nations military force called Minustah occupied Haiti, functioning as a veil for U.S. troops, which could be quickly sent in if Washington felt it necessary. For example, 25,000 U.S. troops arrived a few days after the earthquake of 2010 wiped out the U.N. command.

Beyond exercising military and political rule over Haiti, U.S. rulers want to humiliate it, pretending it can’t run its own affairs without outside assistance, and discount and deprecate its culture.

The Haitian progressive movement has organized protests of 100,000 people or more in Port-au-Prince and nationwide, even though most Haitians live without reliable electricity or telephone service. They can certainly organize themselves.

For more information, see the book “Haiti: A Slave Revolution,” which can be read online at https://iacenter.org/wp-content/uploads/Hait-Book.pdf