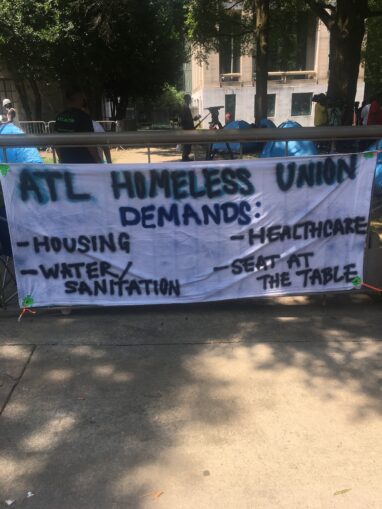 On the evening of July 4, the federal holiday known as Independence Day, an encampment of 15 or more tents was set up on the tree-shaded lawn of City Hall.

This was the first public act of the newly formed ATL Homeless Union. A press release widely circulated on social media expressed the frustration and pain of the thousands of people who have been forced to live on the streets of the “city too busy to hate.”

The statement demanded the end of superficial “band aid” measures by successive city administrations that have failed to provide safe housing for all those in need.

Initiated by Diesel, a disabled homeless man, the four main demands of the Union resonated with unsheltered people, several who happened upon the tents that night while searching for a safe place to lie down. A banner stretched across a barricade on the City Hall property read “ATL Homeless Union Demands: Housing, Health care, Water/Sanitation and a Seat at the Table.”

On July 5, with City Hall closed for the holiday, Atlanta City police gave a series of announcements declaring everyone would be arrested if they didn’t leave the area.

A support group kept serving food and water to encampment members, as more and more homeless people were drawn to the scene.

The number of police kept growing until there were at least 50-60 Atlanta police and Fulton County sheriffs with multiple cars and prisoner vans. All at once, police grabbed and dragged people who were in one of the tents to the awaiting vehicles. Six people were charged with trespass on public property.

The Union then reassembled its encampment on the grounds of the Shrine of the Immaculate Conception, a block from City Hall.