By the Kamakakūokalani Center for Hawaiian Studies 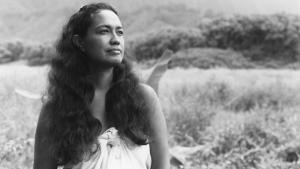 Hawaiian leader Haunani-Kay Trask died July 3. She is best known for her 1993 collection of essays, “From a Native Daughter: Colonialism and Sovereignty in Hawaii.” In her 1996 essay, “Feminism and Indigenous Hawaiian Nationalism,” Dr. Trask said that she understood “how capitalism and racism sustained each other, how the world of hatred the haole had made in the United States originated in the colonial period when the Native American tribes suffered an onslaught of genocide under the ‘freedom-loving’ presidents Washington, Jefferson and the rest.” The following excerpted statement was made through the Kamakakūokalani Center for Hawaiian Studies at the University of Hawaii at Mānoa, which she founded.

It is with a heavy heart that we share the news of Dr. Haunani-Kay Trask’s passing. Dr. Trask was a visionary leader of the Hawaiian sovereignty movement. She inspired critical thinking and made important contributions in areas of settler colonialism and Indigenous self-determination. More importantly, she was a bold, fearless and vocal leader that our Lāhui needed in a critical time when Hawaiian political consciousness needed to be nurtured.

Professor Trask was a fearless advocate for the Kānaka Maoli (Native Hawaiians) and inspired our people everywhere to embrace their ancestry and identity as Hawaiians and to fight for the restoration of our nation. She gave everything she had as a person to our Lāhui; and her voice, her writing and her unrelenting passion for justice will, like our Queen, always represent our people.

Our center mourns her passing and sends our aloha and to the Trask ʿohana. E ola mau loa e Haunani-Kay Trask, ʻaumakua of the poet warrior.