Roberto David Castillo Mejía, accused by prosecutors of “masterminding” the assassination of beloved Honduran environmentalist and Indigenous leader Berta Cáceres, was found guilty of homicide July 5 by a three-judge panel. 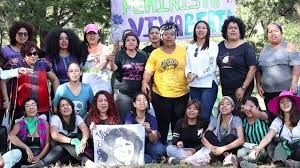 Feminist Encampment Viva Berta, set up and maintained during the trial of Roberto David Castillo Mejía, who was found guilty of homicide in the assassination of Berta Cáceres. Credit: COPINH

Cáceres was the leader of the Civic Council of Popular and Indigenous Organizations of Honduras (COPINH). At the time of her killing, March 3, 2016, COPINH was resisting the Agua Zarca hydroelectric dam project on the Galcarque River, a major source of drinking water and a sacred waterway for the Indigenous Lenca people.

Castillo Mejía was the manager of the DESA corporation and was supervising the dam’s construction.

In 2018, seven paid hit men were found guilty of fatally shooting Cáceres and wounding a Mexican supporter of COPINH. A mountain of evidence presented in Castillo Mejía’s trial proved that he arranged the assassination and paid off the hit men. Analogous to the conviction of George Floyd’s killer Derek Chauvin, the verdict in this trial represented for COPINH “a step toward breaking the impunity pact.” (copinh.org)

Since the U.S.-backed coup against democratically elected President Manuel “Mel” Zelaya in 2009, impunity has been the rule not the exception for those who torture and murder popular leaders. Many people involved in assassinations, including Castillo Mejía, received training in the U.S. — often at the despised School of the Americas.

The chain of command in Cáceres’ murder goes higher than Castillo Mejía. A statement jointly issued by COPINH, and the mother and children of Cáceres states: “We reaffirm that the Berta Cáceres Justice Cause [campaign] in Honduras does not end with this resolution but is firmly aimed at bringing to justice the intellectual authors of this crime: Daniel Atala Midence, José Eduardo Atala, Pedro Atala and Jacobo Atala and other persons and institutions involved.”

FICOHSA, the finance capital behind the Agua Zarca project. “It’s them or us,” DESA board member Pedro Atala Zablah reportedly said in October 2015, referring to COPINH. No member of the family has been charged in Cáceres’ killing.

The bank has hired former House Rep. Alan Wheat to lobby against the Berta Cáceres Human Rights in Honduras Act in the U.S. Congress. The Act would suspend funding of Honduran police and military, “until such time as human rights violations by Honduran state security forces cease and their perpetrators are brought to justice.”

This writer had the privilege of meeting Berta Cáceres in November 2013 in Honduras, while representing the International Action Center as a human rights observer during the presidential election — which was stolen by the U.S.-supported right-wing candidate, Juan Orlando Hernández. In the time leading up to the meeting with U.S. solidarity activists, Cáceres had been incognito due to death threats and an arrest warrant against her.

Cáceres explained how the Lenca were being evicted from their own ancestral lands to give transnational corporations “concessions” to own rivers and exploit resources including gold, iron, platinum and silver. Their territory has been “militarized” by the coup regime and the U.S. military, which has built bases inside  the Lenca region.

Cáceres told us that the Lenca today have “inherited an entire history of rebellion against colonialism” and are now “in a life-and-death struggle.”

The leader of COPINH spoke passionately and poetically against capitalism for its “perverse notion of giving nature a dollar amount.”

In 2015 Cáceres was the recipient of the Goldman Environmental Prize. The struggle begun by her and COPINH continues under the leadership of her daughters Bertha and Laura Zúñiga Cáceres.

Throughout the three-month trial of Castillo, thousands of Hondurans demonstrated outside demanding justice, while a “Campamento Feminista Viva Berta” kept up an encampment until the judges handed down the verdict.

“We have been sustaining food, the different ways of being and relating, the effort to stay day and night, saying that Berta is multiplied in our lives and that this is also justice for her,” the Campamento said in its final statement. Since the 2016 assassination, a popular saying has been “Berta did not die, she multiplied.”

The verdict was achieved, the statement added, because of the Honduran Resistance “taking out that trial full of racism, classism and misogyny . . . from the Supreme Court of Justice building, to the street, to the square that we have occupied for 90 days today to talk about the movements, the injustice, the struggles, the desire to change this country.” (copinh.org)

Laura Zúñiga Cáceres, Berta’s youngest daughter and the only family member allowed inside court, stated: “This is a collective victory, and my message to other communities in similar situations is this: The fight is hard, but in the end, as my mom said, that we are going to triumph, and we are going to dismantle the violence against our people.” (The Guardian, July 5)