The reactionary, conservative response to AIDS post-1981 was to immediately blame and further condemn gays and lesbians, and later all LGBTQ+ people. 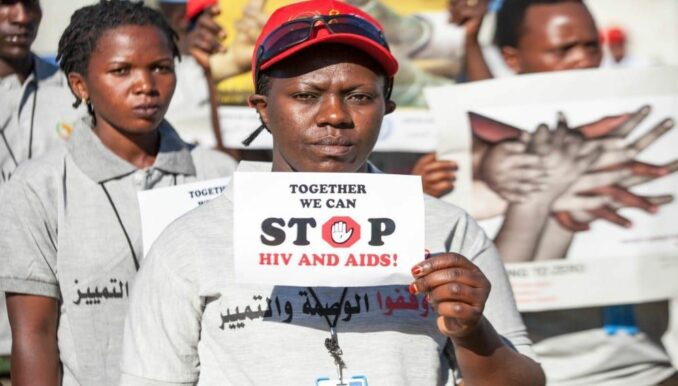 HIV was initially referred to as “GRID” — Gay-Related Immune Deficiency. Although quickly changed, that smear on the LGBTQ+ community left a lasting mark. Today LGBTQ+ people are still having to prove that AIDS is not a “gay disease.”

Though evidence was overwhelming that HIV/AIDS is not specifically related to sexual identity, the reactionary right would not hear of it. This included many in the U.S. government. It was only in 2020, in the midst of the COVID-19 pandemic, that the Federal Drug Administration “relaxed” its restriction on gay men donating blood. Now they are allowed to give blood, if they have refrained from sex for three months prior. This prejudicial ban, rooted in sheer ignorance and discrimination, lasted over 30 years. (bit.ly/2SM5WCe)

But HIV/AIDS did not originate in the LGBTQ+ community in 1981. Before 1981, AIDS had been affecting colonized and nationally oppressed people for over 60 years. Scientists have presented concrete evidence that HIV originated in around 1920 in Léopoldville (later Kinshasa), Belgian Congo, due to mutation and adaptation of a virus found in chimpanzees. Known as Simian Immunodeficiency Virus, it was transferred to humans through human hunting and consumption of those animals. (bit.ly/2UFdHKI)

In 1998, at the 5th Conference on Retroviruses and Opportunistic Infections, scientists revealed that the first-known case of HIV in a human was found in a plasma sample from a man who lived in Léopoldville in 1959. (bit.ly/2UJFutv)

From 1885 until it won independence in 1960, the present Democratic Republic of Congo was a colony under Belgium monarchs and then its state. The peoples appropriated along with their land suffered almost unimaginable horrors, especially under King Leopold II. At the 1885 “Scramble for Africa” Berlin Conference, European leaders granted Leopold his own private colony. His “Congo Free State” was run as a private enterprise with the labor of African peoples held captive and coerced by torture and mass murder. It is thought that as many as 10 million people may have died there from murder, famine and disease under this colonial rule.

Taken over by the Belgian state in 1908, the Congo, its people and its resources of rubber, ivory and minerals continued to be brutally exploited under burgeoning capitalism. The Belgian Congo’s new infrastructure relied heavily on railroads. From 1920 to 1932, over 1,500 miles of railroads were built in the country, all on the backs of Congolese people and migrant labor. Léopoldville, the capital of the Congo, was a central point of the Belgian-controlled railroad, with many white Belgian men moving to the city to capitalize on its industry.

Alongside the railroad industry, the Belgian colonizers expropriated wealth in the various other forms. In a 1960 article in this newspaper, Workers World Party founder Vince Copeland expanded on the role of the white Belgian colonizers:

“As a matter of fact, the white people that were in the Congo were not working people at all. They were the overseers for the real slave masters back home in Belgium.

“They were the middle-class representatives of upper-class capitalism. They were the higher-paid clerks, the engineers, the petty bosses, the merchants and technicians — most of them armed with pistols and whips — some of them weighted with a guilty conscience.” (bit.ly/3wqcmEW)

As these industries grew, lining the pockets of the Belgian bourgeoisie while draining everything the Congolese workers had, another industry flourished: sex work. White Belgians, mostly men, traveling to the Congo, settled largely in Léopoldville, where the sex-work industry was centralized. Due to the lack of proper health care, medicine and hygiene, diseases in this area were very common. Under these circumstances, the earliest form of HIV developed through mutation and transferral from the Simian Immunodeficiency Virus.

The virus could have been contained at this point, but due to the rapid expansion of imperialist plundering of the Congo, relying on the railroad industry, the white Belgian colonizers traveled around and left the country, unknowingly infected. This resulted in a rapid transmission across countries and even continents, although the exact dates of when the virus began to spread worldwide are currently unknown.

By 1975, doctors at the Mamo Yemo Hospital in Kinshasa reported a doubling of cases of Kaposi’s Sarcoma; and retroactive tests performed later indicate that by 1980, 3% of pregnant people in Kinshasa had HIV/AIDS. (“The coming plague: newly emerging diseases in a world out of balance,” Laurie Garrett, 1994)

To the east of the Congo lies Burundi. Formerly part of colonized German East Africa, the area that later became Burundi was handed over to Belgium in the 1919 Treaty of Versailles, which carved up Africa among European nations. Belgium occupied this land as they had the Belgian Congo. This colonialist occupation lasted from 1918 to 1962, when Burundi declared independence. But the damage from decades of colonialist and imperialist plundering had taken its toll.

The Belgian occupation of the Congo and Burundi opened up a high amount of HIV/AIDS transmission as the colonization of the two countries led to depleted health and medical resources for the residents of both countries.

After the HIV/AIDS epidemic became known worldwide, a retrospective study was done on 658 blood specimens in a study on hemorrhagic fever in Burundi. It was concluded that HIV/AIDS had not only spread to Burundi by 1981, but that the country was experiencing a HIV/AIDS epidemic in 1980 — one year before the CDC or any bourgeois media reported on HIV/AIDS. In the capital city of Bujumbura, the prevalence rate of HIV/AIDS by 1980 was 7.6%. (bit.ly/3yxXjKL)

In 1969, Robert Rayford, a Black teenager in St. Louis, Mo., died of what doctors then deemed a “mysterious illness,” although they associated it with Kaposi’s Sarcoma, which was later associated with HIV/AIDS. Samples of Rayford’s tissue were collected after his death and frozen for almost 20 years. In 1987, the samples were analyzed and tested positive for HIV/AIDS, retroactively making Rayford the first person in the U.S. known to die of AIDS. (bit.ly/3k0aNLr) Over a span of four decades, AIDS had spread worldwide — with not one person knowing what it was or just how deadly it had become.

Additionally, there are countless stories of people, largely in LGBTQ+ communities, who contracted or even died of HIV/AIDS in the 1970s. These stories are not well-documented, because of prejudice and the resulting lack of information surrounding the disease. Many who survived this plague and look back on it, however, often conclude that a friend, family member or lover who died sometime between the 1970s and 1981 from what was then a “mysterious illness,” actually died of AIDS.

The peoples of Africa deserve colossal reparations due to the centuries-long plundering — by Europe, the U.S. and NATO-backed capitalist forces — of African lands, resources and the labor and the very lives of its peoples. It is imperative that full reparations be paid for these colonial, neocolonial and imperialist crimes against humanity — including for the medical crises and plagues, like HIV/AIDS, that arose under this exploitation. These disgusting crimes — committed by capitalism and imperialism — must be put to death by socialism.

Part 3 will focus on the early years of the HIV/AIDS epidemic, the refusal of the Reagan administration to acknowledge it and early movement resistance to the plague.

Devin Cole is a transgender Marxist organizer and writer. They are the president of Strive (Socialist Trans Initiative), a transgender advocacy organization in northwest Florida, and a member of the Workers World Party — Central Gulf Coast (Alabama, Florida, and Mississippi) branch.