Two preventable catastrophes caused by capitalist greed in housing construction occurred four years and thousands of miles apart, and in both cases the tragic loss of human life was horrendous. While Florida’s building collapse is affecting a more affluent grouping in the U.S., the earlier disaster at Grenfell Tower in England impacted a lower-income community, with a majority of people of color, many of them immigrants.

They have faced racism, anti-immigrant bigotry and reactionary politicians’ resistance in their quest for safety measures in housing and justice for those who died and survivors.

Both were avoidable human tragedies. 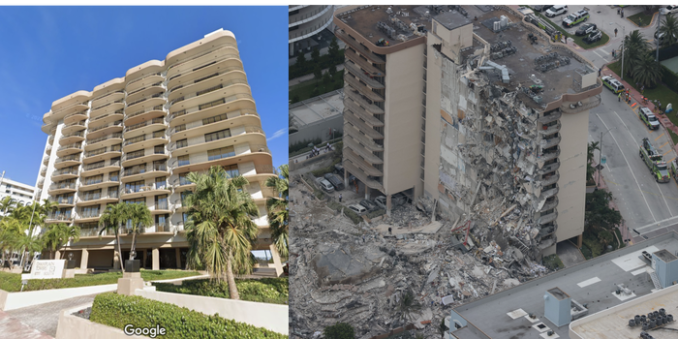 Florida building before and after collapse

It took 11 seconds for a catastrophe to occur in Surfside, Fla., near Miami. Half of the 12-story Champlain Tower South suddenly collapsed in the early hours of June 25, leaving 10 people dead and 151 missing under the rubble. Emergency rescue teams are working hard using heavy equipment, trying to find survivors.

But their intensive labor has not resulted in good news for the loved ones of the unaccounted for residents. Their losses are becoming a reality, as hope wanes for the missing.

Building residents include many people who emigrated from Latin America and their visitors. Young children, adults and seniors are missing. A Jewish community has also been impacted.

The day after the cave-in, Surfside city officials released documents written by engineers hired by the condominium association in 2018. They found “major structural damage” to the concrete slab below the pool deck and “abundant cracking and crumbling of the building’s columns, beams and walls of the parking garage under the building.” (New York Times, June 27)

Written recommendations for repairs were sent to condominium association officials Oct. 8, 2018. The engineers warned: “Failure to replace the [deteriorating] waterproofing in the near future will cause the extent of the concrete damage to expand exponentially.” (USA Today, June 27)

Yet, the consultants’ alarming report was not acted on before the disaster occurred. The estimated cost of repairs was $12 million.

A class action lawsuit has already been filed against the condominium association, alleging it was negligent and disregarded safety measures. It maintains the disaster was preventable. The legal action is seeking financial damages for all tower residents.

For years, there has been a boom in residential housing construction in Florida. And just as capital flows to where profits are greatest, it is also true that investors or realtors strive to hold down costs in order to increase earnings. In other words, much building is done on the cheap: cutting corners, using less costly materials and ignoring safety requirements.

June 14 was the fourth anniversary of a horrific fire that swept through Grenfell Tower in North Kensington in West London, killing 72 residents. The 24-story building housed workers and low-income families, many refugees and first- and second-generation immigrants. Those who died represented 19 nationalities, many from the Middle East and Africa.

They lived near the wealthiest area of London. This needless tragedy starkly revealed a “tale of two cities,” with working-class immigrants and other people of color living right next to opulent wealth, yet residing in faulty, cheaply made and potentially dangerous buildings.

A major cause of this inferno was the use of cheaper, more combustible cladding to envelope the building. This enabled the fire to spread quickly. There was only one escape route. There were no sprinklers, no regulations requiring fire-retardant cladding, and the nearby fire service had been hit by budget cuts. Before the disaster, residents had complained regularly about the lack of fire safety measures.

According to Justice4Grenfell, which memorializes the 72 victims of the conflagration: “Despite public outcry at the time and continuous campaigning from many groups, still no one has been held accountable for the disaster at Grenfell. Firms involved were granted immunity from prosecution if they gave evidence at the inquiry. More tower block fires have occurred since then, and even today up to 11 million people may live in properties with unsafe cladding.”

The organization emphasizes: “Phase 1 of the Grenfell Tower Inquiry made 46 recommendations, only for Tory MPs to vote down an amendment to implement them.”

Nabil Choucair, who lost six family members, said, “I fear that those responsible for the fire are going to get away with murder.”

The Grenfell survivors and their allies are still fighting for justice.