Wearing a graduation cap with rainbow colors and a militant fist, Bryce Dershem, valedictorian at Eastern Regional High School in Voorhees, N.J., began his June 17 commencement speech: “After I came out as queer freshman year, I felt so alone. I didn’t know who to turn to for support.” Voorhees is only 20 miles from Philadelphia, where there is a vibrant LGBTQ+ community. 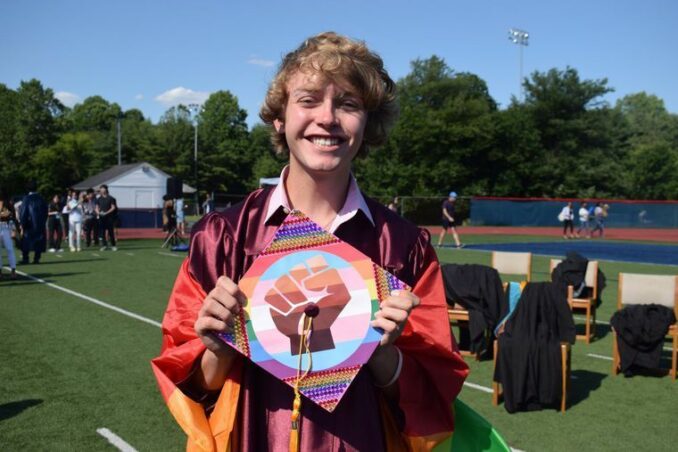 A video by Dershem’s father captured what happened next: Principal Robert Tull cuts off Dershem’s microphone, grabs his speech from the podium and crushes the pages. (tinyurl.com/ync2bvh7)

In the background, people are heard demanding “Let him speak!” According to the June 25 Philadelphia Inquirer, Tull then pointed to Derhsem’s preapproved speech, authorized by school administrators, and ordered: “You read this, or nothing else.”

That speech had no references to Dershem’s sexuality or mental health issues.

Having an inkling that he might be censored, Dershem had memorized his original seven-minute speech. When the sound was restored, he continued, “As I was saying,” to the cheers of his classmates and their parents in the audience of 2,000.

He continued to speak about his experience coming out, the ensuing mental health challenges and suicidal thoughts, and expressed support for other LGBTQ+ students and those suffering from mental health issues.

“I am a fighter, and today I’m a survivor. Part of our identity, our year, our struggle, is 2021,” Dershem said, referring to the COVID-19 crisis that impacted his graduating class. “We’re still here though. We adapted to something we never thought possible.”

His powerful message to other students was: “You are not alone in your fight. With the belief of those around you, you never have to suffer in silence. If you have struggled or will struggle, I believe you, and I hope you will believe others too.”

As he left the stage to audience cheers, Dershem wrapped a rainbow flag around his graduation gown, in repeated defiance of school administrators who forbid him to do so.

Dershem told the Inquirer he had attempted to work with administrators to deliver a speech that would address his personal experiences while offering a hopeful and inclusive message. Shortly before graduation he was told to remove all references to “queerness” and mental health issues.

In what may seem like reverse discrimination, school administrators told him any reference to LGBTQ+ issues would “exclude other people.” Dershem responded, “I don’t think it is exclusionary to say that one is queer.”

This young courageous valedictorian suggests that school officials can learn something from his stand. “Even though my family, my friends and so many amazing Eastern faculty believed in me, I needed to accept the unapologetic version of myself . . . for myself,” he said, regarding his fight to come to terms with his identity. “We all do.” (tinyurl.com/5uack5ps)