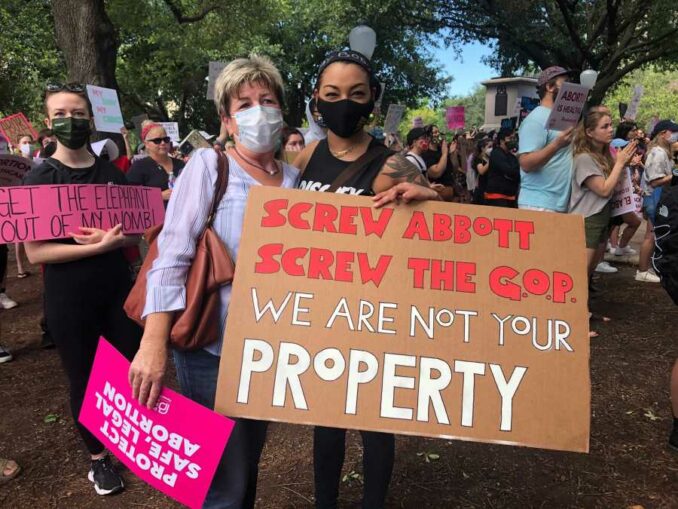 Pro-choice rally in Austin, Texas, May 29

By Gloria Rubac and Kathy Durkin

Gov. Gregg Abbott told the media May 19, “Our creator endowed us with the right to life,” as he signed the most restrictive anti-abortion bill in the country in Austin, Texas. Within eight hours, he okayed the racist legal lynching of Quintin Jones in Huntsville’s death chamber, proving that the “right to life” does not apply to all living people.

Nearly a dozen other states have passed draconian bills like Texas’, which limit abortions after six to eight weeks of pregnancy, with no exceptions for rape or incest victims. Texas’ law adds even more brutal restrictions. State government won’t enforce this law — but anyone in any U.S. state can sue a person who not only performs an abortion in Texas after six weeks of pregnancy, but anyone involved. And they don’t even have to know them!

Criminal charges can be brought against anyone working in a clinic, from doctors to receptionists: people who drive friends to a clinic; a rape crisis counselor who explains options to rape victims seeking to terminate a pregnancy; anyone who donates to or volunteers at an organizaiton which funds abortions, or even those who tell a friend the name of an abortion provider.

Legal experts comment that this is a clever law, because abortion providers can’t sue the state attorney general or other officials because they have no role in enforcing the law. Clinic operators, on the other hand, can be sued.

A demonstration in Austin May 29, drew 500 people who condemned the new law and the governor for signing it. One sign read, “You’re pro-life until the baby is poor, transgender, Black, gay, Mexican, Indigenous, disabled, sick, etc.” Another read, “Protect fetuses: ‘Ban fracking!’ and ‘Prevent pollution.’”

To cheers from classmates and staff, Paxton Smith, valedictorian at Lake Highlands High School near Dallas, defiantly tore up her preapproved valedictory speech at her graduation ceremony June 3. She bravely denounced this draconian law and emphasized, “We cannot stay silent!”

Amy Hagstrom Miller, CEO of Whole Woman’s Health, clinic operator in Texas, said: “They are determined to legislate abortion out of existence. We see firsthand that Black and Brown communities are hit the hardest by these oppressive laws, and we know these laws do not reflect the values Texans hold.” (reproductiverights.org, May 19)

Frontera Health, based in the Rio Grande Valley bordering Mexico, responded, “This bill is harmful to all of Texas and especially to our border community. We serve a number of individuals with documentation barriers. This bill destroys any pathway for them to receive the care they deserve. Our role as an abortion fund is to help people navigate and overcome the extensive, medically unnecessary restrictions Texas already has in place.” (abortionfunds.org, May 5)

Additionally, “To think that we and anyone who helps someone get an abortion in Texas can be sued by anyone in the U.S. is unfathomable. This is a direct attack on us and the community we serve.”

Elisabeth Smith, chief counsel for the Center for Reproductive Rights, says reproductive health advocates are crafting a legal strategy opposing this extreme measure, scheduled to be enacted Sept. 1. She says, “The law will be challenged with the goal of stopping it from ever taking effect.” (The Guardian, May 19)

Diana Gomez of Progress Texas said: “Let me be clear: Abortion is health care, and it is still legal in Texas. This six-week abortion ban is unconstitutional, and others like it have been struck down by federal courts across the nation.

“Roe v. Wade is still the law of the land; and regardless of whatever bill Gov. [Greg] Abbott signs, no law will stop abortions from happening. It’s unfortunate that anti-abortion politicians were more focused on restricting access to essential medical care this session than providing COVID relief and tackling our failed power grid.” (kxan.com, May 19)

While Texas’ new law will be fought in the courts, reproductive justice activists must be on the alert to the U.S. Supreme Court hearing of a Mississippi case in the fall. This will be the first abortion case the top court will hear with its 6-3 conservative majority. The court will weigh the constitutionality of a 2018 Mississippi law that bans abortion after the 15th week of pregnancy. It could undermine the 1973 Roe v. Wade ruling that legalized the right to choose abortion.

Just as women, people of other genders and their allies fought to make abortion legal, they will continue to fight restrictions on this basic right. No government should ever interfere in health care. Having an abortion is a personal decision about one’s health care. All people who are able to become pregnant must demand the right to control their own bodies. Period.