Joe Biden ended his weeklong diplomatic trip to Europe June 17 and returned to Washington. It revealed what he meant by “America is back.” Washington aims to retain its place directing the superrich ruling class worldwide. 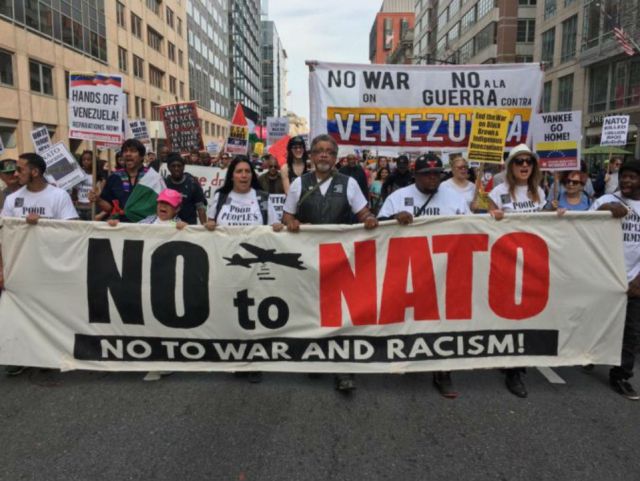 Biden met with the richest and most powerful imperialist leaders in the G7 in Cornwall, Britain. He gave friendly greetings to the militarist NATO military alliance in Brussels. And he held a summit with Russian President Vladimir Putin, his adversary, near Geneva.

The G7 countries are the United States, Japan, Germany, Britain, France, Italy and Canada, in order by GDP. All except Japan are leading powers in NATO.

“Imperialist” is a scientific term describing these leaders and the superrich bankers and industrialists they represent. They dominate the world’s currency, capital, technology and propaganda, which allows them to exploit the resources and labor of the planet. The profits they rob by lending and investing capital, they protect with a monopoly of arms.

Biden and his European and Japanese allies serve the world’s plutocracy. They are members of a cabal, with Biden the top gang leader and the others his local and regional cronies. They are leaders of the extension of the colonial powers that met in Berlin in 1884-85 to divide Africa up into colonies. (See workers.org/2021/06/57014/)

In a position paper on NATO, the Biden administration stated that “many of Trump’s critics, including European leaders, warned that his strong criticism of European allies was damaging NATO cohesion and credibility.” (NATO: Key Issues for the 117th Congress)

Biden’s diplomatic/military initiative in Europe this June was thus aimed at reestablishing relations disrupted by Trump. His Departments of State and Defense, along with the CIA, aim to use the G7 and NATO alliances against Russia and China and to extend imperialist control over Africa, Asia and — if the U.S. can’t do it itself — Latin America.

In the post-World War II Cold War, the U.S. promoted and established NATO as a weapon. Its major task was to prevent worker uprisings in Western European countries like France, Italy and Greece, where there were strong, pro-socialist, working-class movements. Its other task was to confront the Soviet Union and its Eastern European allies.

At the time, the U.S. was the preeminent imperialist power and built command structures into NATO that guaranteed U.S. leadership of any actions. Those structures remain.

In 1967 NATO provided the plans for a coup by Greek colonels that kept a military dictatorship in that country for seven years.

The corporate media and the NATO powers describe NATO’s history as “defensive” against the Soviet Union. Truth is, the Soviet-led alliance, the Warsaw Pact was established only in 1955 and was dissolved in 1991, as was the Soviet Union itself. The U.S. set up NATO in 1949 and has expanded NATO since the 1990s.

In 1999, as it was approaching its 50th anniversary, a U.S.-NATO bomb and rocket campaign hit Yugoslavia for over two months, destroying schools as well as chemical factories and eventually tearing Yugoslavia apart.

NATO forces are still in Afghanistan. NATO helped the U.S. occupy Iraq in the years after the 2003 invasion. NATO carried out the bombing and destruction of Libya and played a role in the war against Syria.

While Biden was visiting Europe, NATO’s “Defender Europe” war exercises moved toward the Russian borders, and the “African Lion” exercises scoured northern and western Africa. NATO’s original 12 have now grown to 30, most new members from Eastern Europe and the former Soviet Union. Far from being for defense, NATO aims at conquest.

Biden’s cabinet members running the imperialist state apparatus are Antony Blinken at the State Department, William Burns at the CIA and Lloyd Austin III at the Defense Department. Blinken and Burns are career diplomats, and Austin a 41-year career officer who was a four-star general when he retired, quite recently. All are trained in a Cold War mentality — which morphs easily into anti-Russia, anti-China policies.

Normal imperialist diplomacy is based on lies and hypocrisy, flattery and bribes, backed by force. Trump publicly demanded more military spending from the European NATO leaders and then insulted them. As reported, Biden spoke softly and sweetly, which likely means Biden assured U.S. allies they would get their share of the loot stolen from the world’s working class. No gang leader could do less.

Biden urged the Europeans to back him against Putin and join with U.S. initiatives blocking Chinese economic successes in the world market. Reports are that Biden offered Putin some concessions. Even if true, these would be aimed at preventing Russia and China from allying against the imperialist offensive.

While Biden and his team speak diplomacy, never forget that the dollar, the Euro, the Japanese yen and the imperialist war machine are lurking nearby to destroy the sovereignty of any existing independent nations and threaten another Cold War against China and/or Russia that could explode in a hot war.