Thousands of poor Peruvians from the countryside and mountains have gone to Lima to demonstrate support for Pedro Castillo, the progressive candidate of the Perú Libre (Free Peru) party who won a narrow election victory for president.

His opponent, rightist candidate Keiko Fujimori, has without evidence been claiming election fraud and wants Castillo’s victory thrown out. Thirty-five special election juries have already rejected over 800 of Fujimori’s 943 petitions, but the National Jury of Elections, as of June 20, has refused to ratify Castillo’s election. In a public statement, retired military officers called for preventing Castillo from taking office. 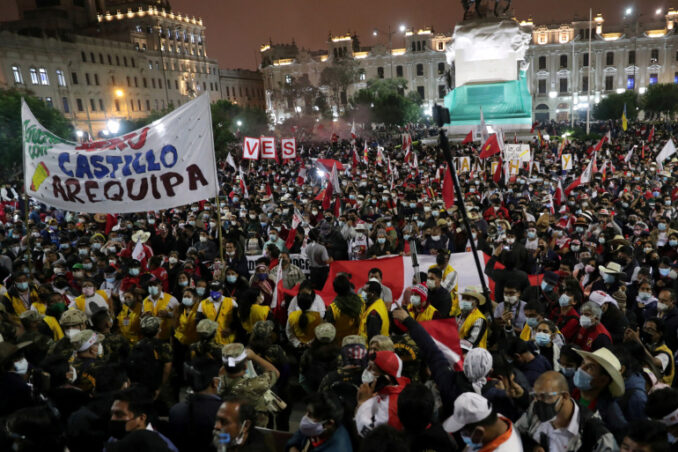 Castillo is a schoolteacher and pro-socialist. His supporters hope his victory by 44,240 votes, or just 50.13 percent, will overturn the decades of right-wing governments, help reduce the inequalities that plague Peruvian society, and weaken the rule of the country’s super-rich. Peru is among the countries most ravaged by COVID-19, with 190,000 deaths out of a population of 32 million.

Keiko Fujimori is an open right-winger who identifies with the policies of her father Alberto Fujimori, Peru’s president from 1990 to 2000, who ruled as a virtual dictator. Since 2009 he has been imprisoned for corruption and charged with human rights crimes. Keiko Fujimori also faces corruption charges.