The December 12th Movement congratulates the New York State Assembly for its passage of the historic Reparations Bill authored by Assemblyman Charles Barron. This “Reparations Remedy” bill, different from any others being considered around the U.S., provides for a Commission with majority representation of community members who have a demonstrated expertise in and commitment to the demand for reparations. It also sets a timetable for rapid implementation of a process which is long overdue.

It is now up to the New York State Senate to act TODAY to complete this stage of the campaign. Any further delay is inexcusable. 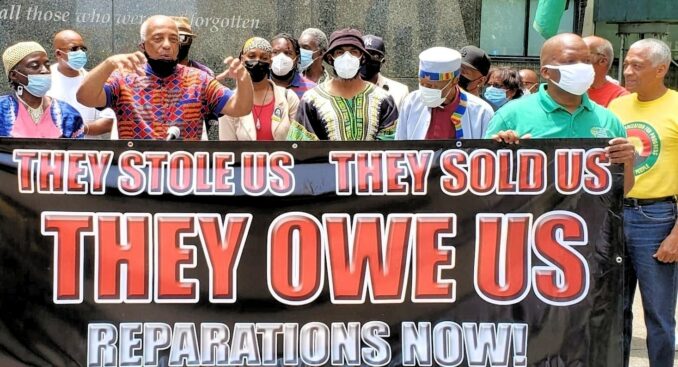 We, the December 12th Movement, who for over thirty years have been waging the fight for reparations, locally, nationally and internationally, in the streets, in the classrooms and in the courts, are honored to be one of the three community-representative organizations (along with N’COBRA and the Institute of the Black World) designated to the Commission.

The Reparations bill complements our campaign to demand an executive order from President Biden providing for a $50 billion down payment on reparations to be directed to the reform of health care delivery systems in Black communities.

On this day, in this period between the commemorations of the George Floyd lynching, the Tulsa Race Massacre and Juneteenth, we celebrate this victory. It is not a time for complacency; it must inspire all of us to push forward with greater commitment, passion, resolve and consistency.

As we said at the 2001 United Nations World Conference Against Racism in Durban, South Africa: They stole us! They sold us! They owe us! Reparations Now!