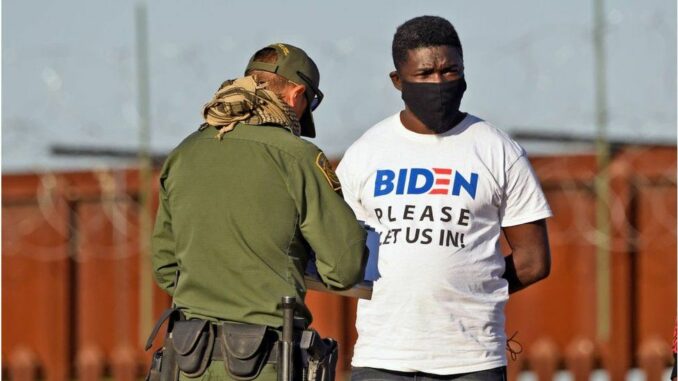 In 1973, Eduardo Galeano wrote what was then a groundbreaking book, “Open Veins of Latin America: Five Centuries of the Pillage of a Continent.” Galeano carefully detailed and beautifully summarized how colonialism and then capitalism, specifically U.S. capitalism, overtook the Americas by chicanery and force to rob and plunder the people of this hemisphere for over five centuries.

If anyone now believes that the migration of children and youth from primarily Central America is divorced from that history, they are very mistaken. It is a history which Vice President Kamala Harris as a woman of color and daughter of immigrants ignores at her own peril.

Migration: a crisis of epic proportions

The current migration of youth and children at the U.S./Mexican border is a humanitarian crisis of epic proportions. It is a crisis not just at the southern U.S. border but around the world, as workers of all ages are forced to leave their homelands as a result of primarily U.S. wars, economic exploitation and climate change.

It is a crisis that helped end a one-time term for Donald Trump, whose premise for his administration was built on the most vile, racist, anti-immigrant platform in U.S. history. Immigrants in the U.S. and their advocates helped defeat Donald Trump, which in turn was a win for Joe Biden. The demand that the Biden administration end the war on migrants therefore is not only just, it is earned.

Parents do not send their young on a dangerous journey on a whim. It is literally a painful, heart-wrenching decision made as a matter of life or death.

When Vice President Harris traveled to Guatemala and Mexico on behalf of the Biden Administration, she said, at a press conference in Guatemala, “I want to be clear to folks in this region for thinking about making that dangerous trek to the U.S. Mexico border: Do not come. Do not come.” (Guardian June 8)

“Do not come” — what an outrageously cynical statement! As more than one migrant has pointed out: “We are here because you were there.”

The forces driving workers, and right now mainly unaccompanied children and youth, to leave their homes and families, putting their lives at risk crossing scorching deserts, confronting drug and organized crime syndicates that include human traffickers, and much more, to get to the U.S. border are deeply rooted in U.S. policy towards Central America.

A report from the Economic Commission for Latin America and the Caribbean released March 4, stated that “Extreme poverty in Latin America reached levels in 2020 that had not been seen in the last . . . 20 years . . .”

This poverty and inequality are nothing new. Yet for decades, the U.S. government has touted the line that it has given millions, in fact billions, of dollars to “help” the people of Central America.

One of the central messages from President Biden that VP Harris was supposed to carry out on her June trip was that the U.S. would continue to send aid to the region. In fact, the Biden/Harris plan calls for a commitment of a whopping $4 billion for Central America according to the NY Times.

But even this ruling-class mouthpiece stated, “Expanded aid programs have failed to stem migration.” (NY Times, June 6) What the Times does not say is that it is that aid and more that has caused the migration.

The Times reported that as Vice President, Biden had led “an enormous push to deter people . . . by devoting hundreds of millions of dollars to Central America.” Where did that money, and the money that every administration had sent before that, go?

Where did billions of dollars in aid go?

The Times continued “. . . in Guatemala, which has received more than $1.6 billion in aid over the last decade, poverty rates have risen; malnutrition has become a national crisis; corruption is unbridled, and the country is sending more unaccompanied children to the U.S. than anywhere else in the world.”

The revolutionary left in Central and Latin America and diverse social activists and the movement here in the U.S. have for decades pointed out that this money has not gone to help the masses. Long before the NY Times found it politically expedient to state, the people’s movement has decried U.S. aid as just one more example of imperialist intervention.

The aid is meant to control and repress; it is meant to defend the corporate interests of Wall Street, which run counter to the interests of the workers and oppressed. As the Times confirmed, “. . . much of the money is handed over to [U.S.] companies,” which use the money more for “salaries, expenses and profits.”

One project, called the Rural Value Chains Project, spent part of its $20 million in USAID funds building outhouses for potato farmers in Guatemala. Most were quickly abandoned or torn apart for scrap metal.

Historically, this aid is channeled through the U.S. Agency for International Development (USAID), founded in 1961 by then President John F. Kennedy. During the revolutionary period of the 1960s and ’70s, the movement in Latin America and in the U.S. denounced USAID and called for its ouster in the region.

Today, it is more of the same. VP Harris may come to Central America with buckets of money, but this will only serve to prop up governments that are beholden to U.S. imperialism. It is an established fact that every time the people of Guatemala, El Salvador, Honduras, Nicaragua or Mexico rise up to fight against repression and exploitation, every time they rise up to try and build a society based on peoples’ needs and not U.S. interests, Washington sends in forces to quell these rebellions.

The U.S. government always manages to help exterminate organizations that fight against capitalism, but it never manages to stop corrupt drug-running governments such as that in Honduras today. Many members and leaders of the Farabundo Martí National Liberation Front (FMLN) in El Salvador, the Sandinista National Liberation Front (FSLN) in Nicaragua and the Guatemalan National Revolutionary Unity (URNG) in Guatemala were assassinated with bullets made in the USA, yet the drug cartels in Mexico and elsewhere can freely operate with impunity.

Perhaps Galeano could never imagine that a woman of color, a child of immigrants herself, would ever be a representative of Washington in Central America. But he would be told that that diverse representation comes not from the kindness of the ruling class, but from the struggle of the oppressed — for representation and for justice.

But no matter the gains that have been made at the end, what matters is what you are fighting for. Just as President Barack Obama became the Deporter-in-Chief, as he deported more immigrants than any other U.S. president, Harris or anyone else will be called out for their complicity.

Without a doubt, the ruling class, the fascists, the top elite are not diverse; the very powerful are white. But in the struggle to break glass ceilings, it must be made clear that the struggle must be to end the system, not to represent that system.

The struggle for migrant rights is a righteous struggle that demands solidarity and support from all sectors in the U.S.

It is time to revive the slogan “U.S. AID out of Central America.” It is time to end U.S. intervention in the region, pay reparations for centuries of pillage and allow the Indigenous, LGBTQ+, women, unionists, peasants and everyone to determine their own destiny free of imperialist domination.