By mYia X and Phebe Eckfeldt 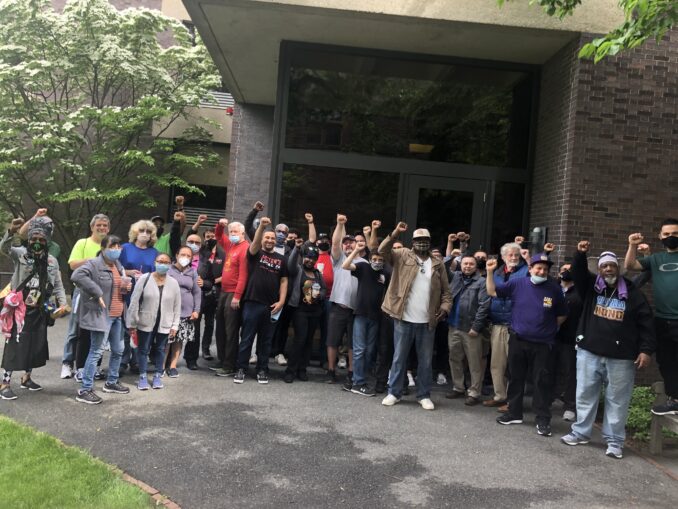 June 3 — Members of UNITE HERE Local 26, which represents Harvard dining hall workers, picketed the Harvard Law School cafeteria today to demand no layoffs. The university has threatened to lay off 15 workers when classes resume in the fall.

Harvard wants to take advantage of COVID conditions at the school and summer period — with most students not on campus. The bosses likely think this timing will limit participation in the struggle by union members and student supporters.

Nonetheless, 50 workers and their supporters turned out. These included maintenance workers and guards who are members of 32BJ Service Employees, Local 26 union staff, Harvard Union of Clerical and Technical Workers, and members of Workers World Party.

“We feed the students. We feed the faculty. And, with this job, we feed our families,” said Local 26 Shop Steward Willie Moore, as he addressed the workers.

Negotiations are currently at a standstill. Local 26 members strongly oppose layoffs andare fighting to prevent Harvard from dividing workers between those at jobs which were subcontracted and those on Harvard payroll. All have, word for word, the same contract except for different benefits.

The majority of Local 26 workers who came out today are veterans of the 2016 strike, which won worldwide recognition for backing Harvard down and retaining workers’ health insurance, plus winning a wage increase. They fought for and won more protection from discrimination for trans workers and immigrant workers.  They proudly won recognition of Indigenous Peoples Day to replace the backward Columbus Day.

Local 26 Chief Shop Steward LaQuiesha Rainey told the crowd that during the 2016 strike, all workers, even those working for subcontractors, fought together as one. The Law School workers shut the dining hall down. Rainey assured them that Local 26 would fight alongside them in their struggle against layoffs.

The doors to the Law School were closed and locked, but undeterred Chief Steward Gene Van Buren pulled out his cell phone and called Dean John Manning, telling him in no uncertain terms that layoffs were unacceptable, and Local 26 would fight them all the way. In the background 50 workers chanted, “We’ll be back!”

“Harvard has hired people who have a reputation of union busting as negotiators for the university, including the chief press person and Dean of Law School. The workers are sticking together and organizing for a struggle against the terrible conditions of this period of pandemic,” Ed Childs, retired Local 26 chief steward told Workers World.