Berta Cáceres, beloved leader of the Council of Popular and Indigenous Organizations of Honduras (COPINH), was assassinated March 3, 2016. COPINH was engaged in a battle with the DESA company, whose plans to construct a hydroelectric dam threatened the water supply of the Lenca Indigenous community. 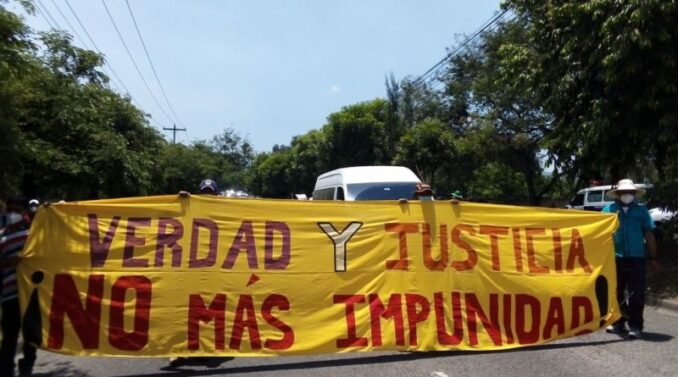 March demands “immediate halt to the energy, mining, tourism and forestry projects that private companies are implementing,” May 17, Tegucigalpa, Honduras.

While seven participants in the killing were convicted and sentenced in 2018, it is only now, five years later, that a key author of that tragic event is on trial. In 32 days of testimony, overwhelming evidence has come to light implicating Roberto David Castillo Mejía, former General Manager of DESA and a former military intelligence officer. This includes eyewitness accounts, documents and communications among Castillo, his co-conspirators and the hit men who carried out the murder.

Castillo’s attorneys are now presenting their side, and the trial is expected to conclude in June. Despite the preponderance of evidence against him, COPINH and other human rights defenders are concerned that Castillo will be found “not guilty” by the panel of three judges hearing the case. As Cáceres’ daughter Bertha “Bertita” Zúñiga Cáceres explained on a recent web meeting, there is “a lot of impunity” in Honduras.

Since the U.S.-backed coup June 28, 2009, that overthrew progressive President Mel Zelaya, hundreds of Indigenous, Afro-descendant, labor union, LGBT, environmental and human rights activists have been assassinated in Honduras. Prosecutions of the perpetrators are extremely rare.

Berta Cáceres was one of over 120 environmentalists murdered in Honduras, the most dangerous country in the world for water and land protectors.

On the call with Zúñiga Cáceres, Camilo Bermudez, a member of COPINH who is assisting in preparing evidence against Castillo, explained the existence of a network that “set up the logistics” for the assassination. He called it “a great advance” that Castillo is even on trial, but pointed to many others who colluded with him as still at large. These include members of the Atala Zablah family, Honduran oligarchs who control DESA and the Agua Zarca hydroelectric project.

For those seeking to bring additional culprits to justice, a not guilty verdict “would put us back to zero,” said Bermudez. The Honduran media is “trying to circumvent the conversation” by smearing Berta Cáceres as a “narco-trafficker.” In an atmosphere of corruption, threats and intimidation and a “sold out” media, the judges may ignore the mountain of evidence against Castillo and acquit him.

There is widespread concern in Honduras about the trial’s outcome. As COPINH states: “Victims and their allies of the deadly Honduran extractive model took to the streets of the country’s capital [May 17] to demand an immediate halt to the energy, mining, tourism and forestry projects that private companies are implementing with the full support of the State through acts of violence and corruption, and without the free, prior and informed consent of the affected Indigenous and rural communities.” (copinh.org)

A feminist encampment erected May 4 in the capital, Tegucigalpa, under the theme “Berta vive” (Berta lives), will be up until the trial concludes. Solidarity activists outside Honduras plan to have actions and send letters to demand Castillo not be acquitted for the brutal murder of a heroic fighter. Visit Honduras Solidarity Network on facebook or hondurassolidarity.org. To send a letter go to bit.ly/bertasigue.