June 12 — The Atlanta chapter of the Palestinian Youth Movement, along with other members of the Demilitarize Atlanta 2 Palestine Coalition, held a spirited rally on the steps of City Hall to present a series of demands. 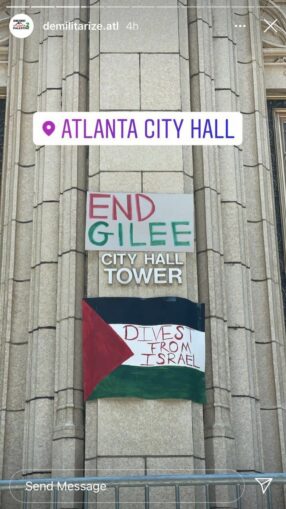 The demand to end the city’s participation in the Georgia International Law Enforcement Exchange program, which sends police to Israel for “counterterrorism training,” was highlighted by all the speakers.

The history of U.S. policing certainly reveals no lack of racist, illegal and deadly practices. Nevertheless, the city government’s collusion with the repressive and brutal policies of the militarized Israeli occupation forces has drawn strong opposition from Atlanta social justice groups for many years.

When Mayor Keisha Lance Bottoms was campaigning, she promised to look into ending the relationship between Atlanta and GILEE. With that promise broken, this revitalized campaign led by Palestinian youth is pushing to sever ties with GILEE — in the city promoted as the cradle of the Civil Rights Movement.