In the Communist Manifesto, Karl Marx and Friedrich Engels describe the degrading character of work under capitalism, whereby workers “are a commodity,” and the worker “becomes an appendage of the machine.”

This was written in 1848, but the dehumanization still exists. A worker becomes an appendage of their work — be it a hotel, a fast food restaurant or an Amazon warehouse. The capitalists only see value in what a worker can produce, not their value as a whole human person.

Correspondingly, the bosses of the sports-industrial complex treat a professional athlete as a mere appendage of the game.

This was underscored recently by the treatment of tennis superstar Naomi Osaka. Since her win in the 2018 U.S. Open, an insensitive — and worse — barrage of reporter comments has compounded her struggles with depression and anxiety. Osaka — whose mother is Japanese and father is Haitian — has been questioned about everything from her race, nationality, age and mental health challenges to her on-court performance against Serena Williams and her principled solidarity with Black Lives Matter.

Osaka was fined $15,000 after declining to participate in post-match media interviews during the French Open. This spotlights, for the umpteenth time, the commodification of even highly paid — and highly skilled — professional athletes. They are chastised and punished when they prioritize their personal well-being over the business of athletic competition.

This is most notably the case with Black athletes and other athletes of color.

Osaka withdrew from the competition altogether “to protect my mental health.”

More than a century of racist indignities

The racist treatment of Osaka is part of a thread running through the entire history of professional sports in the U.S.

In the early years of pro sports, Indigenous players such as Jim Thorpe (football) and Louis Sockalexis (baseball) were subjected to racist abuse. Teams adopted names and created mascots demeaning to Indigenous people and culture. These names are only beginning to be dropped, while some teams, notably the Atlanta baseball and Kansas City football, are steadfastly holding onto their offensive team names.

A bold stand on political issues rarely goes unpunished. Muhammad Ali was banned from boxing and found guilty of draft evasion for refusing to fight in the Vietnam War. Tommie Smith and John Carlos were ostracized for their courageous black-fisted protest at the 1968 Mexico City Summer Olympics. Colin Kaepernick and LeBron James have been vilified for their social justice activism. 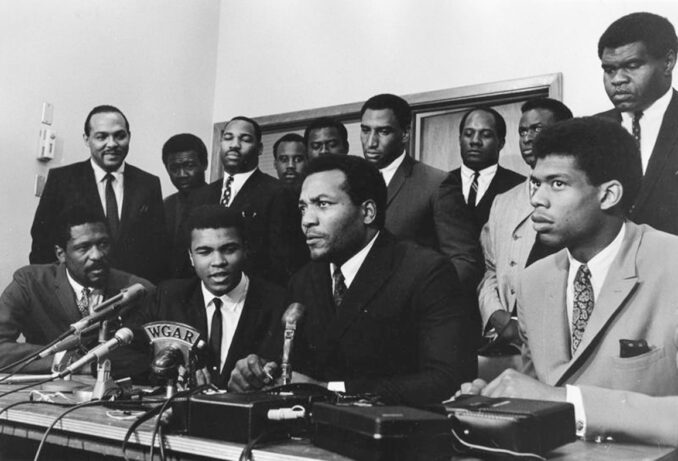 Women and gender-oppressed athletes are treated as second-class players, if that. Not only are they insulted, diminished, marginalized and sexualized, they are grossly underpaid. Megan Rapinoe, captain of the U.S. women’s soccer team, is leading a sex-discrimination class action lawsuit over pay discrepancies between men and women in pro soccer.

Nowhere is the pay differential more glaring than in pro basketball. The base minimum salary in the Women’s National Basketball Association is $58,710 compared to around $925,000 in the NBA.

The WNBA players have stood out for their activism, Their on-court protests for Black Lives Matter have inspired athletes of all genders — and generations — to take stronger positions against white supremacy.

The overarching patriarchal culture in pro sports makes it difficult, even in 2021, for LGBTQ+ players to come out of the closet. A March 2020 study shows half of them experiencing taunts or insults. (salon.com, April 8)

Women, gender-oppressed and LGBTQ+ players of color are doubly and triply abused in the cesspool of bigotry that is professional sports.

In the final analysis, even with high salaries, athletes are still workers and are expected to generate profit — what Marxists call surplus value — for the team owners.

We hail the courage of Naomi Osaka and all those who have taken on white supremacy, misogyny, anti-LGBTQ2S+ bigotry, ableism and the profits-before-people mindset — on and off the playing field.